Tuesday October 29, 2019: On Young and the Restless today, Adam wants nothing to do with Victor, Billy receives a warning from his therapist, and Phyllis can't be bought off. 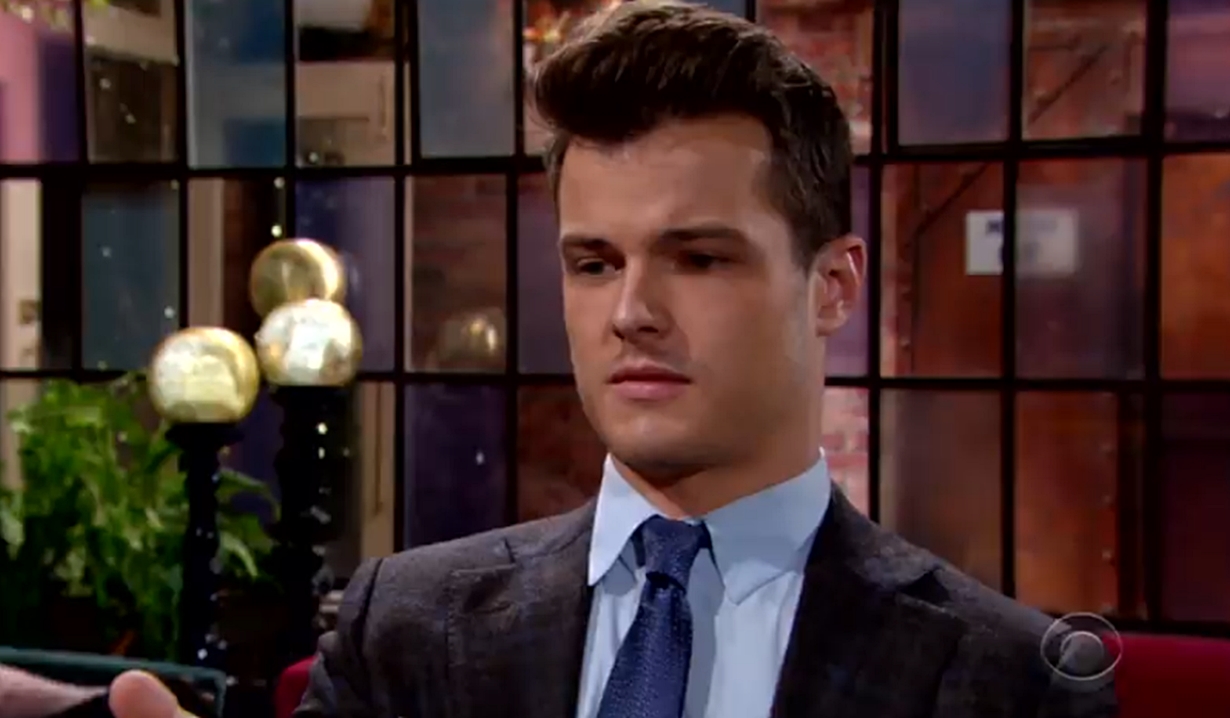 At Crimson Lights, Billy informs Victoria that he ran into Adam, who knows he tried to run him over. Victoria learns they called a truce but feels it’s not worth much. Talk turns to Billy’s psychological battle and she asks if he’s up for Halloween. Billy says if he can face down his real demons, he can handle fake ones.

In the penthouse, Adam disconnects from Connor’s school as Victor arrives – they’ve a conversation to finish. 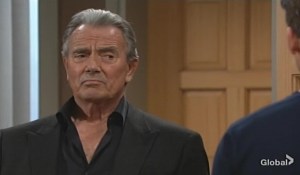 Adam only came back for his son. Victor asks how it’s going with Connor. Adam wishes he could leave town with him; they both hate Genoa City. Victor wouldn’t allow it – Connor needs the stability of family. Adam marvels at him calling the Newmans stable and wants nothing to do with Victor or the family. Victor exits, stopping to look intently at Adam, who exhales once alone.

In their apartment, Lola appears in a towel complaining Kyle used all the hot water. Kyle moves in close to warm her up and suggests they shower together from now on.

At Society, Theo wants to talk business with Phyllis and reports Summer’s last post is blowing up – she’s a genius influencer and should be featured at the next Grand Phoenix party. Phyllis needles about him losing multiple gigs. Theo’s unbothered – he’s always juggling a lot of balls in the air. Phyllis warns to be careful or he could lose…his balls. Later, Lola worries about Theo needing to find a job. Theo acts upbeat, but turns glum when she’s too busy to talk.

At the Abbott house, Jack tells Traci, “We have a half-brother out there somewhere. We have to find him.” Traci worries that Eric Vanderway may not know he’s adopted and feels they should talk to Mother first. She exits and Jack phones Kyle to come by. When he arrives, Jack grills him about Theo – was he close to his dad? Traci appears and urges Jack to come clean. Jack states, “You and Theo might be related.” Kyle learns Dina gave a child up for adoption – he was adopted by the Vanderways and named Eric. Kyle recalls Theo’s father died when they were in high school and he’s from Chicago. Jack looks at Traci – the adoptive parents were from Chicago. Later, Jack and Traci got nowhere with Dina. Traci thinks they should drop it, but Jack disagrees.

At Newman Enterprises, Victoria senses something is bothering Victor when he becomes emotional and teary. She assumes Adam’s done something. Victor won’t discuss it, but wishes she and the rest of the family would give him another chance. Victoria sometimes thinks it would be better if Victor and Adam had stayed out of each other’s lives. Victor asks about Billy Boy, which pleasantly surprises Victoria. He warns if he screws up again, he won’t be so forgiving.

Phyllis arrives at the penthouse. She asks about Connor then wants to get back to business. Adam isn’t interested in working with her and has sworn off all personal vendettas. Phyllis insists now is the time to takeover Newman Enterprises and crush Victor. Adam suggests she move on and fix her life. 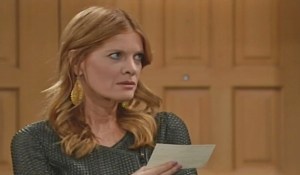 Phyllis argues he can’t deny his authentic self. He offers her Kevin’s number. She shouts she doesn’t want it – no one is as brilliant and diabolic as Adam. He has a way to make her smile – he hands her a check for $2 million dollars and tells her to go away and leave him alone. Phyllis is stunned he’s buying her off. Adam urges her to lead her best, most evil life without him. She rips up the check. “You’re not getting rid of me that easy.”

Kyle arrives in Society’s kitchen, upset, and blurts to Lola that he and Theo could be cousins. 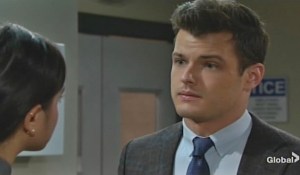 He explains and Lola asks, “What if it’s true?” Kyle’s mind is blown thinking of Dina having a kid with someone while dating his grandfather. Lola believes she can subtly find out Theo’s father’s name. Kyle insists he and Theo share nothing in common – he’ll prove it to her. He walks out and invites Theo to get food. As they eat, Kyle brings up Theo’s dad and his mom. Theo carries his dad’s pocket watch. Kyle looks at the initials – E.V. Theo crows, “That’s my dad! Eric Vanderway.” Kyle looks ill.

In his therapist’s office, Billy assures her he’ll never go to the dark place again. The doctor warns he should stay in therapy regardless – the smallest thing may trigger his trauma and grief again. Billy knows he has a lot of work to do, but feels he can be the man he wants to be.

Billy joins Victoria at Newman as Victor leaves. He updates her on the therapy appointment. She thinks only good things are ahead.

Jack and Traci Discover They Have a...