Christian Learns Adam’s His Father, As Adam Follows Through on Threat

Monday August 5, 2019: On Young and the Restless today, Theo spends time with Phyllis, Mariah cooks up an idea, and Billy opens up to Chelsea. 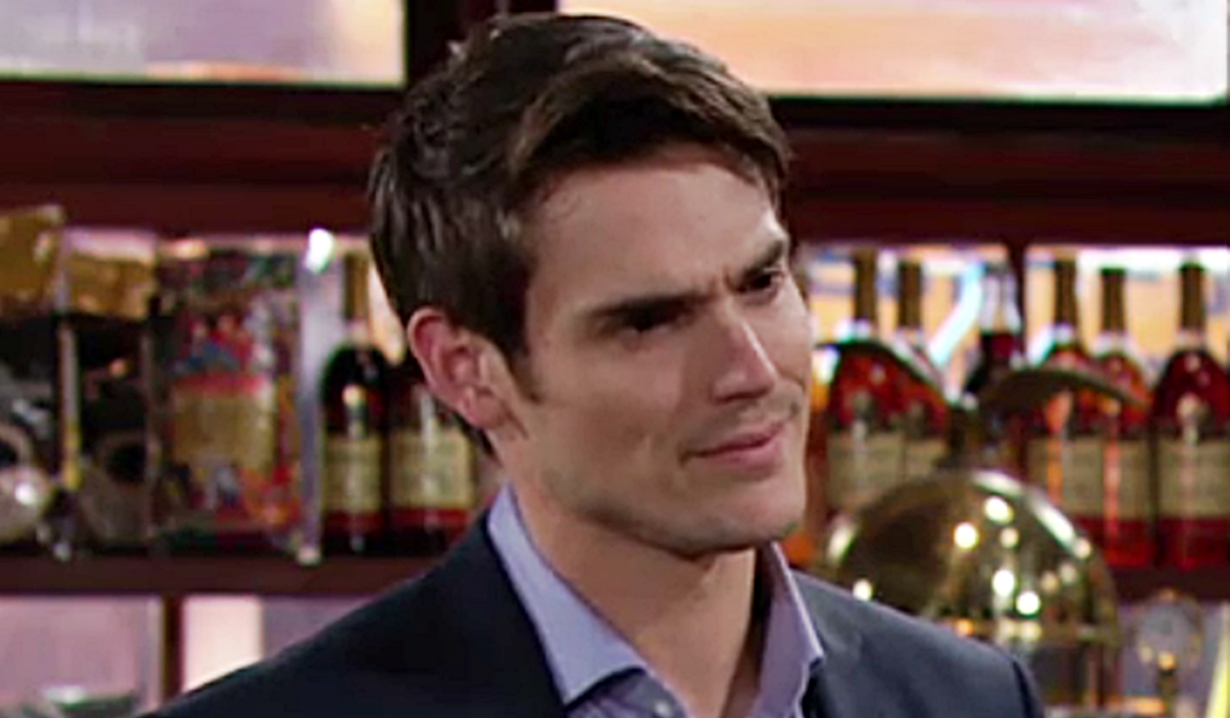 At Adam’s penthouse, Phyllis offers him $10 million for the Grand Phoenix, in installments, once she’s up and running. Adam counteroffers, “$15 million.” He won’t budge so Phyllis heads to the elevator. Michael’s there but can’t divulge his business with Adam. After, Adam thanks Michael for filing the petition with the courts – his first visit with Christian’s today. He reminds Michael he’ll be his lawyer until he steps in as D.A., then thanks him again. Michael eyes him. “You’re welcome.”

At home, Nick learns Calvin’s money is in Chelsea’s account. She hates that her past is still hanging over her head as she wonders what to do with the money. Without Chloe, her business wouldn’t be the same. She vows not to return to the conning life.

At Society Kyle seethes when Theo proposes a bachelor party. He rants about Theo causing problems with Celeste and painting his past in the worst light. Theo shrugs, “I didn’t tell her everything.” Kyle complains he hurt Lola because he wants him back as a party buddy. Theo gets it – he’s moving on. 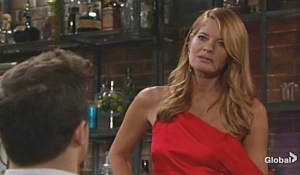 Phyllis interrupts and verbally attacks Kyle for shattering Summer. After, Theo tells Phyllis his plans for the Grand Phoenix launch party. She’s impressed. He’s fascinated by her story because they’re alike. Phyllis is good with him helping her make money, but warns her daughter is another story. Theo calls Summer feisty and capable and they complain together about what Kyle did to her. Theo looks intrigued as Phyllis talks about people telling ‘that’ story about themselves because they can’t face who they really are.

Adam’s holding a soccer ball in Chancellor Park when Billy storms up and tells him he’d better stop what he’s doing. Adam realizes he thinks he broke into his house and put Delia’s doll there and swears he’d never disrespect her memory – it has nothing to do with him and he’s about to visit with Christian. Billy tells him to treasure every moment with his son. Adam phones Nick to tell him the judge ruled that Victoria was in violation – he’ll be seeing Christian and plans to tell him he’s his real father.

At home, Nick fumes as he fills Chelsea in on Adam’s call. She warns him not to interfere.

Mariah joins Kyle at Crimson Lights and updates her on his problems with Theo. Kyle’s about ready to elope. Mariah tells him to get that out of his head – she thinks Theo has a case of arrested development and warns not to let this joker get to him. Kyle mentions Phyllis and Mariah counsels to forget about Snowflake and her witch of a mother – he deserves to be happy. 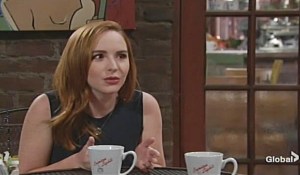 Kyle concedes no one would be better off if he’d stayed in a loveless marriage. Mariah decides she’ll throw him a bachelor party. Kyle’s intrigued but wonders why she’d want to. As Mariah tries to convince him, she ends up announcing she’ll throw a combined bachelor and bachelorette party for him and Lola. Kyle’s stoked. Inside, Nick confronts Michael – his son’s life may be getting blown apart right now thanks to him. He rails at Michael and comes to the conclusion that Adam has something serious to hold over him. What Adam’s about to do to his son is on Michael.

Chelsea finds Billy at Society’s bar. He comments on Calvin dying in his sleep and remarks they should all be so lucky. Chelsea announces she’s staying in Genoa City and is taken aback when he asks about her inheritance. Billy apologizes and notes he’s glad Adam hasn’t lured her back in. Chelsea reveals he offered her a deal to end the custody suit. She feels he was hoping she’d accept, but she and Connor moved on. Billy agrees with her protecting Connor from him. He opens up about Adam’s return stirring up dreams about Delia. Chelsea promises Adam wouldn’t have planted the doll. Billy’s unconvinced he’s changed. Nearby, Theo notes it’s too bad Adam’s reaping the rewards of Phyllis’ hard work. Phyllis alludes to the next thing on her agenda.

Adam plays soccer with Christian in the park. He recalls his dad taught him how to play, though he didn’t know he was his dad at the time. Adam shows him a trick, then asks if he remembers Connor. He tells the boy they’re brothers. Nick appears as Adam says he’s Connor’s dad and he’s his real daddy too.

Sharon breaks up a fight.

Remember when? At this time in 2009 on The Young and the Restless, Phyllis and Nick renewed their vows, Jack and Sharon broke up and Mary Jane spiked Jack’s drink.

Victor Calls Jack for Help During...