Victoria Proposes Bringing Down Adam by Teaming With Phyllis

Friday July 26, 2019: On Young and the Restless today, Celeste comes to a decision after meeting Phyllis and Summer, Victor butts heads with Chelsea, and Rey leaves Sharon. 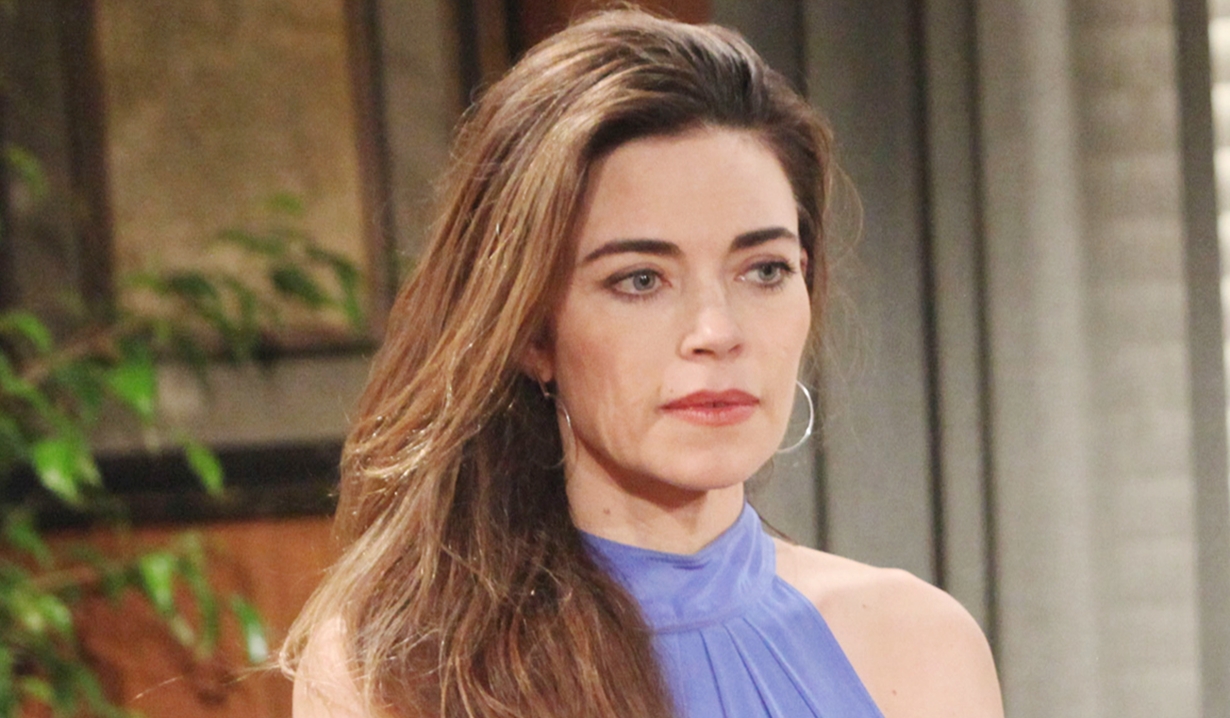 At Newman Enterprises, Victor tells Nikki he’s glad Victoria took Christian in. Nikki rants about the judge removing the child from Nick’s home. They lament Adam tearing the family apart. Victor dozes off then they discuss the grandsons again. Victor worries Nick might be upset with him regarding the video. Nikki leaves but Victor wants to stay.

Celeste approaches Phyllis at Crimson Lights and hugs her – her selfless, angelic daughter saved Lola’s life. “You must be so proud of her.” Phyllis says she is…more than she knows. 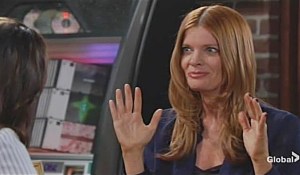 Celeste and Phyllis compare notes on not knowing about the surgery and bond over their children not learning from their mistakes until Phyllis realizes she sounds like her mother. Later, Summer approaches Celeste, who thanks her for her sacrifice for Lola. Summer is honest about the decisions that were made, so Celeste asks, “Is Lola making a mistake marrying Kyle?” Summer hesitates before admitting everything that happened was her fault – Kyle is so in love with Lola there’s nothing he wouldn’t do for her. Celeste tells Summer she’s remarkable – her mother thinks so too.

In her apartment, Lola complains to Rey about Celeste’s judgement – she’s not as protective of Rey and Arturo. Lola points out Rey’s living with a woman with loads of red flags, then apologizes. Rey concedes Sharon has baggage. They talk about the end of relationships. Lola thinks she would survive; she has her work. Rey argues that it’s brutal – the end of a marriage is like death, that’s what Celeste is trying to protect her from. Later, Celeste and Rey rehash him not getting in touch when Lola was in hospital. Rey felt he’d failed, so he waited and prayed. Talk turns to Kyle. Celeste thinks she was wrong about him but worries about his connection to Summer. She announces she’s overstayed her welcome and is going home. Rey pleads unsuccessfully with her to stay. When Lola gets home, Celeste is packed and asks her to let her know how the wedding goes. She loves her very much. Lola is unable to stop her from leaving.

At Chancellor Park, Victoria sees Christian off with the nanny while she phones Chelsea looking for Nick – neither can reach him. Christian and the nanny reappear, then go off again when Sharon arrives. Victoria confronts Sharon about showing up at court with Adam. Sharon explains Adam was concerned about visitation – he deserves to get to know his son. Victoria scoffs – there’s that good judgement Sharon’s so famous for. 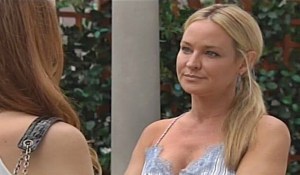 They bicker as Victoria maintains Adam’s dangerous while Sharon argues he was a good father to Connor. Chelsea shows up and wants to put an end to the insanity. They all feel bad for Nick and Chelsea and Sharon tell Victoria things Christian likes. Phyllis appears. “Never fear, Aunt Phyllis is here.” Victoria snarks, “Thanks. We’ve got it covered.” Bickering ensues as Sharon points out Phyllis hacked into the Dark Horse servers to help Adam, and Phyllis counters Sharon walked into court arm-in-arm with him to take Christian from Nick. Phyllis then mocks Chelsea being part of the Scooby Gang after knocking Sharon out. Chelsea goes, and Phyllis baits Sharon about Rey knowing Adam has her wrapped around his finger. Sharon leaves. Phyllis tells Victoria she can’t trust either one of them. Victoria asks, “What’s the deal with Summertime Inc.?” Phyllis plays dumb. Victoria reveals Billy told her she was working against Adam while working for him. She notes Nick and Billy both saw something good in Phyllis and offers to work with her to cut Adam down to size. Victoria guesses she’s transferring assets from Dark Horse to Summertime Inc. Phyllis confirms Adam’s very distracted right now. Victoria muses how they could take advantage of that – as CEO Phyllis can authorize the sale of assets from Dark Horse. Phyllis replies, “If the price is right.” Victoria says, “It would be.” Phyllis will consider it on one condition…

Chelsea arrives at Newman to meet Victor and they discuss Connor. Victor’s decided he wants the boy back in Genoa City. Chelsea asks if it’s a request or an order. They argue about whether he’s safe with Anita from Adam finding him. Chelsea will keep things as they are.

At Sharon’s place, Rey is tense on the topic of Adam. Sharon wants peace and argues this was a crisis situation. Rey scoffs – it was created by Adam – and thinks Nick is right that Adam gets in her head. He compares her to Mia, who fell in love with two brothers. Sharon insists she only loves Rey. He can’t keep doing this dance – they both know how this is going to end. Sharon asks, “Rey. What are you saying?” Rey packs his bags – he can’t save her if she won’t save herself. Sharon protests and kisses him. He kisses her back then rushes out the door.

Rey and Adam square off.

Do you remember on July 25, 2008, on The Young and the Restless, David drugged Nikki’s drink as they discussed their divorce and Chloe told Cane and Lily she was pregnant with his baby.