Friday July 19, 2019: On Young and the Restless today, Lola wants the truth from Kyle, Phyllis confronts Summer about her coldness, and Michael negotiates with Adam. 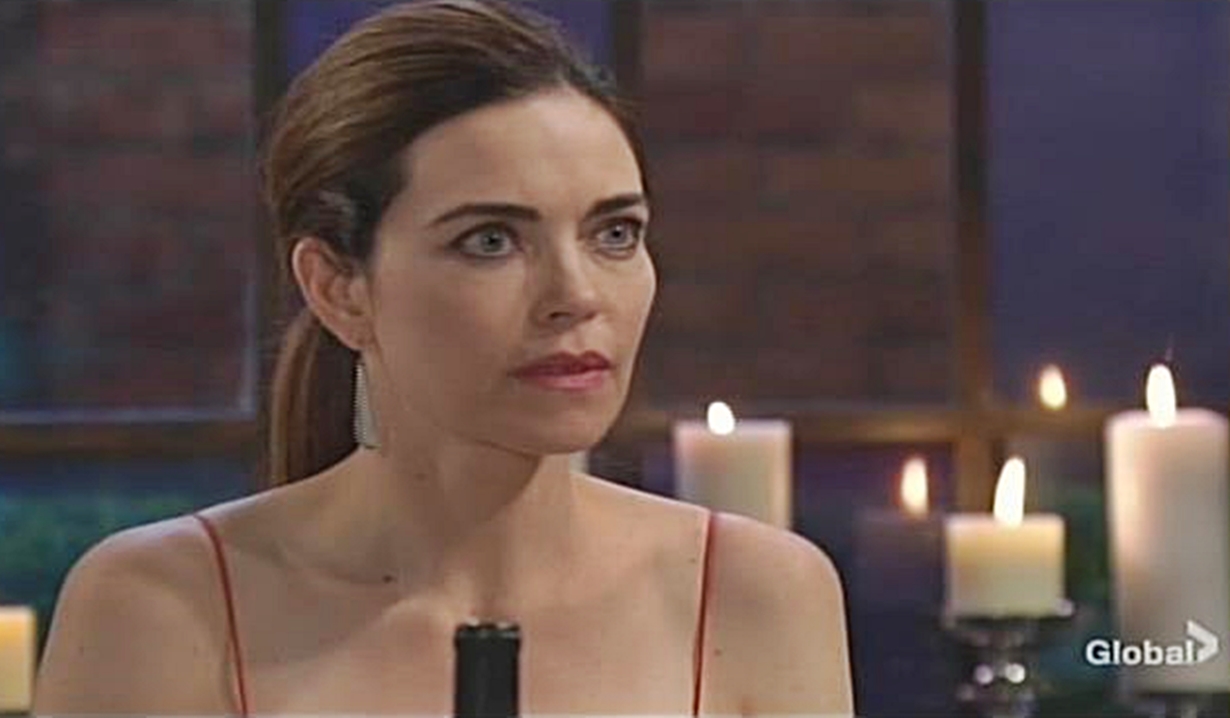 Adam arrives at Dark Horse, where Phyllis updates him that Rey Rosales knows about his connection to Chance Chancellor. She warns if something happened that would look bad in family court, Nick probably knows. Adam questions her helping him. Phyllis says that’s what good partners do and asks what he did with Chance. Adam smirks and thanks her for the information.

At Nick’s place, he and Chelsea remark on Victor wanting her at the dinner. Chelsea only cares what Nick thinks – he can’t afford to lose allies while facing a fight with Adam.

At Society, Victor and Nikki admire the dinner table and she assures him that no one will judge him tonight. Abby appears with Nate, and Victor’s pleased they’re dating. Victoria and Billy arrive. Victor tells Billy he’s welcome. Victoria balks when Victor mentions seeing something she may have missed on the Randolph merger. She reassures him, then Chelsea and Nick arrive. Abby introduces Chelsea to Nate, and Nikki recalls at Chelsea’s last family dinner they learned she and Nicholas were engaged. In the kitchen, Lola asks Theo about Kyle’s life in New York. Theo tries to put her off but Lola wonders what went on there. Theo insists it was no big deal and there’s no cause for alarm. Lola asks if that’s true, what is there to hide? Theo decides to tell her the truth.

At Crimson Lights, Summer feels Kyle’s about to warn her about Theo, but she knows who he is and what she’s gotten herself into. Kyle muses, “Yeah. I’m not so sure you do.” He says Theo knows how to work people and can suck you into a party that lasts two days – he is dangerous. Summer has no interest in settled and boring.

Summer listens at Society’s kitchen door as Theo tells Lola he and Kyle partied a lot and there were many blondes. After, Summer accuses him of lobbing grenades into Kyle’s relationship. Theo’s unapologetic and they kiss. He says, “My room. Now.” Summer grins – she has to go. In the dining room, Victor goes around the table expressing appreciation for each person beginning with Nikki. Summer joins them and is included. 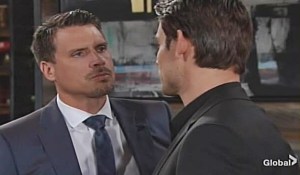 Suddenly, Adam appears, with Phyllis, and asks, “Gee Dad, you don’t have any kind words for me?” Victor reminds him he distanced himself. Phyllis urges Adam to walk away. Adam zeroes in on Chelsea. Nick stands up and tells Adam, “Time to go.” He and Phyllis retreat to the bar. Summer complains about her mother becoming Adam’s evil twin, but Billy says she told him things aren’t as they seem. Victoria feels Phyllis only cares about herself. At the bar, Adam thinks the night’s still full of possibilities. 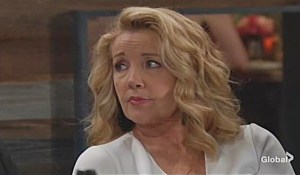 Phyllis convinces him to leave but stays to talk to Summer and complain about her daughter’s emotional exile. Summer asks her to cut ties with Adam and return Dark Horse to Nick. Phyllis doesn’t own the company and accuses Summer of emotional manipulation. Summer learned it from her. Phyllis tearfully calls her a stellar pupil. Meanwhile, at the table, everyone’s stunned when Victor tells his children he’s kept them long enough; they have a full day’s work ahead of them. He recalls it’s nighttime and assures Nikki he’s fine.

Kevin enters Adam’s penthouse with the envelope and starts placing a call. Michael grabs his cellphone and hisses, “What the hell are you doing?” Kevin explains Adam has compromising photos to bribe Judge Sanders and wanted him to blackmail him. 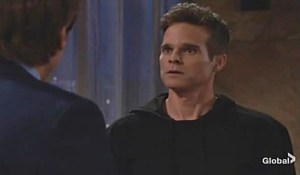 He explains his plan to use the photos against Adam and have him arrested. Michael asks what’s to stop Adam from announcing Chloe’s alive or exacting retribution from behind bars? Michael takes the envelope and after a struggle, deletes the photos off Kevin’s phone – he will deal with this. Later, Adam arrives and assumes Michael’s there to turn the tables on him with the photos. Michael’s there to save Kevin from himself – he wants to make a deal.

At Crimson Lights, Lola wants Kyle to tell her about New York – she needs to know who he really is before she can marry him.

In bed at home, Victoria’s reading when Billy has a bad dream. He thinks it might be stress. She turns off the light, but Billy stays awake.

At Nick’s place, Chelsea’s determined to do right by Connor and is grateful Nick’s in her corner. He says she can count on him. She kisses his cheek goodnight, but looks back at him afterward.

Nick arrives at the custody hearing and tells the judge that something came up with Michael Baldwin.

Remember when? On July 18, 2007, on The Young and the Restless, William died after accusing Gloria of holding him hostage, but not before he professed his love to her.

Lola Digs Into Kyle’s Past in New...