Friday July 5, 2019: On Young and the Restless today, Nick gets a distressed call from Chelsea, Devon makes a new hire, and Billy has a flashback at the carnival. 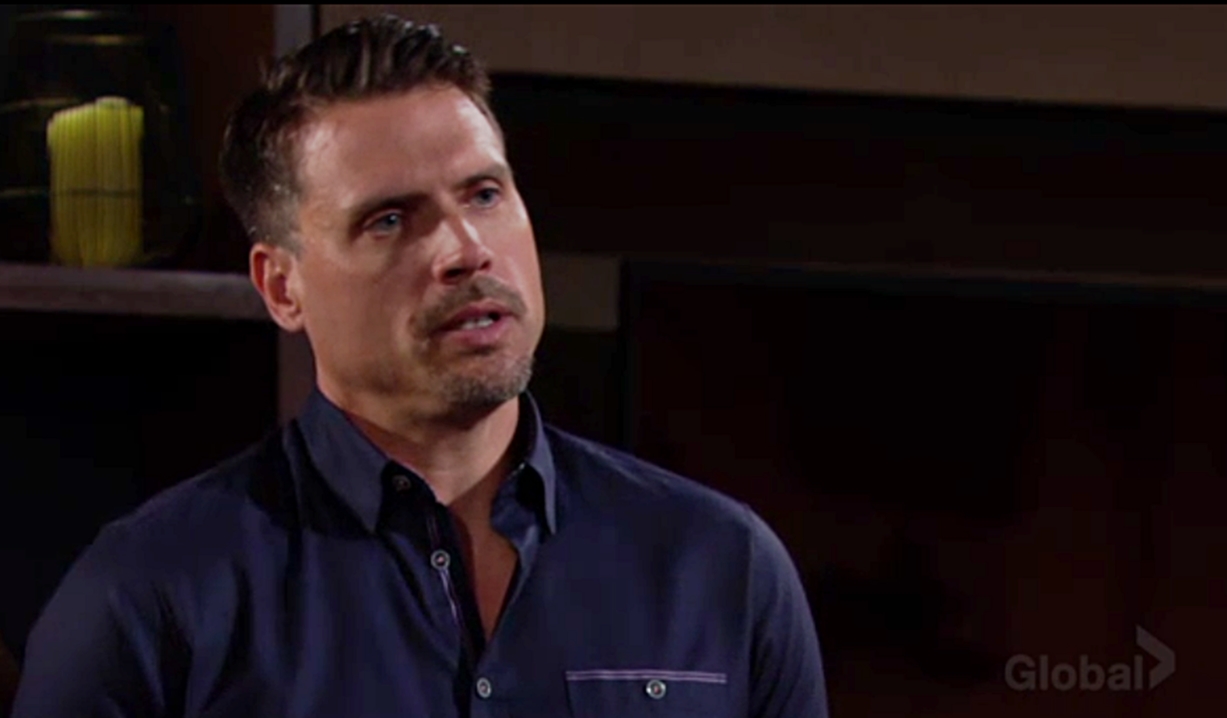 Billy visits Victoria at Newman Enterprises. She realizes she was supposed to meet him for his birthday dinner and apologizes. She shows him something on the laptop – this is what having power looks like. It’s a Dark Horse building that’s empty as she persuaded the tenant to move to a Newman-owned one. Billy kisses her and has an idea.

In their suite, Calvin tells Chelsea he made a stop to see Adam before joining her at the restaurant. She asks if he was testing her. Calvin was worried for her safety and admits he felt for Adam. 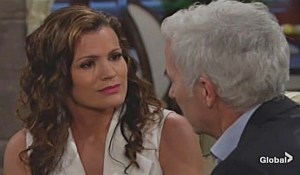 He’s decided Connor should be with his father. Chelsea is outraged and assumes Adam threatened him. Calvin denies it. They argue heatedly as Calvin wants to give Adam custody of Connor. Chelsea will never give up her son. Calvin points out Johnny’s being raised by his father. Chelsea gapes – that’s totally different. Calvin wants space to have a child of their own. Chelsea reels.

Adam finds Phyllis drinking alone in his penthouse and asks, “Did anybody show?” Phyllis wants to focus on the new hotel they’re opening. Adam toasts to being outcasts…who needs friends when you can have enemies? He needles Phyllis about Summer and Nick not coming to the party. Phyllis explains Nick still blames her for Chelsea’s departure but won’t elaborate. She leaves to go to Dark Horse. Adam gets a text from Kevin that Chelsea’s with an old guy. Adam advises to keep his eyes and ears open.

In Devon’s penthouse, Ana shows off Tessa’s video. Elena loves it. Devon feels it had a lot of energy but complains the sound wasn’t good. Ana explains they wanted it to sound authentic. He argues you can have that without compromising sound and accuses her of distributing it when he was distracted. He reiterates she’s not ready to do this on her own. Talk turns to her drinking and Theo. Summer admits she went into emotional overload about Kyle and Lola and he couldn’t get away fast enough. Nick suggests she talk to him and be clear about what she wants. Summer wonders if he’s referencing anyone. Nick says, “Chelsea is back.” Nick’s fortune cookie says, ‘An old love will come back to your life’ and Summer gets chills. Nick recaps Chelsea’s departure and admits he’s happy she reached out. Summer toasts to the single life. 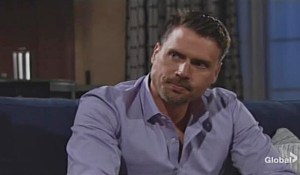 Summer eats takeout with Nick at home and marvels at how well he’s taking things with Adam and her mother – she doesn’t know how she sleeps at night. Nick doesn’t want her in the middle, but Summer feels Phyllis is different this time; she doesn’t care who she hurts.

At Society, Elena wishes Devon had given Ana more time to explain herself. Devon says the industry’s tough and she’s green. She softens. Devon wishes he didn’t have to leave town tonight. Theo appears to discuss a meeting with Devon…he assumes it’s about Tessa’s video, but Devon wants something entirely different. They talk music and Devon introduces him and Elena. Theo agrees about the muddied sound on Tessa’s video but talks up the tie-ins. Once alone, Elena loves Devon’s passion for what he’s doing. They kiss and she heads to work. Ana arrives and Devon explains he’s bringing someone in to mentor her because she has such potential. He points to Theo. Ana’s offended – he tweets all day. They all sit down, and Theo agrees to consider it. Ana still thinks he’s a professional party boy. Devon leaves. Ana explains her position to Theo, who claims he wants to help her succeed. Ana relents.

At the carnival, Billy tells Victoria they’ll go on every ride and play every game. At the shooting range, Billy flashes to taking the gun from the Abbott mansion and Adam coming to Delia’s grave. Adam strolls nearby and Kevin texts that EMTs just got called to the Club.

At Nick’s, Summer sees a photo of Theo at Society and decides to head down there. After, Nick gets a frantic call from Chelsea – her husband is dead!

Summer arrives at Society in time to see Theo and Ana sharing a toast.

Nick arrives at Chelsea’s suite, followed by Adam, who sees her in his brother’s arms. Phyllis appears and says, “Oh man. Tough break.”

Adam tells Chelsea there are no more roadblocks; they can finally get back on track and be the way they were meant to be.

Adam Vows to Get Chelsea Back No...