Thursday July 4, 2019: On Young and the Restless today, Phyllis frets about her relationship with Summer, Traci and Cane make plans, and Tessa's video goes viral. 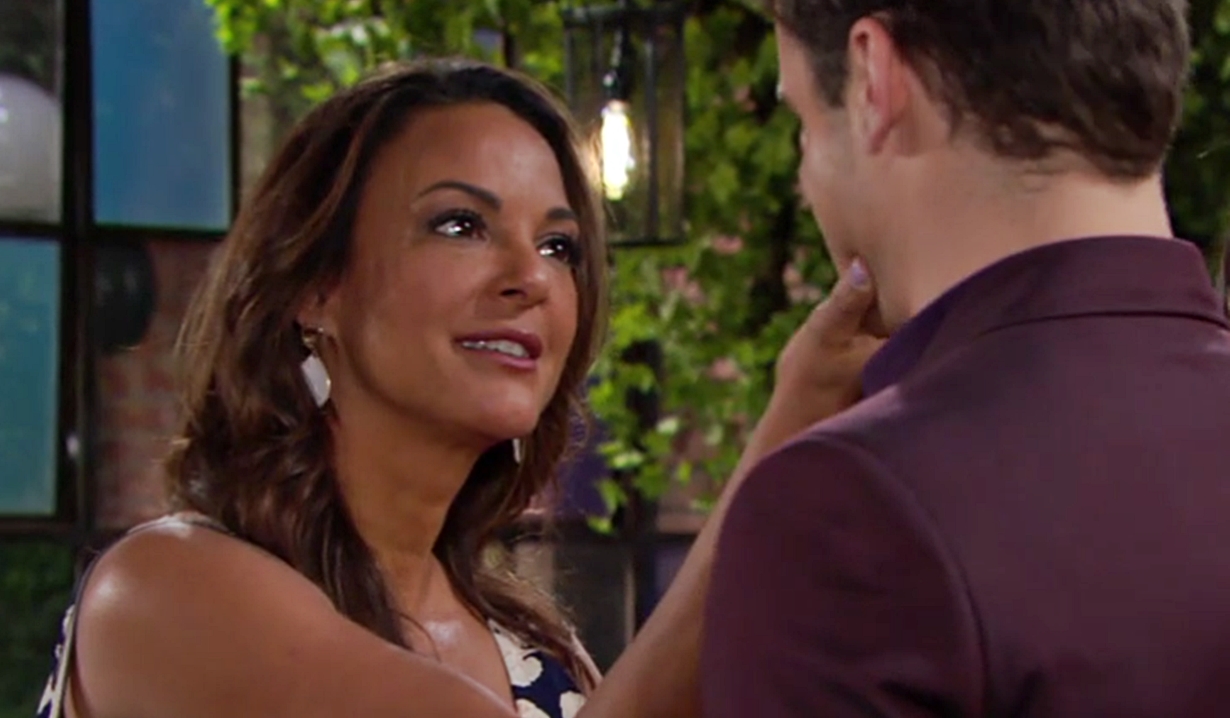 Phyllis awakens in her suite to find Summer’s gone to meet with Jack and Kyle. Phyllis whispers, “Happy Fourth of July,” and makes an exploding gesture.

At Society, Kyle tells Jack that Summer’s been going a little hard lately. Talk turns to Celeste, and Kyle and Lola’s lie about living together. Phyllis arrives looking for Summer. Kyle leaves and Jack tells her Summer was too hungover to contribute to the meeting. 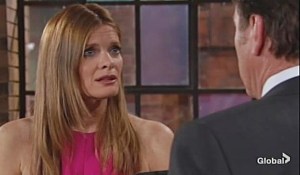 Phyllis cries that her daughter only wants her when she’s miserable. Jack clucks that parenting isn’t easy then compares Phyllis comforting Summer last night to a one-night stand. He suggests she try changing her entire personality. Phyllis advises him to try going straight to hell. Jack tells Phyllis she’s bitter and may need a reset. Phyllis insists he’s wrong and invites him to Adam’s party tonight to see for himself.

In the apartment, Celeste enthuses to Lola about going to the Abbott’s and wonders if Jack’s as handsome as he looks in magazines. She muses it must be hard for her and Kyle to steal private moments and Lola blurts that they were living together until last night. Celeste admits she had a strong hunch. They spar verbally about cooking and Celeste reminds her she likes it hot.

Ana arrives at Crimson Lights and enthuses that Tessa’s video is blowing up online. Mariah’s impressed and asks if Devon’s excited. She learns he didn’t know it was being released…he hasn’t even seen it, and asks Ana if she’s crazy. Ana placates that Devon’s been busy with other things. 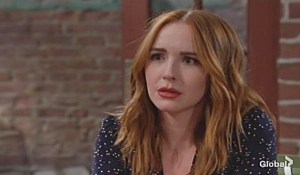 Tessa thinks she was right to go ahead. Mariah feels Devon will give her hell, but they should celebrate. Mariah stays behind on her own and Kevin arrives. Kevin updates her his situation is still a mess but his attitude’s improved. Mariah warns the power of positive thinking doesn’t work. Kevin retorts, “Tell that to Oprah.” They head to the carnival.

At the Abbott house, Traci reassures a nervous Kyle about Celeste’s impending visit. Lola and Celeste arrive. Kyle introduces Celeste and Traci. Lola tries to speak to Kyle alone, but he goes on about how delightful it is to live with his loving family. Finally, Lola and Celeste tell him the jig is up and laughter ensues. Celeste assures him the lie doesn’t change how she feels about him, but he can’t come home – her plans haven’t changed. Traci’s talking about her book when Jack arrives and introduces himself. Celeste gushes, “The one and only.” Cane arrives to join the celebration and Jack looks perplexed. Cane enthuses about 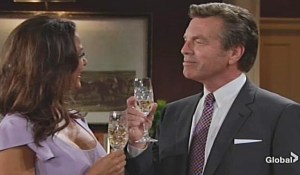 Society to Lola as Jack finishes Celeste’s tour. Jack toasts to two families joining together and to Celeste. Kyle adds that he wanted to make a good impression on Celeste and promises to love, honor and treasure her daughter for the rest of his life. He owes fate big time. They toast to fate. Lola and Kyle share a kiss. Later, Kyle and Lola talk about Celeste wanting to live with her until the wedding. He wonders if she wants him out of Lola’s bedroom. Celeste reappears and wants to see fireworks on TV. Kyle suggests the carnival, but Celeste would rather go home. Lola will see her there later. Once alone, Lola proposes they make their own fireworks. Kyle kisses her.

Phyllis calls out for Adam in his penthouse as caterers bustle about. She spots a note with her name on it – he’ll try to make it when he can. Lauren and Michael arrive, late, and Lauren expands on why people may not be attending. Phyllis finds a moment to tell Michael she knows Kevin kidnapped her. Jack arrives and wonders if he came to a wake, and chuckles that Adam was a no-show to his own event. Later, Phyllis leaves Summer a voicemail inviting her, while Lauren updates Jack that something odd is going on between Phyllis and Michael. Everyone leaves and a distraught Phyllis watches the fireworks alone.

At the carnival, Mariah tells Kevin about Tessa’s video’s success. She’s about to introduce him to Ana and Tessa when they walk up, but he takes off. Mariah’s mystified. Suddenly, Tessa’s song plays, and they freak out. Kevin reappears – he paid them to play it. Nearby, Cane suggests Traci write a sequel for Flynn and Velma, who have great chemistry. Traci muses the carnival would be a great setting for them as she envisions it. She talks about going back to New York soon. Cane will be there for a seminar and suggests they get together. Traci thinks it sounds wonderful.

Victoria Squares Off With Phyllis As...