Chelsea Wants Adam to Let Her and Connor Go

Monday July 1, 2019: On Young and the Restless today, Phyllis identifies her captor, Nick and Phyllis discuss Chelsea, and Devon flashes to memories of Hilary while packing her things. 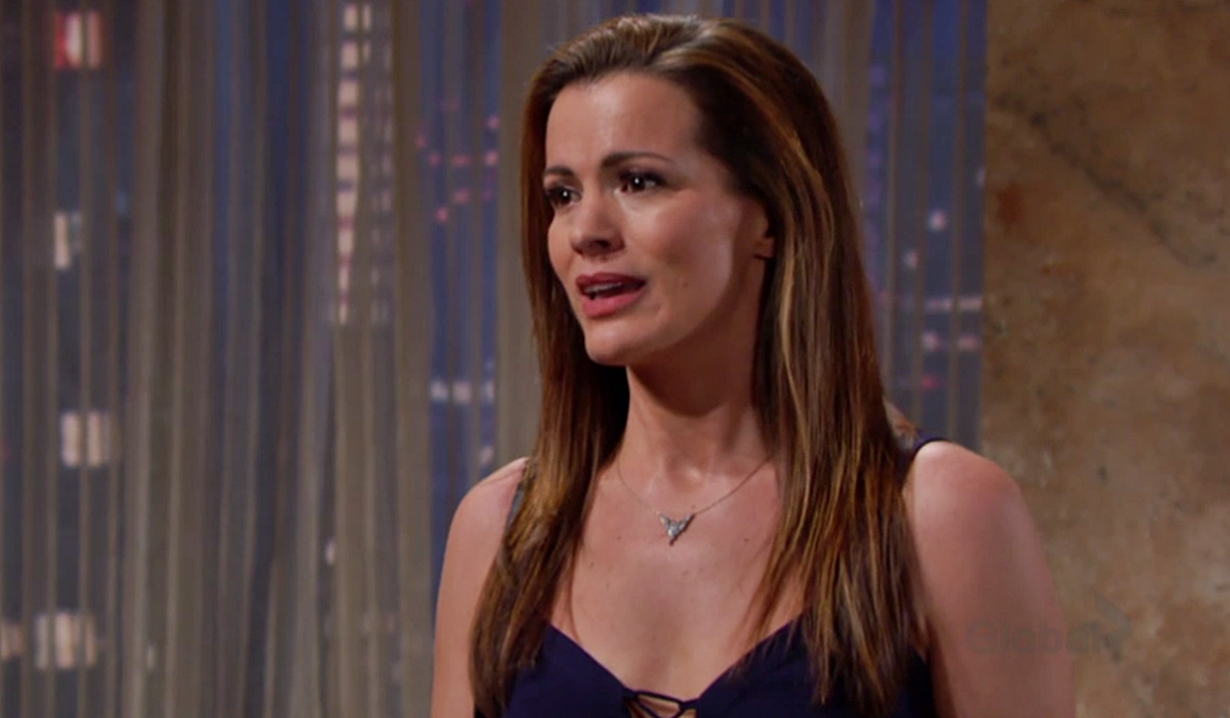 At Dark Horse, Nick asks Chelsea why she’d come there. Adam thinks she came for him. Chelsea’s tired of running. Adam wants Nick to get out, but he won’t. Chelsea stares at Adam and tells Nick she has to talk to Adam alone. Nick exits, and Adam strokes Chelsea hair and kisses her – he’d almost given up hope. He takes her hand and says, “Let’s go home.”

At Society, Kevin tries to duck out when he spots Phyllis, but she calls him over to help with a computer issue. He sits beside her and she reveals Adam put her in charge of Dark Horse. As he leans over the laptop, she smells his cologne, grabs him by the collar, and hisses, “You sonofabitch! It was you!” As Kevin protests, she rants that he locked her up in a basement and demands to know the real reason he’s back in Genoa City. 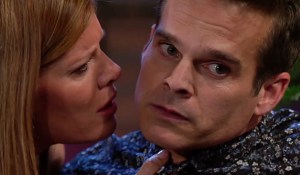 Kevin maintains half the men in town wear that cologne. Phyllis warns this isn’t over. He leaves as Nick arrives. Phyllis asks what he wants to blame on her now. He reveals Chelsea’s back and she’s with Adam. Phyllis thinks it was only a matter of time. Nick grumps about Phyllis running Chelsea out of town; they’d probably be married by now. Phyllis didn’t want to hurt him with the truth about Christian’s paternity and Chelsea used that against her – she stole and lied. Why is he so quick to defend her? Phyllis recaps that Adam is back, and he is Christian’s father and the love of Chelsea’s life. Nick notes there was also a time he thought they would end up together. Phyllis acknowledges she’s now the devil and warns him to take off his blinders where Chelsea’s concerned. He admits he has things to say to her.

Ana arrives at the penthouse to find Elena puzzling over a box of Hilary’s things. Ana says she and Nate spoke to Devon about his panic attack and he decided to move her things. Elena worries it was too soon. Devon enters. He talks about an episode of GC Buzz where Hilary ad-libbed the whole show. 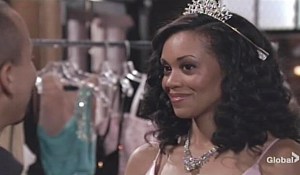 Elena and Ana listen as he tells the story of Hilary helping a girl feel better about being body-shamed, relating it to her own experiences as a girl. The women are impressed. Devon places the DVD in the box and thanks them for helping him get to this point. He flashes to Hilary’s first day on set, then tells Ana and Elena about giving Hilary her prom and about Hilary helping Shauna. They have a group hug. Later, Devon thanks Elena for helping him take the donations to the church – she’s brought him out of the dark. They kiss.

Chelsea and Adam arrive at his penthouse. He wants to make this place a home again, and asks about Connor. Chelsea updates him on the boy, who’s at sleepaway camp. Adam wants to go get him, but Chelsea says, “Stop. That’s not why I came back.” He asks, “Why then?” Chelsea wants him to let her go – it’s been three years. Adam knows she has entanglements to deal with. Chelsea can’t throw everything away – their forever ended when he died. Chelsea explains she was in survival mode for a long time. Adam still wants their happy ending. 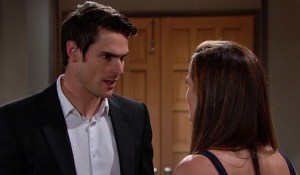 Chelsea doesn’t want to go back. Adam asks if she loves her husband. Chelsea doesn’t owe him an answer. Adam deserves to know – Calvin is raising his son. Chelsea feels if Adam loves Connor, he’ll leave him in a stable situation. Adam wants to be with her. She begs him to put Connor first. Adam doesn’t want him living a lie…like he did. He predicts when Connor finds out the truth, he’ll blame Chelsea – when Hope told him about Victor, he felt betrayed. Chelsea vows Connor will never know he’s a Newman. Adam warns there’s nothing he won’t do to reclaim his son. Talk turns to her romance with Nick. Adam feels his brother knows she loves Adam without fear or judgement. Chelsea says that was true, but not anymore. She walks out, leaving Adam shaken.

Mariah spots Kevin at Crimson Lights and teases him about not telling her he was in town. Kevin complains about messing up his life. She offers to fix his problems and reveals she’s running Power Communications. Kevin’s so proud. Kevin reveals he’s pissed off powerful people – it’s better she doesn’t know who. Mariah doles out some advice about Kevin taking charge of the narrative.

Chelsea Stops Adam and Nick From...

Chelsea Reconnects With Nick and...