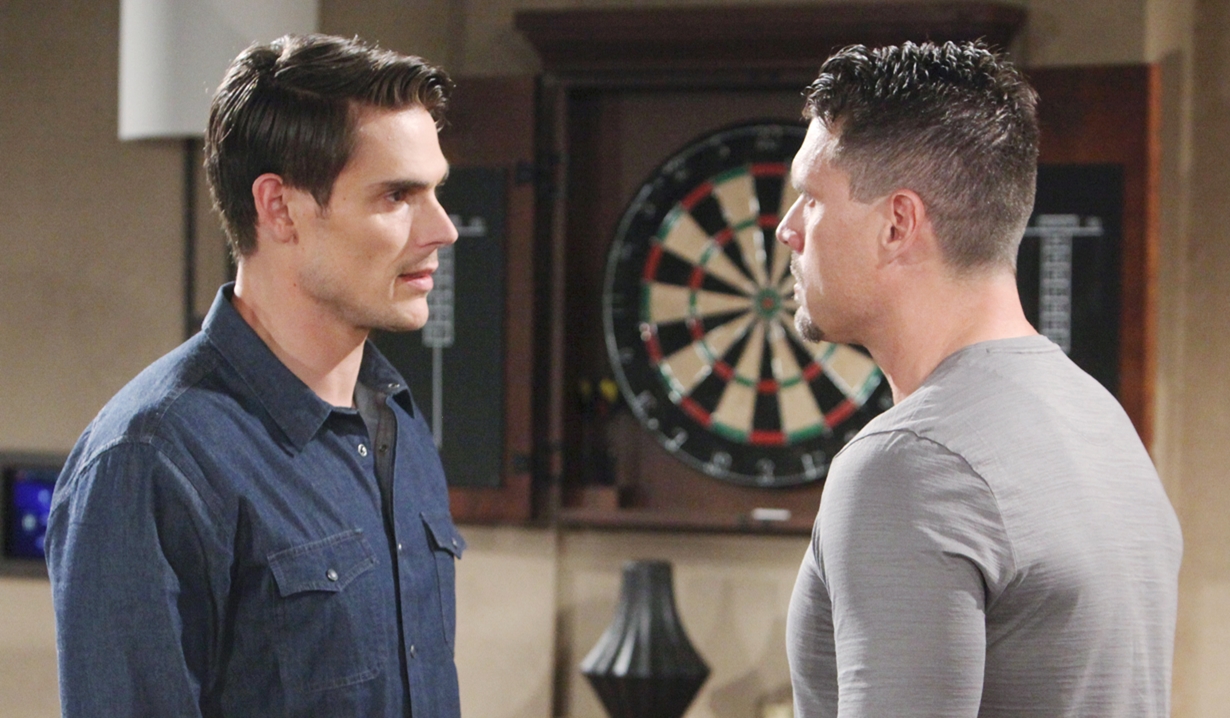 At Delia’s gravesite, Billy says, “Chloe.” She replies, “It’s really me.” He realizes she shot Adam. Chloe needs Billy’s help, he’s the only one she can trust. Billy stammers about her being dead. Chloe doesn’t have much time – she must get back to Bella. She cries that she was unable to ignore it when Adam turned up alive and admits she shot him, and he took her prisoner. He let her go because of Kevin – she thinks Adam’s using him to do his bidding. 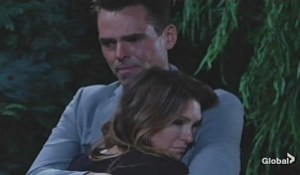 Billy says he’ll take care of it, and debates with Chloe about coming out of hiding and getting a good lawyer. Chloe protests – it would ruin Bella and Kevin’s lives. She pleads with Billy to let someone else take care of Adam – she only needs him to ensure Kevin comes home to her. Billy agrees. Chloe reveals Esther knows and will be with her. They embrace. Billy will be in touch.

At the penthouse, Nate and Ana debate what to do about Devon. When he arrives, they confront him about the panic attack. Cranky, Devon says he’ll make an appointment with his therapist when he gets time. Ana holds photos of Hilary and says he has her coffee cup in the kitchen like he’s waiting for her to come home. Nate counsels that he needs to be free. Devon snaps; he’s got this. Ana argues he’s in trouble, but she and Nate head out. Devon stops them and pulls out DVDs – GC Buzz episodes he watches to hear Hilary’s laugh and see her smile. He wants to see her and keep the memories alive. Ana advises the memories live in him, not in things. Devon knows Hilary and Neil won’t come back. Ana urges Devon to clear a path with the strength they gave him. Later, Devon starts boxing up the DVDs, but stops, and leaves.

At Society, Phyllis tells Sharon she’s running Dark Horse and invites her offer congratulations. Sharon congratulates her on stabbing someone in the back. Phyllis shrugs; she was offered a job by the new owner and took it. 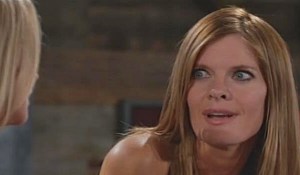 Sharon accuses Phyllis of bringing Adam to the dark side. Phyllis laughs – so if it wasn’t for her, Adam and the Newmans would be sitting around a campfire singing Kumbaya? She wonders what Rey thinks of Sharon’s unconditional love for Adam. Sharon scoffs at Phyllis being CEO – she’ll probably mess it up along with everything else. Phyllis needles Sharon about her attraction to Adam and wishes her luck trying to forget that bad boy’s alive.

At Crimson Lights, Adam and Kevin want to be done with one another. Kevin hands over the laptop. Adam watches the video of Nick removing his JT mask, and smiles. Kevin says, “Okay. Now let’s talk.” Adam muses this is just what he needed but tells Kevin he’s too valuable to let go. He points out Phyllis doesn’t know Kevin’s the one who kidnapped him and imagines what she’d do to him if she found out. Adam says he’ll be in touch, then runs into Sharon, who confronts him about hiring Phyllis. Adam wants to add Phyllis to the list of things they don’t discuss. He always disappoints Sharon and thinks they should stay away from each other. Sharon’s stunned. Later, Phyllis bumps into Kevin, who acts agitated, then rushes off.

At Nick’s place, Rey reveals that Riza told him she was done answering questions, has moved on, and suggested he do the same. Nick feels Rey should approach her in person. As Rey leaves, Nick gets a text from Adam to meet. 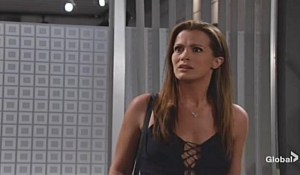 At Dark Horse, Adam shows Nick the video and tells him to bring Christian to his house tonight. Nick says Christian’s not going anywhere. Adam reiterates, “You lost.” Nick says the police already know. Adam will use it to prove he’s unstable. They argue about who Christian belongs with and are about to get into fisticuffs when Chelsea enters and shouts, “Stop it right now!”

At home, Sharon lounges with Rey and suggests they go away for a few days. Rey has to go to Vegas. She realizes he’s snooping about Adam and insists they need to get away. Rey notes she sounds like she wants to run away. Sharon decides she’ll go with him and they make out and undress.

Kevin joins Chloe at Delia’s gravesite. It’s hard to say goodbye to Delia. Kevin loves her and assures her everything will work out.

Billy enters the Abbott house and bellows for Jack or Traci. Realizing he’s alone, Billy gets out a hidden gun.

Remember when? On June 27, 2017, on The Young and the Restless, Jill wasn’t thrilled to learn Billy and Phyllis were together, while Colin urged Cane to stick to his story regarding Juliet, who fainted in front of Lily.

Adam & Chloe Bare Their Souls As...

Chelsea Wants Adam to Let Her and...