Adam & Chloe Bare Their Souls As She’s Reunited With Kevin

Thursday June 27, 2019: On Young and the Restless today, Cane has plans for Traci, Adam wants Kevin's dirt on Nick, and Billy and Esther get the shock of their lives. 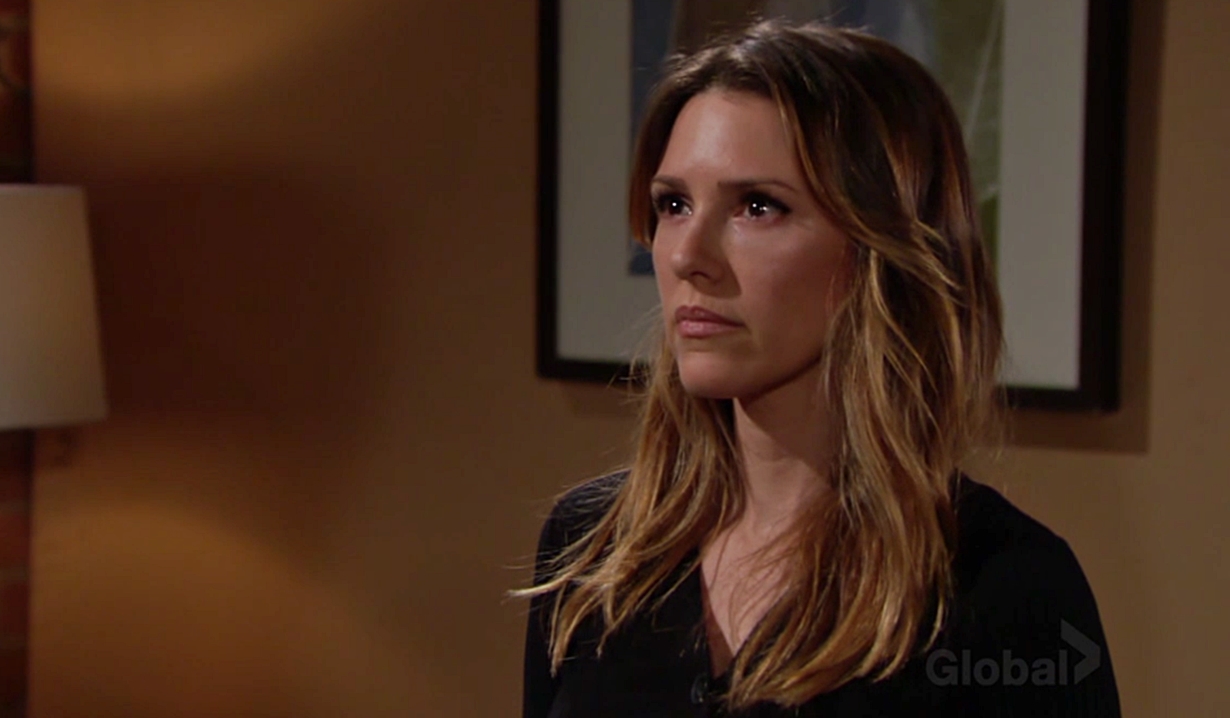 At the Abbott house, after their kiss, Traci stammers that she was so happy to finish her book she must be feeling giddy. Cane thinks it must be contagious. He asks about the next steps for the book. Traci explains the publishing process. Cane decides they need to throw a party to celebrate. Traci isn’t keen but Cane insists. 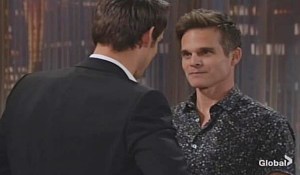 At Adam’s penthouse, he’s sick of Kevin’s stalling – where’s the dirt on Nick? He notices Kevin’s not making eye contact and thinks he found something. Adam reminds him of Chloe and tells him to cough it up. Kevin admits he found something incriminating – he got into some of Victor’s files and there it was; something that could severely damage Nick’s case. He won’t hand it over until Chloe’s freed. They spar verbally until Kevin points out Bella’s the one suffering.

At Society, Jack updates Billy that Phyllis is running Dark Horse. Billy is concerned about her being in deep with Adam and points out Dark Horse is the landlord for all Jaboutiques. Jack considers Adam a friend – he’ll won’t let Phyllis take revenge on Jabot. Billy’s disgusted at Jack calling him a friend. Jack switches gears to Billy and Victoria. Billy reveals Victor made her CEO. Jack’s shocked. Later, Cane arrives, and Billy buys him a beer. They toast to Billy and Victoria before Cane announces Traci just finished her novel. Billy next asks about Cane leaving Chancellor. Cane says it was time to do something more meaningful.

At Crimson Lights, Mariah and Tessa are pleased with the video, but Tessa wonders if the rest of the world will like it. Mariah reassures her. They decide to go get Ana to sign-off on it. Tessa’s dismayed that Mariah doesn’t know what comes next – she’s on a learning curve. Tessa gives her a pep talk.

In a room, Chloe paces. Adam enters with Kevin, who takes Chloe in his arms. Adam exits and Chloe assures Kevin she’s fine and asks about Bella. She apologizes for leaving, but knowing Adam was alive was too much. Kevin warns Bella needs her; she can’t keep going after Adam. Chloe wants to go home. Kevin can’t go back to Portland with her yet and lies he’s helping Michael with a case. Adam returns and Chloe wants to speak to him alone. Kevin argues but is overruled. Once alone, Adam tells Chloe she can stop playing nice – they both know she’d kill him if she could. Chloe admits she’d like to see him beg and be as broken as he made her – she wants him to feel her pain. She complains Bella only gets half a mother because half is consumed with hate for him. Adam is haunted by that horrible night; it plays over and over in his mind. He wishes he’d seen Delia and says covering it up after panicking was his worst decision and a stain on his soul. 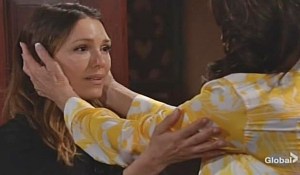 Adam urges Chloe to forget about him and live her life for Bella, not for revenge. After, Kevin rejoins Chloe, who wants a huge favor. Later, Kevin brings Esther to the room. She’s speechless with tears upon seeing Chloe’s alive and holds her. Esther sobs as Chloe explains faking her death and going into hiding. Esther’s dismayed to hear Chloe tried to kill Adam again and has to stay ‘dead’. She wants to go to Portland with her. Chloe will meet her at the airport.

At Devon’s penthouse, Ana tells Tessa and Mariah the video’s amazing – she just needs to tweak the audio. Tessa worries Devon will veto their hard work. Ana thinks his stress caused his reaction and hopes he’ll greenlight it.

Traci’s thinking of her kiss with Cane when Jack arrives at home and realizes she’s distracted but smiling. Traci reveals she’s finished her novel. Jack learns Cane’s planning a party and is thrilled. It’s high time the Abbott family gave her accomplishments the accolades they deserve. Traci takes a call from Cane and Jack looks on with interest as they chat about the book.

Outside Society, Billy gets an unknown text to come to Delia’s grave.

At Crimson Lights, Kevin gets a text from Chloe – she’s saying goodbye to Delia, then going to the airport. Adam appears wanting the information on Nick.

At Delia’s grave, Billy has to sit down from shock when Chloe appears.

Nick and Rey look for dirt on Adam.

Chelsea Stops Adam and Nick From...