Sharon Wants Adam Out of Her Life After Confrontation

Tuesday June 18, 2019: On Young and the Restless today, Mariah puts a plan into action, Jack makes a new friend, and Adam has a proposition for Michael. 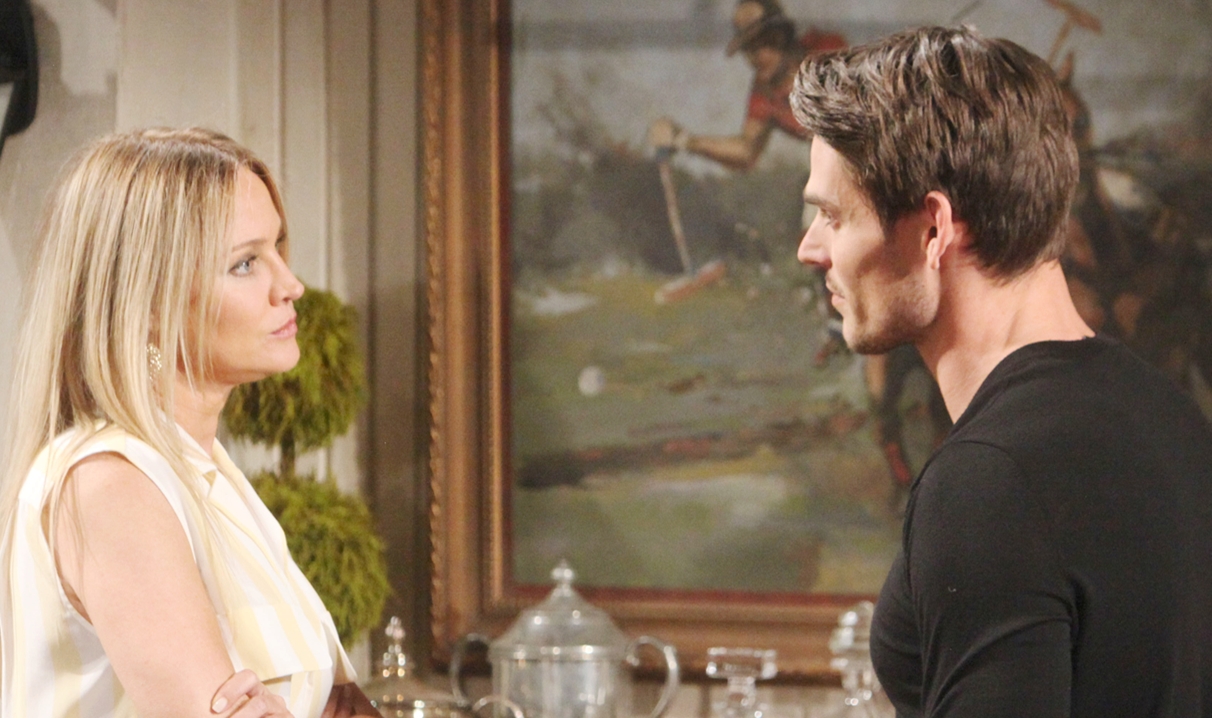 At the Abbott house, Kyle asks Jack to be his best man. Jack couldn’t be happier or prouder to do it. They embrace. Kyle will let him know when they set a date and invites his dad to bring a plus one.

Mariah awakens at home with a ‘eureka’ moment. She urges Tessa to get up and get her guitar; they have to get to work.

At Sharon’s place, she’s stunned when Nick tells her Adam filed for full custody of Christian. She’s so sorry – this is all her fault; she convinced Adam to come home. Sharon asks if there’s anything she can do. Nick advises, “Stay out of the crossfire.”

In Chancellor Park, Jack runs into a woman named Mallory, (played by Wendy Benson Landes), whose father is in Dina’s facility. They commiserate about their parents having Alzheimer’s and Jack decides to join her for coffee.

Summer finds Michael at Society and worries about her mom. Michael assures her Phyllis is indestructible and cares about her a great deal – she’ll be back. Michael gets on the phone with Kevin seeking an update, but Lauren arrives, so he disconnects. She asks what the phone call was about. Michael changes the topic to her trip. Lauren enthuses about their success, and reveals she had a heart-to-heart with Jack, who’s lonely and needs his friends right now. She returns to Michael’s phone call, but he’s saved when Jack appears with Mallory. After they visit with Lauren and Michael, Jack asks Mallory out and she accepts. Inside, Lauren pushes Michael about the phone call. He claims it’s job-related stress.

In his office, Victor calls Adam and leaves a voicemail asking him to come by the office.

At the tackhouse, Adam ignores Victor’s call. Soon, Sharon shows up to confront him about the custody suit – Christian adores Nick, his dad, and doesn’t deserve to be collateral damage. Adam insists he won’t cut Nick out. Sharon shouts that this vindictive game he’s playing has to stop now. 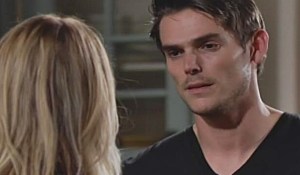 Adam hollers that he has rights. She argues he gave them up when he switched the DNA test and he’s acting like a monster. Adam can’t see how he’s the bad guy. Sharon can’t excuse his destructive streak anymore – she doesn’t like what he’s become. Adam asks if she wants him gone. If he’s going to keep hurting people, she does. She hopes he finds what he wants without leaving a body count. Adam closes his eyes as she storms out. He then calls Michael to be his attorney, but he’s working for Nick and can’t be bought. Adam thinks he’ll warm to the idea but Michael says not even if hell did freeze over.

At Crimson Lights, Mariah tells Tessa that fans need a chance to see the real her. Ana arrives and Mariah relays her idea for allowing people to see and hear the real Tessa and calls Kyle over. 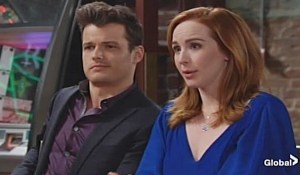 He explains how they marketed Jabot Collective using social media. They discuss strategy and Kyle suggests a crossover with Jabot Collective. It’s agreed upon and Mariah wants it to happen today. On the patio, Nick updates Nikki on Adam suing him for custody and says Victoria’s partly to blame. Nikki doubts she realized Adam would stoop so low. She feels no judge would give Adam custody, but Nick feels Adam always has something up his sleeve. He’s not concerned about his company only Christian.

At Society, Theo tells Summer she needs a distraction. He takes a call from Kyle and advises Summer they have their distraction.

The group with Tessa moves to Chancellor Park to record footage there. Lola arrives with the catering and Kyle joins her. Talk turns to the wedding and Kyle gets labeled Groomzilla for wanting everything to be perfect. As Kyle and Lola kiss, Theo asks if Summer wants to eat. She’s lost her appetite. Tessa makes a speech of thanks and they toast.

At home, Kyle updates Lola that his dad agreed to be his best man and reminds her she said he could go all out. He wants to practice vows, she’d rather practice for the honeymoon, but relents.

On their fire escape, Mariah and Tessa relive their great day. Mariah assures her she deserves every good thing coming to her. Tessa sings a song for Mariah.

Victor Orders Adam off His Property...