Tuesday June 11, 2019: On Young and the Restless today, Sharon gets rattled by Adam, Traci and Jack visit Dina, and Michael's reunited with Kevin. 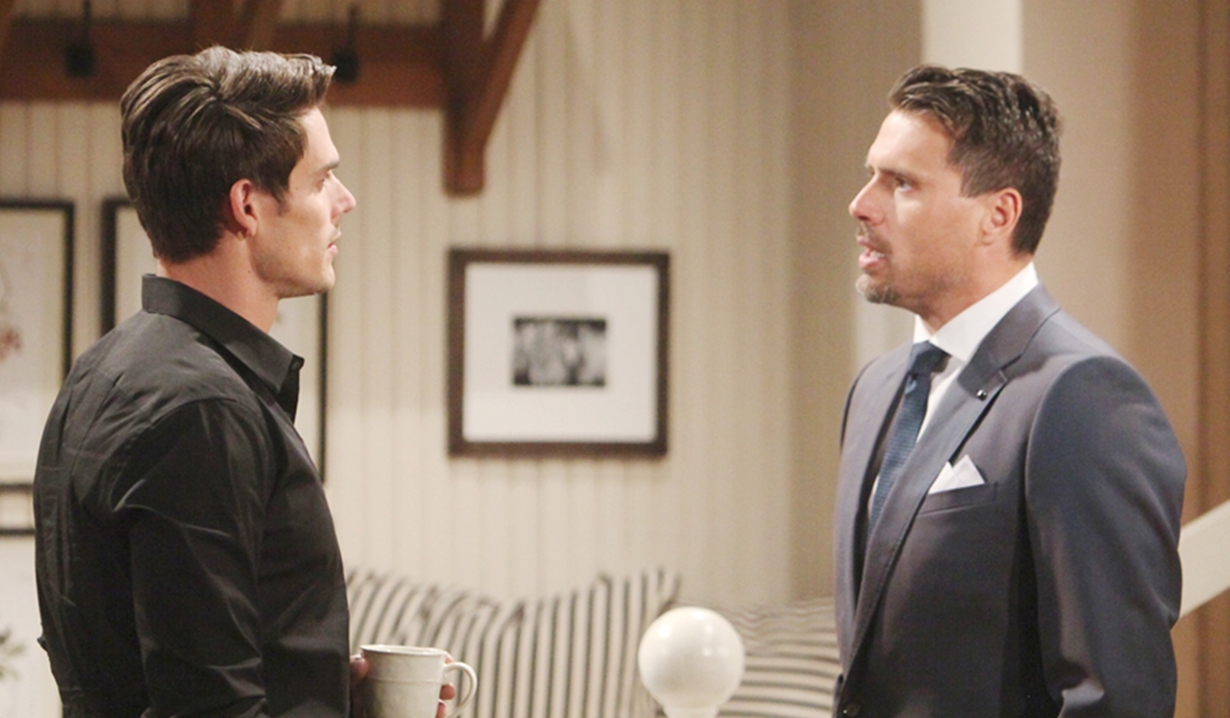 Sharon arrives at the tackhouse to confront Adam about making Nick choose between his son and his company. Adam reminds her Christian is his child and blames Nick for pushing him to extremes. Sharon argues Nick is the only father Christian knows. Adam just wants to be a father to his sons and questions if Sharon’s truly forgiven him. He suggests there are unresolved feelings between them. Sharon reminds him they were over, and he loved Chelsea. Adam shrugs that she’s walked away. Sharon can’t fill that void. Adam asks, “Can you honestly say you feel nothing for me?” Sharon finds that manipulative – they can’t go back. Adam refuses to believe she’s moved on with that glorified security guard. Sharon storms out.

At the facility, Jack and Traci ask how Dina’s getting on. She doesn’t understand why they’re asking – she doesn’t even know them! Dina complains about being lonely since her children left her there. 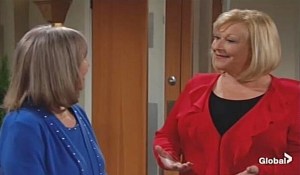 Jack gives her a phone to contact him anytime. Dina thinks he knows what being lonely feels like and purrs someone like him should be married. Traci speaks about finding love. Jack leaves but pauses emotionally outside. Dina thanks Traci for not abandoning her. Traci enjoys spending time with her. Dina learns Traci’s writing a book and giggles when she says it’s turning into a romantic tale. She asks about the special man in Traci’s life, but Tessa arrives to sing.

At Dark Horse, Nick leaves Phyllis a voicemail to get in touch. On the next call, Nick tries unsuccessfully to find a white knight. Rey arrives, and Nick asks him to track down Phyllis. He adds that even if he loses the company, he still wants Rey to watch Adam. Rey agrees; he’s not interested in working for Adam.

Michael and Kevin hug at Crimson Lights. Michael teases about a kidnapping – he assumes Esther has Bella. He’s puzzled when Kevin says Bella’s with her nanny in Portland. Michael asks Kevin to level with him – what kind of trouble is he in this time? Kevin plays innocent but Michael’s not buying it. 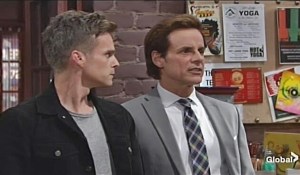 He’s still grilling Kevin when Paul arrives with Lauren, who reveals Phyllis is missing. Paul confirms Summer called him – her things were still at the Club. Michael wonders if she’s lying low. Paul asks Kevin to lend his computer expertise, but he has to rush off. Lauren updates Paul and Michael on Phyllis being angry with her, and her appearance at Billy and Victoria’s ceremony with Adam Newman. Later, Lauren frets about Phyllis but wonders what she was thinking with the knockoffs. She’s stunned Michael wouldn’t put it past her to fake her abduction.

More: Young and Restless blog on dark turn for Phyllis

At Society, Nick and Jack discuss Phyllis going missing and touch on her mistakes. Nick’s suffering due to one of them now and tells Jack he needs a favor. He updates him on Adam buying his loan – he needs $27 million dollars. Jack realizes he’s hoping for a loan from Jabot, but they’re strapped for cash. He suggests Nick talk to Adam. Nick can’t trust him.

Victor’s surprised to see Nick come to his office. Nick needs his help or he’s going to lose Dark Horse – he owes him for bringing Adam back into their lives. Victor learns of Adam using the company to force Nick to hand over Christian and thinks he was desperate. He recalls Nick’s transgressions against Newman, and Nick reminds him he tried to steal his son too. Does he want him to grovel? Victor won’t give him money, but he’ll leave the door open for him to rejoin Newman Enterprises. Nick accuses him of only caring about winning. Victor counters that Nick’s testing him. Nick says coming was a mistake and goes.

Sharon slams into the house and Rey notices her irritable mood. He asks if everything’s okay and she kisses him and pulls him upstairs to the bedroom while undressing. They make love. Afterward, Sharon dozes and Rey looks at her curiously. Later, Rey asks her if their ‘escape sex’ worked – did she forget about Adam? Sharon admits she saw him. Rey believes he’s getting inside her head.

At the tackhouse, Adam takes a call from Kevin, but Paul arrives about Phyllis, so he disconnects. Paul learns Adam’s planning to move to the Athletic Club and asks him about being seen with Phyllis. Adam relays they had a minor fender-bender. Paul finds her lipstick. Adam admits she was there and asks Paul to let him know if he finds her. After, Nick arrives with the keys to Dark Horse and warns if Adam goes near Christian he’ll tear him apart.

Jack returns to the facility while Tessa’s singing and tells Traci being there is more important than his meeting.