Wednesday May 15, 2019: On Young and the Restless today, Rey demands a paternity test, Phyllis confronts Summer, and Traci has an intense moment involving Cane. 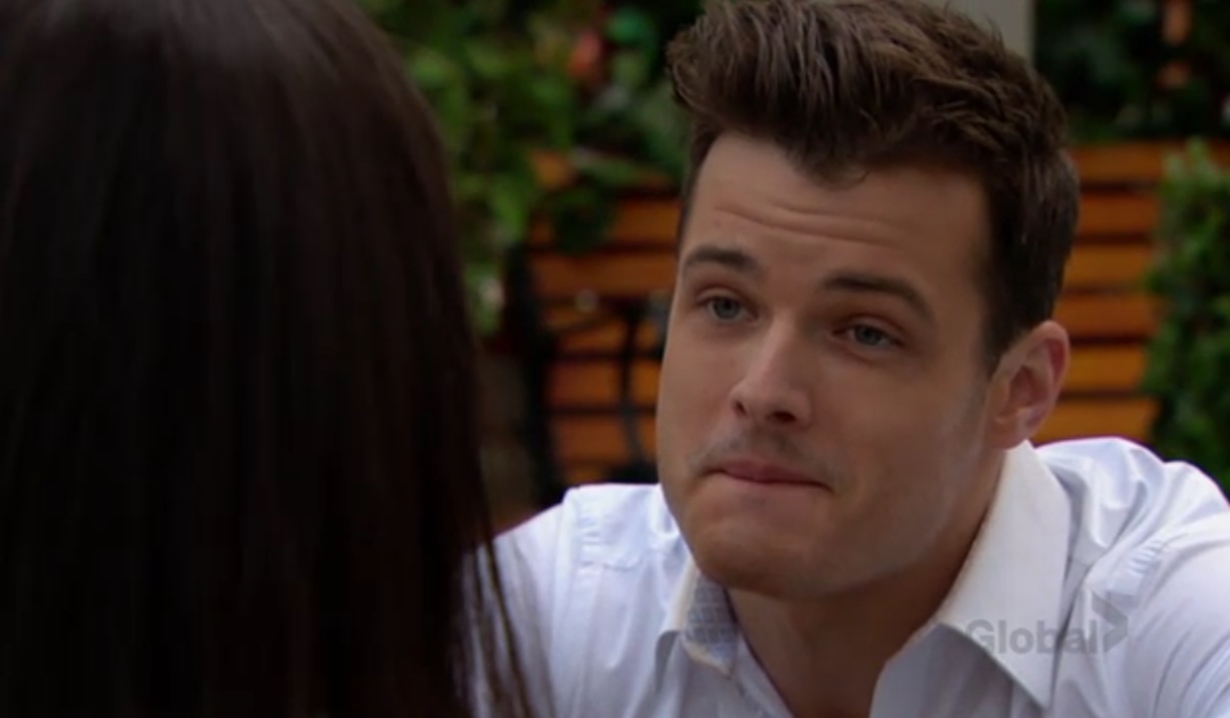 At Society, Traci tells Lauren she’s working on a book. Lauren notes her glow – she looks like she’s in love. Talk turns to Jack. Lauren thinks he should put himself out there or he’ll end up alone. 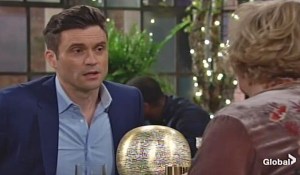 She realizes she may have offended Traci, who assures her she’s happy on her own. Cane arrives, and Lauren joins Michael when he enters. Michael balks at Lauren’s idea to play cupid and help Jack find the perfect woman. Across the room, Cane updates Traci that he received a handwritten letter from Lily. Traci warns him not to read too much into it.

At Jabot, Jack informs Phyllis he knows she accessed the company’s servers. Phyllis snarls at him. Jack says she was right, the one thing missing from Jabot’s collective is accessories. He chortles, “Congratulations, you’ve got yourself some competition.” Phyllis warns he’ll regret this and snaps a photo of his collective logo on her way out.

At the hospital, Rey and Arturo learn Mia was having Braxton-Hicks contractions and is free to go. Rey accuses her of faking the whole thing so Paul wouldn’t arrest her. Bickering ensues and Rey 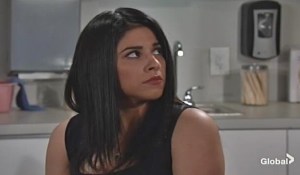 realizes the two of them are together. His disbelief gives way to demanding a paternity test now that Mia’s far enough along. Mia wonders if he’ll continue to protect her. Rey explains it’s in Paul’s hands now. They take cheeks swabs – the results will take 24 hours. Arturo says either way, the kid will have a great father and an uncle who loves him.

In the park, Kyle lets Lola know he’s dead serious about living together – he’s ready to go to the next level. He lays out the pros, then the cons – there are none. Lola says nothing would make her happier than coming home and spending every single night in his arms. “Let’s do it.” All’s well until Lola realizes he expects them to move into the Abbott estate – she’d like to have their own place. Kyle likes the idea but balks at taking over Arturo’s apartment. Ultimately, he doesn’t care where they live as long as they’re together.

Nick finds Summer sulking on the couch over Kyle. They agree love is dumb. Nick’s surprised she wants to stay at Jabot. Summer loves her job and is good at it. Nick breaks the news that Grandpa brought Uncle Adam back from the dead. Summer wonders what will happen with Christian and feels Adam must know Nick’s a great dad. 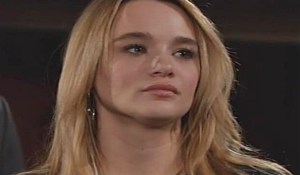 Suddenly, Phyllis pounds on the door and confronts Summer for turning on her. Nick learns of Phyllis’ hacking and calls his ex ‘low’. Phyllis reminds him he started Dark Horse by accessing Newman’s files. Summer announces Adam’s alive and walks out. Nick confirms he saw his brother, then advises Phyllis to fix her life without using everybody as stepping stones. Once alone, Nick looks at Christian’s photo.

At Jabot, Jack admires Summer’s hard work. She doesn’t think she and Kyle are the right team to move the collective forward and complains Kyle bailed on the clubs and left her to network alone. When Jack asks, Summer assures him this isn’t about their personal situation. Jack will speak to Kyle. After, Summer calls Theo to come back to Genoa City. Later, Jack opens an invitation to Ashley’s huge launch event in Paris. He tosses it, then chuckles.

At the Abbott house, Traci resumes writing her novel, with her cast as Flynn’s secretary advising him that the woman he’s pursuing will bring only more heartache. Cane arrives with an idea – he suggests instead of infidelity, she have the ex hire the private eye to find something, like a locket. Traci muses it could be the symbol of a broken heart – she loves it. Suddenly, Traci pictures Cane shirtless and becomes flustered. She assures him she just got a little excited…about his idea!

Michael meets Phyllis at Crimson Lights. She asks how you create an anonymous shell company. Michael wants to know what’s going on. Phyllis fills him in on her issues with Jack and her plan to go around him by making Jabot collective accessories without the Abbott price tag. Michael warns she can’t peddle counterfeit goods and urges her to be original; she’s more than capable. Phyllis informs him Adam’s alive. Michael says, “Unbelievable.”

Nick Puts Adam on Notice When They...