Lola Learns Mia Attacked Her and Is Planning to Leave Town

Thursday May 9, 2019: On Young and the Restless today, Abby wants to call the cops, Summer maneuvers to get more time with Kyle, and Lauren disagrees with Jack. 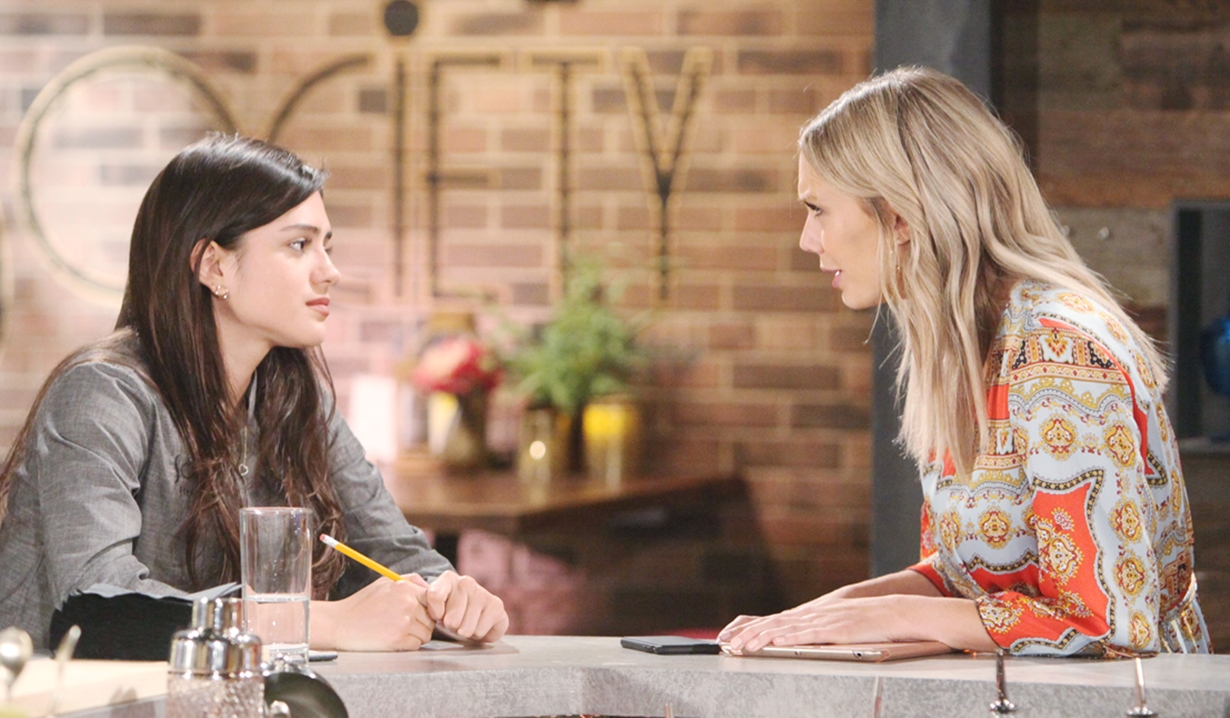 At Jabot, Jack updates Lauren that Summer and Kyle are meeting with a social media influencer in New York. Talk turns to Phyllis’ new venture. Jack says he turned down a partnership, but Lauren accuses him of letting his personal feelings get in the way of business decisions. Jack agrees to reconsider but will make no promises. Talk turns to Dina. Jack laments that she now has to wear a GPS bracelet. Lauren’s sorry.

In New York, Summer and Kyle tell Theo, (played by Tyler Johnson), the social media influencer about their ‘sick’ marketing strategy. Theo shares some ideas then comments on their killer chemistry. He invites them to a Club, but Kyle insists on returning to Genoa City. After Theo leaves, Summer snaps at Kyle for turning down his offer.

In Chancellor Park, Tessa asks Mariah why she didn’t want to scare off her stalker. Mariah avoids answering when Ana appears. 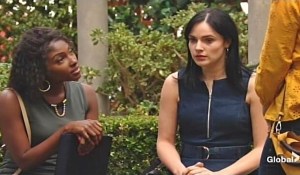 Ana’s not keen on Mariah joining the meeting about Tessa’s new look, so Mariah moves away. When Ana suggests red hair, Mariah mutters. Ana next proposes Tessa show a little skin and Mariah balks. Ana asks, “What is your problem?” Mariah feels Ana doesn’t get Tessa. Ana is trying to create a brand and discounts Mariah’s suggestion that Tessa promote Kyle’s collective. After, Tessa’s angry with Mariah.

Arturo appears in Society’s kitchen to update a dismayed Lola that he and Mia are returning to Miami. They bicker about Rey, and Arturo blurts if Mia’s baby’s not his, he’ll send her to jail. Lola quickly guesses it was Mia who attacked her. In the dining area, Devon and Abby discuss his ideas for honoring Neil. She asks how he’s doing. Devon admits opening night was the first time he’d felt alive since Hilary, then Neil died. In the kitchen, Arturo denies Mia hurt Lola, but Lola recalls wearing Abby’s coat and figures it out. Abby appears at the sound of shouting. Lola runs out.

At Crimson Lights, Tessa explains to Mariah that her constructive advice can be annoying. Mariah admits she’s afraid if Tessa becomes a star there won’t be anything left for her. 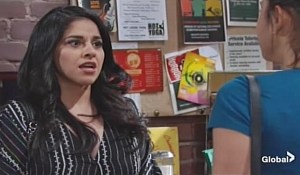 Tessa assures her what they have is forever. On the patio, Lola corners Mia and hollers that she attacked her, believing she was Abby. Mia’s jaw drops. Abby appears and says, “I don’t hear a denial.” Abby recalls Mia got in her face that night at the Club. Mia calls Abby a stupid, entitled bitch and swears to Lola she had no idea it was her, or that she fell in the pool. Abby’s calling the police. Mia tells Lola to stop her.

At the penthouse, Ana tells Devon that Mariah needs to learn to keep her mouth shut. Devon smirks, “Good luck with that.” He says there’s always a reason someone has their armor on. Ana thinks that’s smart. She then tells Devon that Michael Baldwin has been trying to reach him to discuss Neil’s will. Devon knows he can’t put it off forever and promises to call Lily. Ana reminds him they’re all there for him. She invites him to Tessa’s session, but he declines. Once alone, he looks at the notes on Neil’s jazz albums. He dozes until Elena arrives. Devon apologizes for kissing her. She isn’t mad, but worries it happened because he felt sorry for her. Devon admits he was dreaming, and it was an impulse. She agrees to let him take her to dinner.

Kyle and Summer update Jack on their trip to New York at Jabot. Jack’s pleased and urges them to delve into Theo’s client list. After Jack’s gone, Kyle moves for the door, but Summer thinks he should put his job before Lola. Kyle advises her to enjoy the rest of her day. Later, Summer gets a call from Theo, who is flying in tonight with a client to help them. Summer disconnects and smiles before finding Jack and complaining that Theo’s on the way and Kyle’s gone. Jack orders her to find him and advise this should be his top priority. In the elevator, Summer looks pleased.

At Chancellor Park, Mia accuses Arturo of ratting her out – Lola and Abby know. Arturo worries; Rey will lose his mind. She’s sure Little Miss Scrawny will take this chance to get back at her for sleeping with him – he has to stop her. Arturo explains only Lola can press charges, and she’ll listen to him.

At Society, Lola asks Abby not to report Mia – she wouldn’t hurt her on purpose – and if she hadn’t gotten hurt, they wouldn’t have found her liver problem in time. Lola can’t allow her niece or nephew to be born behind bars. Abby learns Arturo and Mia are leaving and agrees. After, Kyle arrives and senses something’s wrong – whatever it is they’ll get through it together.

Mia is confronted by Paul.

Devon Kisses a Stunned Elena While...

Mia Suffers a Medical Crisis After...