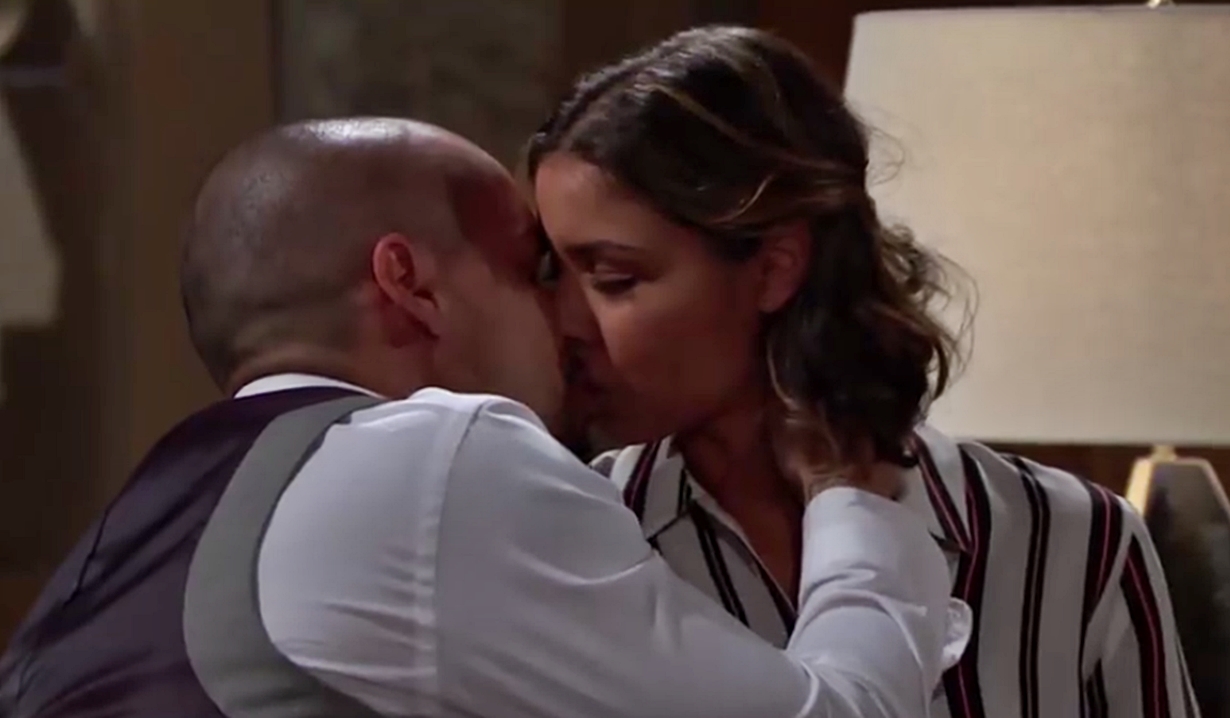 In the park, Sharon texts Adam, “I’m here.” She hears his phone ding in the bushes, walks over, and asks, “Adam?” She texts again but he’s gone.

Sharon returns to her Vegas hotel room and updates Rey that she didn’t see Adam, but he was there – she can always sense his presence. Rey asks about their history. Sharon tells him they were in love and their connection drew them back to one another time and again – it was undeniable. She talks more about Adam’s complicated nature and how he saved lives, including hers. Sharon recalls when she burned the ranch down while mentally unstable and Adam saved her from the fire and got her into therapy – she was diagnosed as bi-polar. Rey’s supportive and Sharon’s relieved. 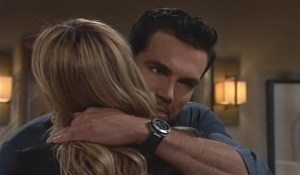 They embrace, then discuss Nick’s concerns that Adam might get into her head. Sharon won’t leave Vegas; Adam helped make her the woman she is…she must return the favor. Rey’s concerned, but Sharon reassures him – she’s stronger now and Adam won’t affect what they have – she got off that rollercoaster a long time ago. Sharon and Rey start kissing and have sex. After, Sharon throws a robe on and checks the hallway. Rey asks, “What is it?” She says nothing and returns to bed but looks freaked out.

At Crimson Lights, Cane and Devon chat. Cane reveals he has a meeting that may start a whole new him. Devon listens as Cane meets with a woman from a non-profit and suggests he could help prisoners looking for a second chance. After, Devon confronts Cane and warns if he’s doing this for Lily it’s a mistake – she’s going through with the divorce. Cane insists he’s merely trying to rebuild himself, but wishes he could see Lily and comfort her. Devon says she doesn’t want him there. Cane wants a job that’s worthy of her and will also sell the house. Devon warns against overhauling his life for Lily. On the patio, Mariah gets another text from her stalker who warns he’s not going away and knows how to find her.

In the Abbott living room, Traci writes about her fictitious 1940s character based on Cane, who answers a knock on the door to the character based on Lily. Traci types, “Heartbreak was back.” Traci describes Flynn’s pain over his break-up with Iris, who now needs the private eye’s help with a case. 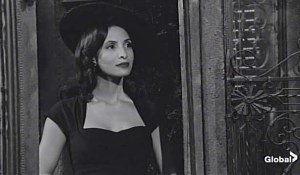 Iris reveals her new husband is cheating on her – she wants Flynn to prove it. Flynn thinks she’s still in love with him. He kisses Iris, who slaps him. Just then, Traci takes a call from Cane, who wants to see her. When he arrives, he tells Traci she’s the only one who feels he shouldn’t give up on Lily. Traci hopes she hasn’t fostered unrealistic expectations. Cane asks how Traci’s doing. Traci says no one’s asked her that in a very long time and talks about tending to Dina – it’s heartbreaking, but also a gift. They reflect on Neil’s passing tamping down Jack and Ashley’s rivalry – Traci was frustrated with it. They agree they enjoy talking, and Traci reveals he inspired her to start a new book – the protagonist is loosely based on him and is her hero. Cane lets her get back to work, and she assures him he’ll be okay even if things don’t work out how he wants.

At the penthouse, Jett joins Ana and Tessa. Over martinis, Jett advises, “Never hide your voice.” He sits at the piano to sing and Ana and Tessa join in. Devon enters and says they’ve given him a great idea. He says Neil believed music was healing, so they’ll do a show to honor him at Society and dedicate the space to him. Later, Elena admires how Devon’s handling Neil’s death and blames herself for her mother’s death – she was epileptic and was responsible for her taking her pills. 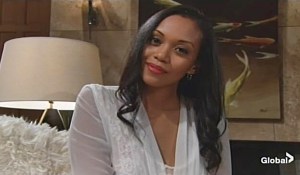 Her crazy hours meant she wasn’t there when she took a seizure, fell, and died. Devon thinks she can choose to let it go. Elena goes upstairs. Devon lays down and is dreaming about Hilary when Elena returns and wakes him. He ‘sees’ Hilary and plants a kiss on Elena. Devon apologizes – he doesn’t know why he did that. Elena’s speechless.

More: Elizabeth Hendrickson back to Y&R as Chloe?

Tessa startles Mariah at the coffee house. Mariah admits she got another text. Tessa’s outraged and sends the stalker a message asking him to help her understand what she did to upset him – if they talk, maybe they can work it out. Talk turns to Tessa’s successful recording session. Mariah screams enthusiastically and is hugging Tessa when another text comes in – it’s not the stalker. Tessa thinks her text scared him off. Mariah doesn’t want to do that – Tessa will see why.

Arturo Has Sex With Mia After...

Lola Learns Mia Attacked Her and Is...