Tuesday April 30, 2019: On Young and the Restless today, Nikki wants to know what Victor's got himself involved in, Summer wants to stay on at Jabot, and Billy confirms a deal with Phyllis. 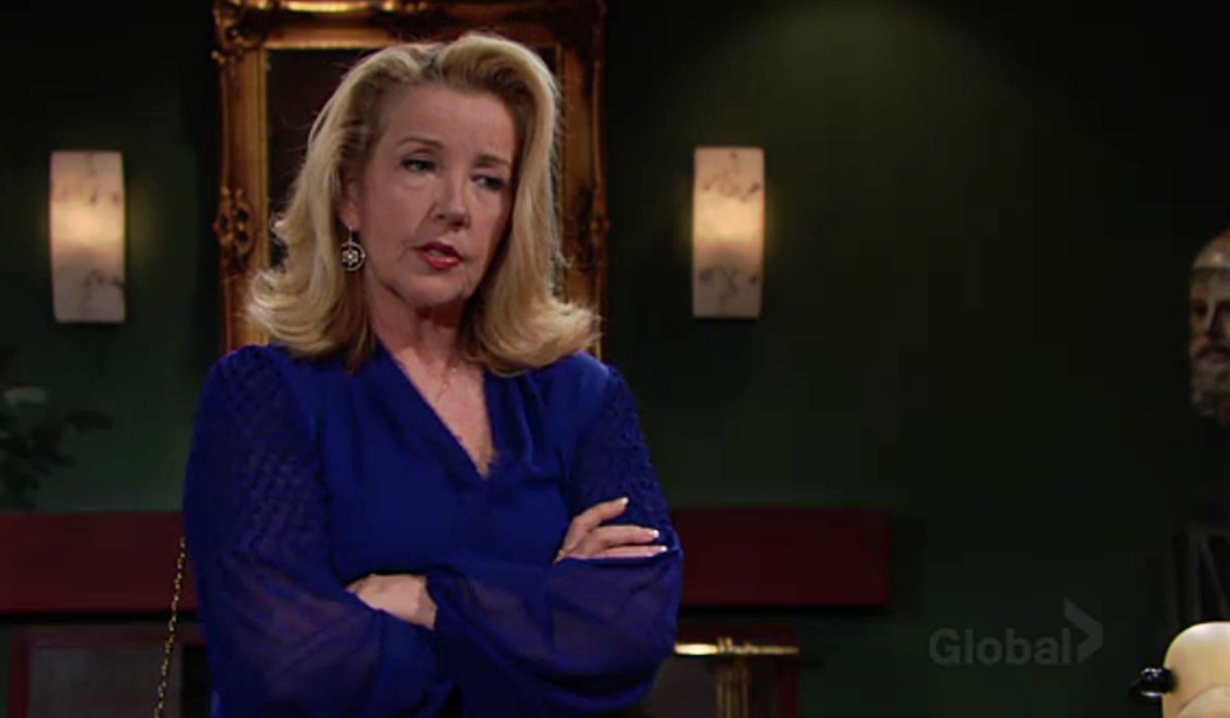 Victoria arrives at Newman Enterprises and Nikki, looking through paperwork, tells her Victor went back to Vegas. She complains he was cryptic, and says she’s determined to find out what he’s up to.

At home, Sharon tells Rey she can’t stop thinking about Devon and Lily’s loss. Rey gets a text from Nikki, who wants him to track down Victor. He needs a paycheck, and Sharon thinks this could be a good thing.

At the Abbott house, Summer remarks on Kyle hiding out in the pool house. He wonders if she’s thought of where to live. She complains about him tossing her out like spare parts. Kyle thinks she should be proud of saving Lola’s life. 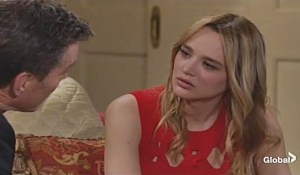 She did it for him and rants that Lola doesn’t know him like she does. Jack enters as Kyle reiterates that it’s over. Summer goes upstairs and Jack tells Kyle to go; he’ll make sure Summer’s okay. When Summer reappears Jack clucks about this being a difficult situation. He suggests she go back to Newman – the timing’s off for Jabot.

Billy arrives at Jabot to find Phyllis waiting to confront him about backing out of their deal. 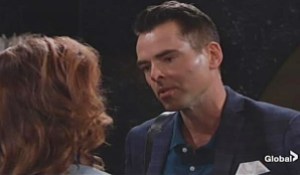 Billy assures her she’ll get her money as Summer calls Phyllis wanting to meet. After, Billy reiterates Phyllis will get the money, but this is the end of the guilt about Summer, and of them. Later, Jack arrives and talks with Lauren about Neil’s death. Talk turns to business, and they agree to meet later.

At Society, Kyle informs Lola that Summer know he kissed her and gave her the necklace. 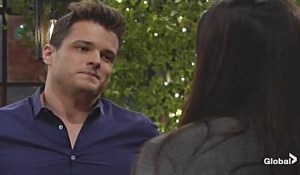 Lola assumes he’s there to end things, but he reveals he told Summer he wanted a divorce. Kyle holds Lola, who asks how Summer reacted. He says she’s moving out and nothing will stop them from being together. They kiss and he plans to surprise her later.

At Newman, Rey learns Nikki wants to hire him because he’s relentless in pursuit of the truth. He takes the case. Later, Victoria and Nikki discuss Billy. Victoria reveals he proposed, but she’s leery. Nikki asks if she loves him. Victoria replies, “Very much.” Nikki questions why she’s putting her happiness on hold.

In Phyllis’ suite, Summer tells her mother Kyle’s leaving her for Lola. Phyllis wants her to find someone who appreciates her. Summer thinks she should fight – isn’t that what Phyllis would do? Phyllis fought like hell, but the relationships still ended. Summer explains her disappointment about not working at Jabot. Phyllis advises her to tell Jack she wants to stay.

At Sharon’s, Rey explains he’ll have to take off for Vegas. Sharon’s chirps that she’s going there too; they should stay together. Rey’s wary, but Sharon knows how Victor operates. Rey teases she’ll be his sidekick and they kiss.

Summer runs into Lola at Chancellor Park – she doesn’t blame her for what’s happened. Lola says Kyle feels really bad and they’ll always be grateful for Summer saving her life. Summer admits she’s not sure she’d do it all over again.

At Crimson Lights, Lauren can’t figure out why Billy’s backing Phyllis’ new venture. Phyllis says, “Good karma,” and explains she’s starting an accessories business. Lauren wants details, but Phyllis doesn’t want to jinx it. Mia appears and Lauren leaves. Phyllis admires Mia’s knock-off sunglasses and asks Mia to help with her venture. Mia agrees to make a list of where she buys accessories. Later, Sharon arrives. Mia reveals she’s starting a new job and would like them all to be on good terms. Sharon thinks she wants to stay on good terms so Rey won’t turn her in for attacking Lola. Mia’s stunned he told her. Sharon says they don’t keep secrets and he wanted her to know what she’s capable of – she warns Mia to stay out of her way.

At Society, Billy brings up Phyllis’ business pitch. Victoria guesses he gave her the money and asks if he wants to stay connected to her. Billy denies it – it’s a generous parting gift. Victoria observes people like Phyllis need a win to get past the hurt. Billy’s pleased she trusts him. In the kitchen, Lola finds a rose and a note that Kyle can’t wait for tonight. On the rooftop, Kyle plans a beach set up with a bar and sound system. Outside the restaurant, Billy and Victoria discuss putting off work and kiss.

Summer finds Jack at Jabot and asks to keep her job – it’s tailormade for her skillset. Jack’s wary about her working with Kyle. Summer reassures him and he agrees to think about it.

At Newman Enterprises, on the laptop, Nikki reads an article about the FBI investigating the ‘Queen of Las Vegas’ and wonders what on earth Victor’s mixed up in.

Young and Restless Actors Past and...