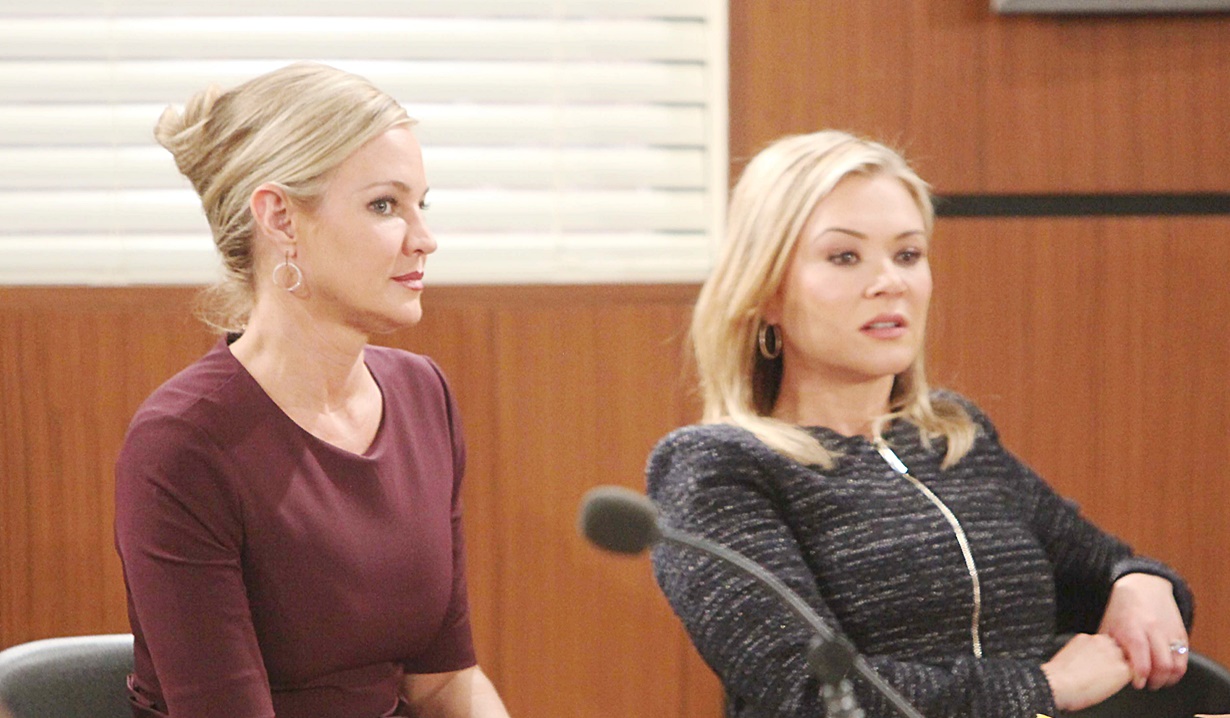 At the courthouse, Mia’s intent on staying and supporting Rey. They enter the courtroom, where Nikki wonders why Brittany would want Rosales to testify. Once court’s in session, Brittany calls Rey to the stand. She asks how he came to arrest Phyllis, Victoria and Sharon. Rey responds, “Sharon confessed to me.” Brittany forces him to reveal the confession took place at Sharon’s house. She brings out that the married man was there on personal business on Valentine’s Day. Rey explains what he noticed on Sharon’s phone bill. Brittany asks if Rey told Sharon he was in love with her. Rey tries to avoid answering. Brittany reminds him he’s under oath. Rey admits he told Sharon he loved her. Mia grimaces angrily. Brittany suggests Rey’s credibility took a hit when his case against Victor fell apart. 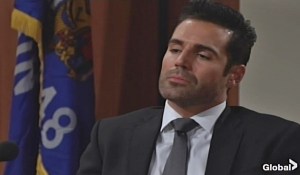 He admits he and Christine spoke about the need for evidence. Brittany accuses him of declaring his love for Sharon as a means of coercing a confession. Rey denies it. Brittany observes he must be in love with Sharon then – he can’t have it both ways. Rey says he’s a happily married man. Brittany feels her allegation that Rey coerced Sharon is correct and lays out how he insinuated himself into her life over time. Brittany paints Sharon as a sweet person who was in the wrong place at the wrong time. Christine cross-examines Rey, who claims Sharon confessed but was not under duress. He admits she said she loved him too, but denies tricking her. He claims he wasn’t there to arrest her so there was no need for him to read her rights. Chris extracts that Phyllis later corroborated Sharon’s confession. Michael declines to question Rey. Mia angrily confronts her husband during recess, but Christine orders him to the station.

In the interrogation room, Rey denies playing on Sharon’s feelings to get a confession or breaking departmental rules. Christine rants about the bad optics from his testimony. Rey apologizes and offers his resignation.

In the courtroom, Nikki and Victoria confront Sharon about spilling to Rey. Sharon wonders if Brittany’s right and he’s been playing her the entire time. Michael pulls Victoria and Nikki aside – he’s changing their strategy. He believes the jury needs to hear the whole truth and will put Victoria on the stand. Michael says, “I’m putting domestic violence on trial.”

At the Club, Kyle and Summer recap their deal. He’s grateful for what she’s doing for Lola. Summer starts talking wedding plans, but Kyle has things to take care of. He kisses her and goes. After, Phyllis arrives, and is stunned when Summer announces she’s engaged. Phyllis is taken aback to hear Kyle proposed – they’ve barely been speaking and he’s dating Lola. Summer tells Phyllis she’s out of the loop but her mother questions the rush and asks if she’s pregnant. Summer exclaims they love each other – what other reason does Phyllis need?

At the Abbott house, Kerry’s pleased to see Jack has wine and goodies. She questions the occasion. Jack hopes today’s the start of an exciting new chapter in their relationship. 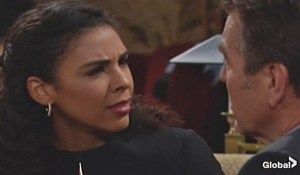 Kerry talks about Phyllis asking her to come up with a signature product to signal a new era. Jack muses Phyllis wants to change the narrative and senses she’s floundering – he wonders if it’s time to worry. They debate. Jack asks Kerry to keep him informed. Kerry’s offended he’s asking her to betray her boss and friend. Jack won’t apologize – together they can chart a new course. Kerry muses she didn’t say she wouldn’t do it but there would have to be something in it for her – she’ll need an offer in writing.

At the hospital, Kyle takes Lola’s hand and updates her that a donor’s been found – he wishes it had been him – but everything will be okay; she’ll get well and live a full life making her dreams come true. Kyle says the only thing that matters to him is that she’s alright – for the first time he understands love and putting someone else’s happiness ahead of his own. Nate appears and Kyle relays that Summer’s agreed to be the donor anonymously.

Kyle returns to the Club to discuss the surgery with Summer. 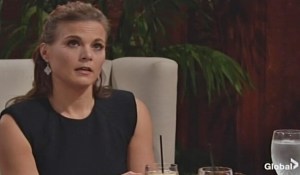 Phyllis wants to hear about the engagement…from him. Kyle explains he and Lola wanted different things – he’s a better match with Summer. Kyle asks for her blessing and Phyllis says she’s happy if Summer’s happy. Summer exits and Phyllis warns Kyle that Summer’s more vulnerable than she lets on – if he reneges, she’ll be devastated.

At home, Mia opens a beer and takes a drink, then stops and touches her tummy. Rey arrives and Mia claims she was so upset she nearly drank. She confronts him – everyone knows her husband is in love with another woman.