Wednesday March 6, 2019: On Young and the Restless today, Kyle proposes to Summer, Phyllis and Kerry look to the future, and Tessa realizes she was duped. 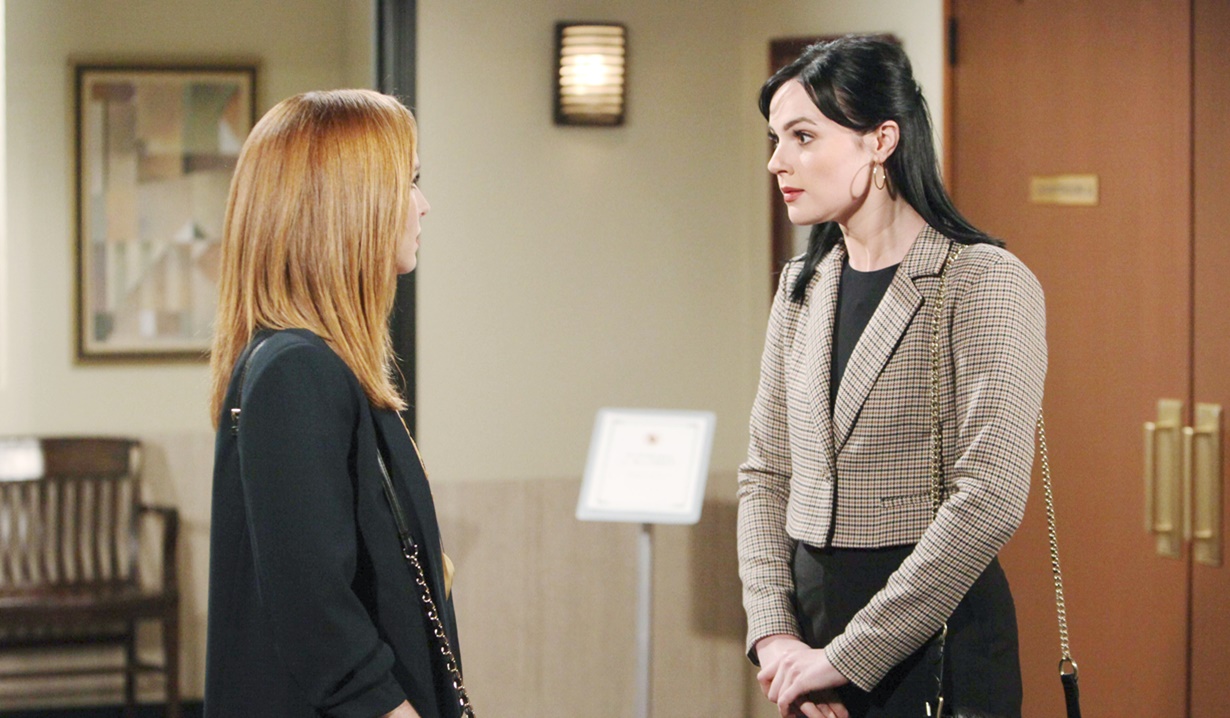 At the Club, Summer marvels at Kyle’s rather extreme offer of marriage. Kyle will do whatever it takes to save Lola’s life and tells Summer, “You win.” She’ll be giving him what he needs, and he’ll be giving her what she wants. Summer realizes he’d see it as a transaction and rants that he always underestimates her – she isn’t the kind of person to blackmail him into a loveless marriage. Summer decides she won’t be Lola’s donor. Kyle stops her from leaving. Summer wants him to admit his relationship wasn’t perfect. They argue whether Lola’s the right girl for him. Summer insists he be honest. Kyle concedes he kissed Summer back at the cabin. Pleased, Summer decides they can move forward together now…after the surgery. She can live with him thinking he’s in love with Lola – she knows she can make him happy. Summer’s certain he’ll soon realize he was miserable before. 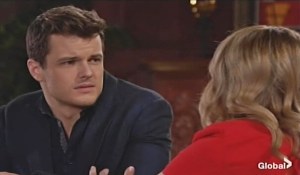 Kyle’s willing to give them a try. She proposes they stay married for a year, then divorce if they’re not blissfully happy. Kyle, exhaling, agrees, but warns he’ll perform no husbandly duties. Summer stipulates no one can know she’s Lola’s donor so people see them as two people who found each other again. Kyle insists he be the one to tell Lola. He’s anxious to get to the hospital and arrange for surgery, but Summer makes him get down on one knee to propose. The patrons applaud as she enthusiastically accepts.

In the courtroom, Michael calls Tessa to the stand and questions her about the video. He asks if it’s true she used it to blackmail his clients. Tessa doesn’t respond. Michael introduces banking evidence 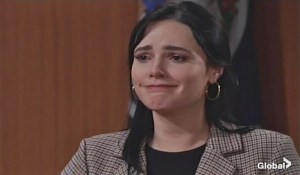 and Tessa tearfully comes clean. Michael booms if anyone deserves to face criminal charges, it’s Miss Tessa Porter. Mariah looks distraught. Michael forces Tessa to admit she had no proof a crime had been committed and brings up her history of stealing. He suggests Tessa was responsible for JT’s death or may have been in cahoots with JT. Christine asks for a recess. As Michael whispers to Nick, Nikki, and Victoria about creating reasonable doubt, Tessa tells Mariah she fears the worst is yet to come.

At Jabot, Kerry joins Phyllis, who wants to talk and notes Kerry’s the only one she can count on right now. She fills her in on Christine twisting her words and Nick refusing to believe she was trying to help – she doesn’t want the women in jail. Kerry’s sympathetic and warns Jack’s concerned about perceptions surrounding Jabot. Phyllis has a plan, but wonders if Kerry’s relationship will be a problem for them. Christine appears, so Kerry exits. Phyllis complains about Chris twisting her words and the D.A. gloats she outsmarted her. She asks what Phyllis knows about Tessa Porter. Phyllis is happy to oblige. Later, Kerry rejoins Phyllis, who wants her to help transform this place with a new line of products. Kerry suggests instead of the ‘Phyllis era’ it will be the ‘Phyllis and Kerry era’. Phyllis agrees to ‘Phyllis and Kerry’ and they shake on it.

Back in court, Christine cross-examines Tessa and gets her to describe how Victoria broke into her apartment and threatened to frame her for JT’s murder. Chris extracts that Victoria had a hidden camera in Tessa’s apartment and suggests the video must have been very important. Next, Christine tries to get Tessa to tell about the incident in the car in the woods, but Tessa won’t cooperate. When Chris muses that maybe Tessa did kill JT, 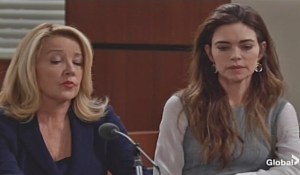 Tessa blurts that they kidnapped her with a bag over her head, forced her into a car, and left her in the cold woods. Chris has Tessa identify her kidnappers in the courtroom then dramatically says, “No more questions.” Outside, Nick tells Tessa she got what she deserved. Tessa hollers she didn’t want to say anything – it wasn’t her who told Christine about the kidnapping. Inside, Michael complains to Nikki and Victoria about the position they’re in. Brittany announces she’s calling Rey Rosales to the stand – after that, everyone will forget about Tessa.

At the coffee house, Mariah is reassuring Tessa when Phyllis appears. She lets them know Christine came to see her and she told her about Tessa blackmailing the women. When Phyllis says she didn’t mention the kidnapping because she wanted to help the others, Tessa realizes she gave up the rest on the stand – Christine tricked her. Phyllis says that sounds right – you think you’re helping the defense but really, you’re helping Christine bury them. Phyllis gives Tessa her coffee, and says, “You’re going to need this more than me.”

Kyle Offers to Marry Summer If...

Rey & Sharon's Love Is Revealed in...