Billy & Victoria Panic As They Hear Katie Singing in the Walls

Friday February 1, 2019: Mia opens up to Arturo, Phyllis warns Billy that Summer's back, and Lola and Kyle have a talk. 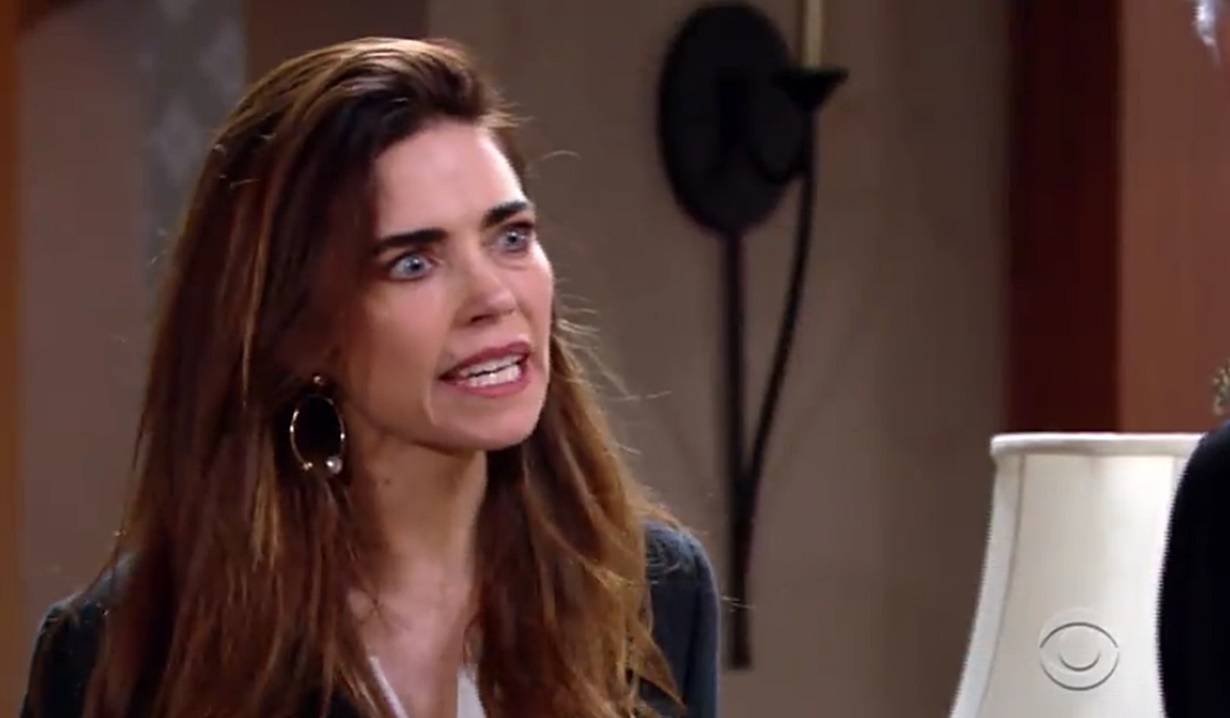 At the ranch, Nikki frantically searches for Katie. Victor appears and she fills him in. Victor calls security. Soon, Victoria arrives, and Nikki warns someone might be in the house. Victoria panics, “Has Katie been kidnapped?” She hollers for the child to come out as Victor explains Nick is on his way and he hasn’t called police. When Nick arrives, they’re still searching. Nikki explains she has a feeling someone’s on the property and shows him the security footage. Victoria and Victor rejoin them and have come up empty. Victor feels it’s someone who knows how to avoid the cameras.

Mia arrives at Crimson Lights and intercepts Arturo, who’s upset about the engagement dinner. Mia apologized to Abby, but he doesn’t believe it was sincere. They sit. Mia admits she was jealous of the proposal and the ring, but not because she wants him…she likes to be the center of attention. 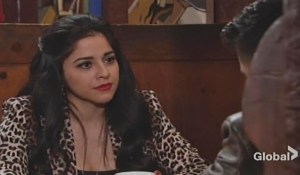 She concedes it hurt watching him tell someone else she’s the love of his life, especially when he said he’d never marry. Arturo wants to believe Mia wants them all to be family, but it’s difficult. Mia needs confirmation they’ll have a connection; will be friends. Arturo reassures her. Mia exits and looks back wistfully. After, outside, Arturo runs into Rey, who invites him upstairs. Over beer, Rey cautions Arturo that Abby’s from two brand name families. Arturo tells him about Victor’s pre-nup and they laugh. Rey worries about Victor’s trial and asks if he’s ready for a lifetime of Newman drama. Arturo reassures him. They joke about being adults as Arturo leaves.

At the Abbott house, Kyle tells Lola to close her eyes, puts on music, and surprises her with a spread of sushi and sake. She finds the set up weird and asks if he’s trying to convince her they’re good, or convince himself that Summer can’t get to him. Kyle shrugs – he doesn’t know how to show Lola how he feels; it was just takeout. He then admits Summer’s a wrecking ball and he’d build a moat around them if he could. Lola notes they don’t have sex; most couples do. She blurts that Summer wants him and she can give him what she can’t. Kyle wants Lola, but she thinks he’s way more frustrated than he wants to admit. Kyle assures her he can go at her speed – he loves her. They hug, but he looks tense. After, they cuddle. Lola’s glad they talked. Kyle is too.

Billy joins Phyllis at Jabot and learns that Summer’s back…for good. She expects him to leave her alone. He assures her it won’t be a problem. Talk turns to Victoria. Billy says she’s shutting him out and he doesn’t know how to stop it. Phyllis suggests he leave her alone – he thinks ‘trying’ is all he has to do, but Victoria gets a vote. Billy snarks, “That’s all you’ve got?” Phyllis reminds him she’s his boss there, not his therapist or buddy. Billy concedes they should focus on business, and she probably wants to hear about 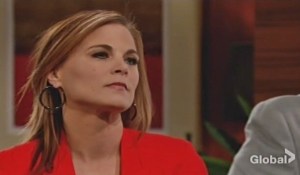 Victoria as much as he wants to hear about Nick. They agree to work on a report together. Mia arrives to do Phyllis’ make-up as they’re finishing up. Phyllis brings up her vow renewal and Billy blurts that not everyone gets the elusive second-chance. Billy’s on his way out when Victoria calls that Katie’s missing. Meanwhile, Phyllis senses something’s going on with Mia, and wonders if it has to do with her past affair with Arturo. Mia gets emotional; she loves Rey and would never want to hurt him again, but the way she feels about Arturo is part of who she is – how does she cut him out? Mia wonders how he could love her, and then love Abby Newman – a woman like that won’t make him happy. She doesn’t know how to stop thinking about this. Phyllis advises her not to cause trouble for Arturo and Abby even if it gives her a spark of satisfaction. Mia sniffs that she has everything including Arturo. Phyllis can tell she could get Arturo back if she wanted to, but it would burn up everything she’s earned – she must tell herself every day she’s over him. They hug.

Billy arrives at the ranch and demands to know what they’re doing and if someone’s on the property. Victor bellows that they’ll find Katie. Nick cautions she may have just wandered off. Billy retorts he had a daughter who wandered off once – he can’t lose Katie like he lost Delia! Bickering and debate ensue. Billy begins to call the police but Victor hollers, “Put it down!” and Victoria pleads with him to listen and suggests they talk to the head of security. Billy thinks she sounds like Victor and is about to call the authorities when Nikki hushes them. They hear Katie singing. They all listen and Billy realizes, “She’s in the walls.”