Thursday January 31, 2019: Summer questions Nick and Phyllis, Fen and Kyle are forced to work together, and Billy tries to get through to Victoria. 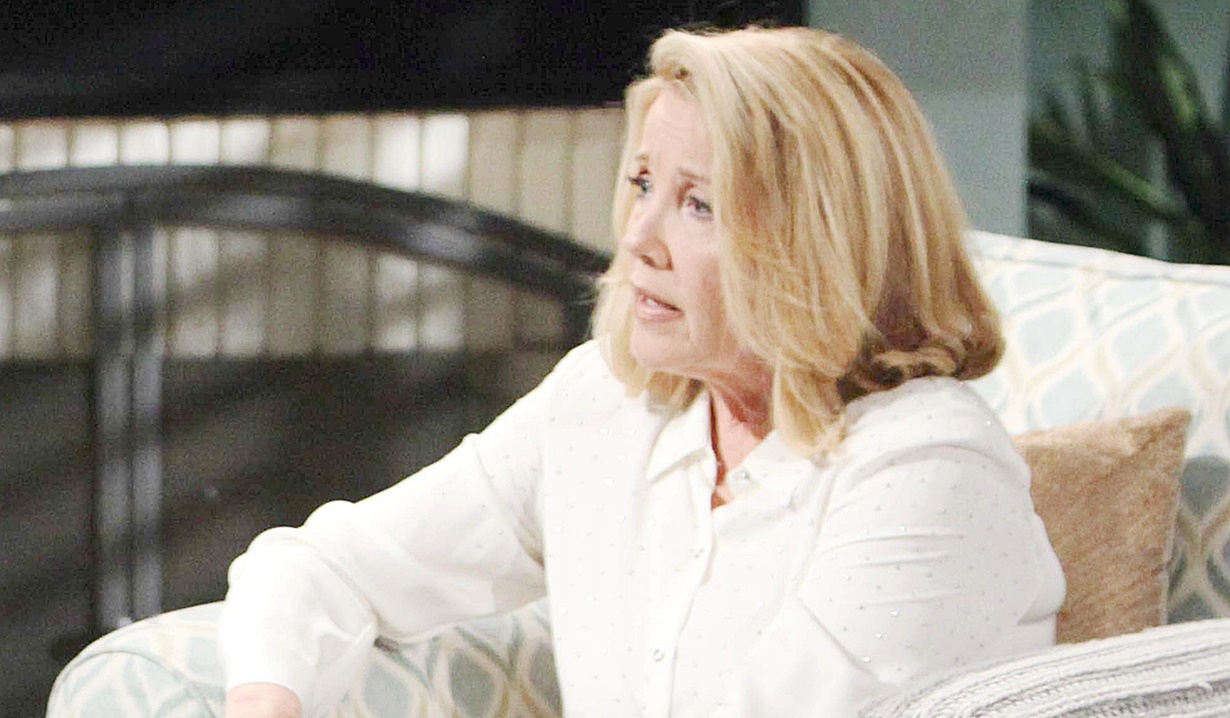 Lauren finds Kyle at Jabot and questions him about a photo shoot. He’s on top of it, and has two scorching hot guys as models. Lauren needs him to deliver. After, Kyle gets a message that the models are stuck in New York. He starts making calls and Lauren reappears to ask about his plan. Kyle assures her he’ll make the shoot happen.

At the ranch, Nikki doesn’t respond when Katie asks if she wants to meet her new friend. She flashes to JT’s murder while reading an article about Victor awaiting trial, and yells, “Stop!” Katie asks if she’s okay. Nikki takes Katie to play as someone watches and listens on the spy cam.

At home, Nick and Phyllis are glad they’re past their issues and canoodle. 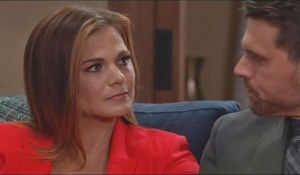 Summer’s eating and would rather not watch. She asks if they’re serious. Phyllis muses they don’t know what the future holds, and they agree they love each other. Summer thinks they’re keeping it casual because they’re rebounding. Talk turns to Victor. Nick plans to clear him. Summer asks if they’ve any idea who killed JT. Phyllis wants to change the subject, as Summer reflects on dating jerks. Nick advises her not to let what happened to Victoria stop her from putting herself out there. After, Phyllis feels guilty about lying to her daughter.

Victoria’s displeased to find Billy in her house and informs him he should have called and the kids aren’t there. He wants to talk, but she feels there’s nothing left to say after 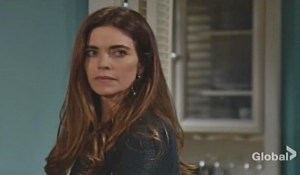 he told her she was incapable of feeling. Billy blames Phyllis for blowing things up. Vikki counters she told the truth. They rehash him going to Lily and deliberately hurting people. Billy doesn’t think Victoria’s cold, but she does – that’s the problem. He keeps pushing to talk, but Victoria rebuffs him. Billy finally says Phyllis encouraged him to go there. He wants to try and earn Victoria’s love and trust, and adds, “We can do this.” Victoria questions him bringing Phyllis into this. He thinks it’s a good idea if it gets him Victoria. She sighs; she doesn’t want to be pressured. Billy thinks she’s making excuses to keep from being happy. Victoria replies, “We’re done.”

At Crimson Lights patio, Ana wants Fen to put his phone down and focus. Fen brags his phone is blowing up now that he’s a recording star. She argues one song doesn’t make a star. Inside, Kyle still can’t find models. He spots Fen and Ana, and asks about Lily’s modeling agency. Ana says it’s not operating while Lily’s in prison. Fen and Kyle start snarking as Fen brags about getting lit with Summer. Kyle calls him a jerk. Ana interrupts and reminds Fen they’re getting nothing done. Later, Ana becomes frustrated again and calls Fen out for wanting to be a star, not to put in the work. She takes off, and Fen gets a call. He asks, “You want me to do what?”

At Jabot, Phyllis warns Kyle not to mess up this shoot. Lauren appears and announces she found one replacement model. Kyle can’t wait to meet him. They head to the studio, where Kyle still can’t find another model. Fen appears – his mom asked him to fill in. Kyle’s taken aback, then decides he should be the second model; he’ll school Fen. Phyllis thinks this will be amazing. The shoot gets underway with Fen and Kyle getting shirtless while they snark at one another. Fen’s stoked to hear he’s getting paid. Phyllis wants some shots of Fen, and Kyle lets him know his career holds more weight than being a singer. Later, Kyle runs into Summer and asks about her night with Fen. Summer thinks he’s jealous of her dating life. Kyle thinks Fen’s using her and doesn’t want to see her hurt. Phyllis appears and talks about Kyle’s smoldering photo shoot. Summer muses, “No surprises there.”

Nick arrives at the ranch and Nikki tells him Katie’s playing in Victor’s office. She admits she can’t stop worrying about Victor, and Nick reassures her. Nikki declares she can’t let him go into court and be hammered by Christine. Nick says, “Mom. No way.” He wants her to trust Michael and the legal system – she must promise not to turn herself in. They debate more until Nikki promises she won’t go to the cops. Nick’s pleased she’s taking care of herself. Katie reappears, and Nick goes. Someone watches as Nikki naps while Katie plays. Later, the sound of a glass breaking wakes Nikki up and Katie’s gone. Nikki searches and calls, “Katie? Where are you honey?”

Summer Makes Out With Fen, Leaves...

Billy & Victoria Panic As They Hear...