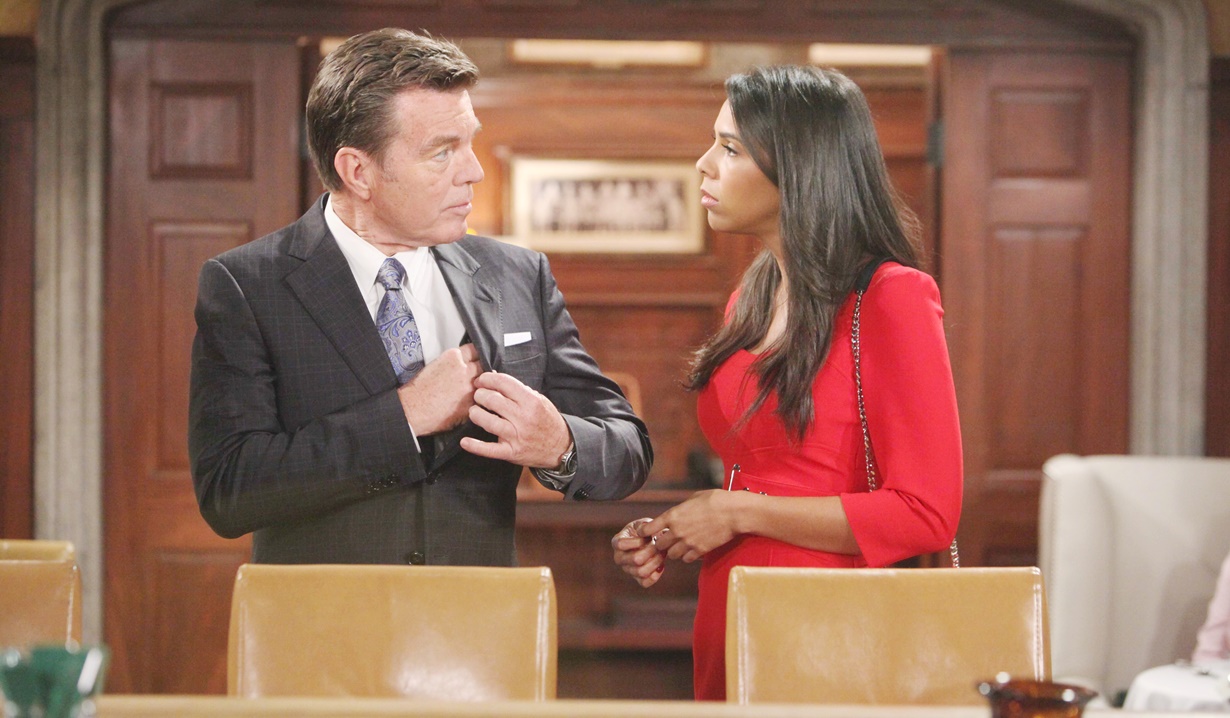 At the ranch, Victoria tells Victor that Katie wanted to come back to play with her ‘imaginary friend’. Katie runs along and Victor chuckles. They discuss business, then Victor asks Victoria to take over his position at Newman while he’s on house arrest. Victoria’s concerned about the overseas travel. He insists they’ll help with the kids. Victoria muses they’ll figure it out – she’ll step in. 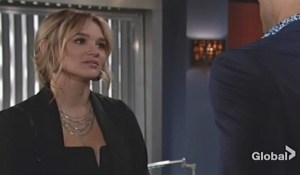 At Jabot, Kyle’s telling Lola, by phone, that he’ll miss her when Summer walks off the elevator. She announces she came back to see him and clear the air. Summer’s embarrassed about pressuring him for a second chance – she has a new outlook and explains she’s learned that kicking butt in business is better than any party. Kyle’s glad it worked out. She’d like to tell him about it…over dinner. Kyle doesn’t think it’s appropriate. Summer decides to accept his boundaries and heads out after giving him a hug.

At the Abbott mansion, Kerry thinks Jack wants a booty call, but he says they need a serious talk. He knows from experience that honesty is key, and admits he did something he’s not proud of 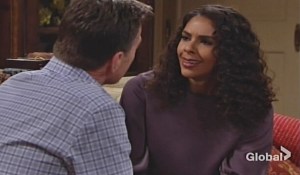 – he looked in her purse. Kerry pulls out the syringe as he apologizes and mutters about her having health concerns. She laughs – she’s not sick and there’s nothing to worry about, but she won’t say more…it’s personal. Jack asks her if she lied about traffic court. Kerry confirms it. Jack can’t understand why she’s holding back – is she on Methadone? Kerry reveals she’s giving herself hormone injections; she’s preparing to freeze her eggs. Jack wants to discuss it, but she feels it’s too soon. Kerry doesn’t know what the future holds, and is just giving herself the option. Jack shares that he once froze his sperm and it’s not a decision made lightly – it must be important to her to have a child. He decides they have different goals; she may be with the wrong guy.

At home, Phyllis leaves Nick a voicemail – he left early this morning, and she wanted to thank him for believing she didn’t frame Victor.

In Sharon’s place, Nick wants answers as to why she lied to him – she was the one he thought he could trust the most! Sharon explains she almost came clean before their wedding, 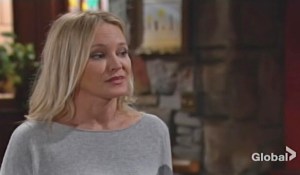 but the others found out and kept her quiet at her bachelorette party. Nick muses that was the night he nearly came clean about Phyllis. Sharon reflects on their inability to be honest with one another – they weren’t ready for the commitment. Nick complains she sent him a message by leaving her ring out – she didn’t tell him why she was so upset he impersonated JT – if she had they might still be together. Sharon concedes he may not have gone to Phyllis that night, but eventually he would have. She has no regrets and wonders if Phyllis is one of his regrets.

At Rey’s place, Mia looks at Abby’s engagement online and comments underneath that Arturo deserves a real woman. Just then, Abby comes to the door. She has flowers and apologizes for what happened at the vow renewal – she had no idea Arturo planned to steal her thunder. Mia asks, “Who said I was upset?” Abby feels Mia made it clear at the engagement dinner. She wants to make amends. Mia concedes she owes Abby an apology. Abby hopes she can forgive Arturo, since it’s the first time he’s been in love. Mia asks, “Is that what he told you?” Abby counters it was silly of her to ever feel insecure about what Mia had with Arturo – it’s ancient history. After, Mia offers to do Abby’s hair and make-up for her wedding, but Abby already has a stylist. Mia insists she sit down and get a preview. Abby pastes on a grin and takes the proffered chair. Mia decides she needs a trim and brandishes the scissors. She fantasizes about cutting Abby’s long hair off. After Abby’s gone, Mia stares at the scissors.

Summer checks in on Victor at the ranch and Victoria greets her enthusiastically – they’re proud of her accomplishments. Summer’s displeased they haven’t arrested anyone for running down Grandma. Victor distracts her by asking if she’ll assist Victoria at Newman. Vikki looks put out as Summer agrees; she’d like to come home. Later, Summer’s gone and Victoria and Victor call our for Katie. In the upstairs hall, Katie tells someone unseen, “I won’t tell,” as they appear.

Nick arrives at home and marvels to Phyllis about the lies the four women have told him – his decisions have been made in the dark. Phyllis says it was hell keeping it quiet. Nick can’t fault Phyllis for what she did that night…he would have done the same thing. He only feels gratitude and love. Phyllis tears up and they kiss. They’re making out on the sofa when Summer enters and announces she’s moving in – she’s sublet her condo and is staying to work at Newman.

Kerry and Jack make a decision.

Summer Makes Out With Fen, Leaves...

NAACP Image Awards 2020: black-ish, When They See Us, Greenleaf and Power Are Among TV Winners