Monday January 28, 2019: Victor surprises Abby and Arturo, Nick learns all about the night JT died, and Kerry frustrates Jack at the engagement dinner he hosts for Abby and Arturo. 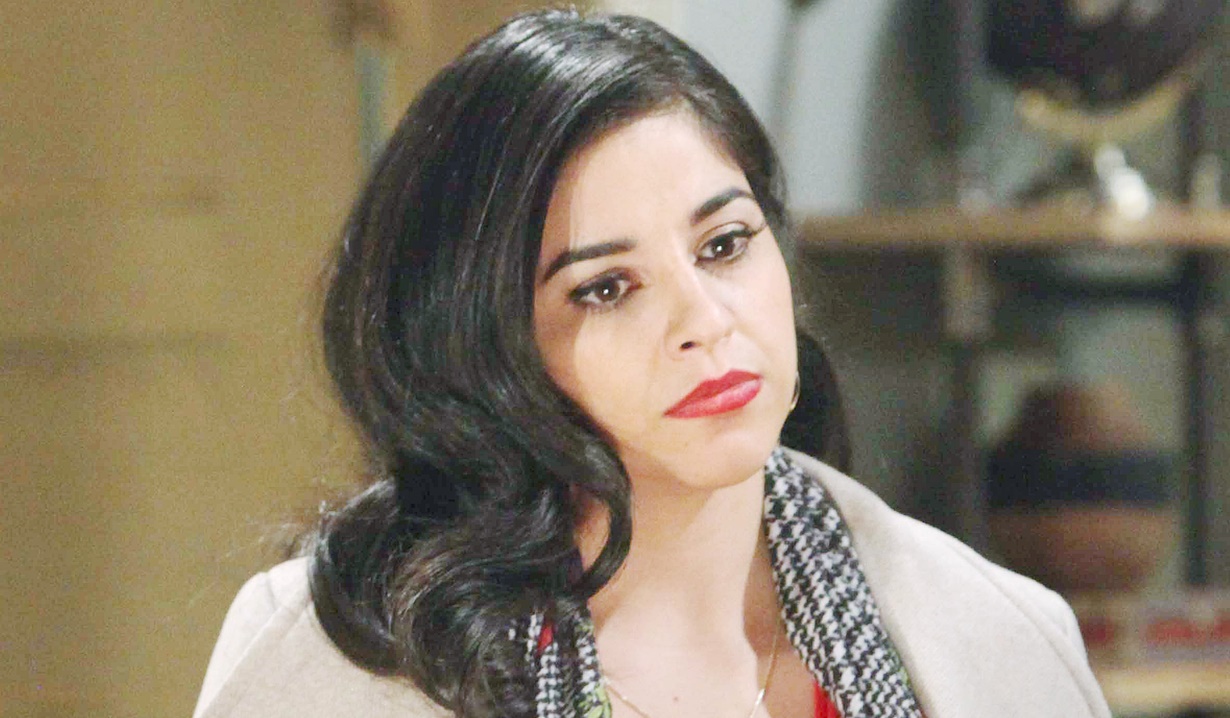 Abby and Arturo greet Victor at the ranch and announce their engagement. Victor’s unimpressed and lets them know it – he won’t watch Abby get hurt. Arturo wants a chance to prove himself. Victor opens his briefcase, produces a pre-nup, and says, “Sign this.” Abby’s outraged, but Arturo says he’ll sign, and does. Vic chuckles and hopes for a long engagement. Later, Victor reads to Johnny while Katie plays tea party. As Victor finishes the book, he realizes Katie’s gone. He finds her in the upstairs hallway. She says she’d been playing with a friend, but no one’s there.

At home, Phyllis tells Nick the guestroom was very comfortable, and asks if he believes her. Nick isn’t sure what to think. Phyllis feels if her word’s not good enough, they should settle it. Soon, Nikki, Victoria, and Sharon file in. Nick wants the truth about the night JT died. He rants about their cover-up. Nikki says he has no idea what they’ve been through. Nick wants to hear the truth then they’ll decide what to do next. Victoria recounts how she revealed JT’s abuse at their girls’ night, then sent him away when he showed up. 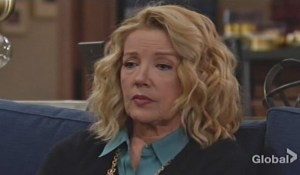 She recalls JT appeared in her bathroom later and revealed he’d left Victor to die and turned off his ventilator as they argued. Nikki remembers they heard the commotion from downstairs and how she reacted when they found JT trying to hurt Victoria. Phyllis and Victoria explain to Nick why they didn’t call 911 and instead made a pact. Nick learns they rolled JT up in a rug and buried him in Chancellor Park. They all hated lying but didn’t have a choice. Nick finds out that Tessa and Mariah also know, and that Tessa blackmailed them. Nikki believes the person framing Victor is someone close to them, and looks pointedly at Phyllis. Sharon learns she kept the poker, but Nick doesn’t think Phyllis is the person framing his father. Nick and Victoria leave for Jack’s, and Sharon calls Phyllis a lying, conniving bitch. Phyllis, Sharon, and Nikki have it out until Sharon insists they have to stick together or go to prison. Phyllis agrees – the more people that know, the more dangerous it gets for all of them. They marvel that whoever is messing with them has been watching them the entire time.

In the apartment, Mia fondles her necklace as Rey appears. She tells him everything about yesterday was amazing. He asks, “Then what’s bothering you?” Mia claims she has a hangover headache. Rey declares he took the day off – it’s still his honeymoon – and starts kissing her, but Mia pulls away.

At the Abbott mansion, Kyle tells Jack that Lola can’t make the dinner tonight. Billy appears as Jack says he didn’t even ask Kerry – she lied to him then gave him a flimsy excuse. Billy urges him to give her another chance. Jack calls to invite her – she accepts. After, Abby arrives with Arturo and updates Jack on her father’s pre-nup debacle. Jack tells Arturo he’s welcome there with open arms and he’s planned an engagement dinner. Kyle and Billy take Abby to the dining room, and Jack suggests Arturo invite his family as well. Arturo texts Rey.

At the apartment, Mia doesn’t want to go the engagement party, she’s angry that Arturo stole the spotlight at the vow renewal. Rey assures her they were the last thing on his mind when he proposed to Abby.

At Jabot, Kerry disconnects from Jack and looks at the syringe in her purse.

Mia and Rey arrive at the Abbott house, where Mia asks for a drink. They exchange pleasantries with Kyle, Billy, Arturo, and Abby. Victoria and Nick arrive next, and they head to the dining room. Jack lets Kerry in. In the dining room, Jack makes a toast as Mia stews across from the loving couple. Nick speaks next, and Rey notices Mia gulp her drink. Victoria takes a turn, and Mia calls for more wine, before deciding 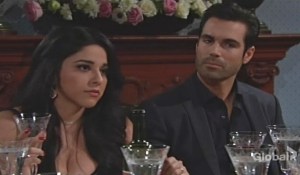 someone from the Rosales family should speak. Meanwhile, Kerry steps out to text. Rey tells Arturo he’s glad he found someone, as Mia glowers. She then advises Abby she’s welcome in their family even though they’re not as rich, and adds they all have struggles and secrets, and love. Mia pours more wine and loudly congratulates everyone. Rey drags her out as she promises to help Abby with her make-up. Jack steps aside with Billy to complain about Kerry taking calls and texting. When he grabs Kerry’s handbag, Jack sees the syringe inside. In the living room, Abby warns Arturo if he won’t talk to Mia, she will.

At the apartment, Mia rants to Rey that Abby’s using Arturo to piss off Daddy. Rey thinks that’s the booze talking. Mia cries that Arturo will get a broken heart if he goes through with this marriage. Rey insists Arturo can take care of himself. Mia cries.

Posted 6 mins ago
Posted on: TVLine