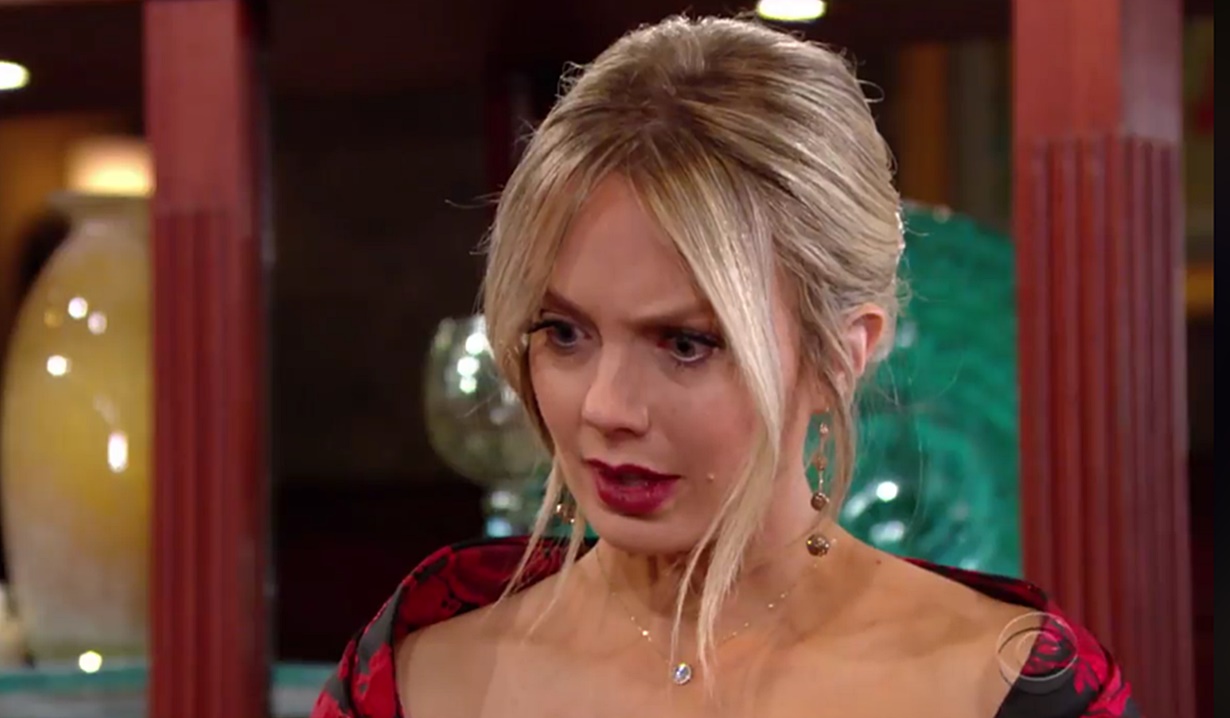 In the penthouse, Devon muses that Ana’s a really good songwriter. He learns she hid it because she was burned and asks, “You don’t trust me?” Ana knows he’d never hurt her but was still afraid – she also wanted to get his unbiased opinion and didn’t want anyone to accuse him of nepotism. Devon asks why she wanted to be paid outright. Ana admits she built up some debt while in school. He wonders what’s the part she’s leaving out. Ana wants to continue writing anonymously – she prefers to be behind-the-scenes. Devon agrees. Later, he hears Ana singing a song about memories at the piano and wipes away a tear.

At Jabot, Phyllis tells Nikki she kept the poker to ensure she and Victoria didn’t throw her and Sharon under the bus. Nikki can’t believe they trusted her. 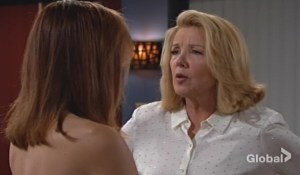 Phyllis points out she’s the one who confessed to Nick and Victor, then informs Nikki she has no idea how the poker got to the ranch. It was at a storage facility – someone must be watching them or tracking their moves. She warns they have to find out who is framing Nikki and Victor. Nikki’s only concern is the traitor in front of her. Phyllis argues why it makes no sense for her to be the person framing Victor. Nikki doesn’t believe a word out of her mouth.

In Rey’s apartment, Mia worries about all she has to do for the renewal as Lola arrives and tells Rey to go meet Arturo at her place. Rey exits.

At the Abbott mansion, Abby tells Kyle this vow renewal is Mia being ‘extra’; she’s only going to support the best man. Billy arrives and they ask him what’s wrong. Billy says, “In one word, Phyllis.” He explains that Phyllis came between him and Victoria. Kyle muses about their boss compartmentalizing like a good sociopath.

At Victoria’s place, Sharon updates her that Phyllis wanted to forge an alliance to protect themselves against her and Nikki. She muses about the redhead’s tendency to lash out. Victoria says she already has – Phyllis won’t be satisfied until she’s ruined her life. Sharon urges her to open up, and senses it has something to do with Billy. Victoria shares that Phyllis told her she was a rebound. Sharon calls Phyllis a cobra, 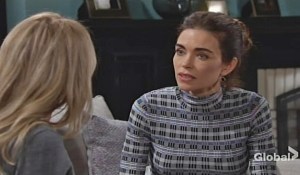 and assures Victoria of Billy’s feelings for her. Victoria further confides that Billy walked in on her kissing Cane – she doesn’t know who she is anymore – she kissed a married man. Sharon isn’t in any position to judge, but asks, “Cane?” Victoria can’t understand it, but she’s falling for Billy again and can’t allow it since JT may be dead, but he’s far from gone. She’s an accessory to murder and can’t let anyone get close. Sharon assures her she’s a good person who deserves happiness, and urges her to pursue Billy if she wants. They embrace. Later, Nikki arrives. Victoria says Sharon told her they’re now a team of three. Nikki warns she’s going to blow her mind and updates that Phyllis kept the poker – she believes she’s trying to frame Victor and wonders what to do about it. Victoria wants to tell Nick – he’s sleeping with the enemy. Nikki phones Nick – she has information that will throw a wrench into his investigation…and relationship.

At the Club, Rey tells Arturo it’s like they’ve wiped the slate clean. Arturo wishes him the best of luck. They embrace. Kyle and Abby arrive and learns Lola’s with Mia. 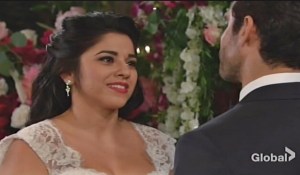 The Rosales brothers give him a hard time about their little sister, then laugh; they’re joking. Arturo tells Abby how much it means for her to be there – he promises a night she won’t forget. Sharon arrives as the Wedding March begins. Mia joins Rey at the altar. They exchange vows – Rey talks about their challenges and growing – he’s lucky to have her by his side. Mia tells Rey he’s a miracle to her; she’s lost without his love. The priest encourages them to kiss and everyone applauds. Arturo announces he has something to say. He kneels before Abby – with her he can see forever. “Abby, will you marry me?” Abby gapes.

At Jabot, Billy and Phyllis discuss marketing the new scent. She wants to know how what she said to Victoria led to him taking the private jet. He relays Victoria was so upset she kissed a guy – he saw them. Phyllis learns Billy went to see Lily because Vikki kissed Cane. Billy says Lily was calm. Phyllis muses, “Well, that’s not a good sign.” She promises not to say anything due to the twins. They agree Victoria and Cane are crazy. Billy can’t understand Victoria’s behavior. Phyllis feels Vikki had deep wounds – he’ll have to decide whether to put the work in or cut and run.

Jack demands the truth from Kerry.

Phyllis Makes a Confession About the...