Phyllis Makes a Confession About the Fire Poker 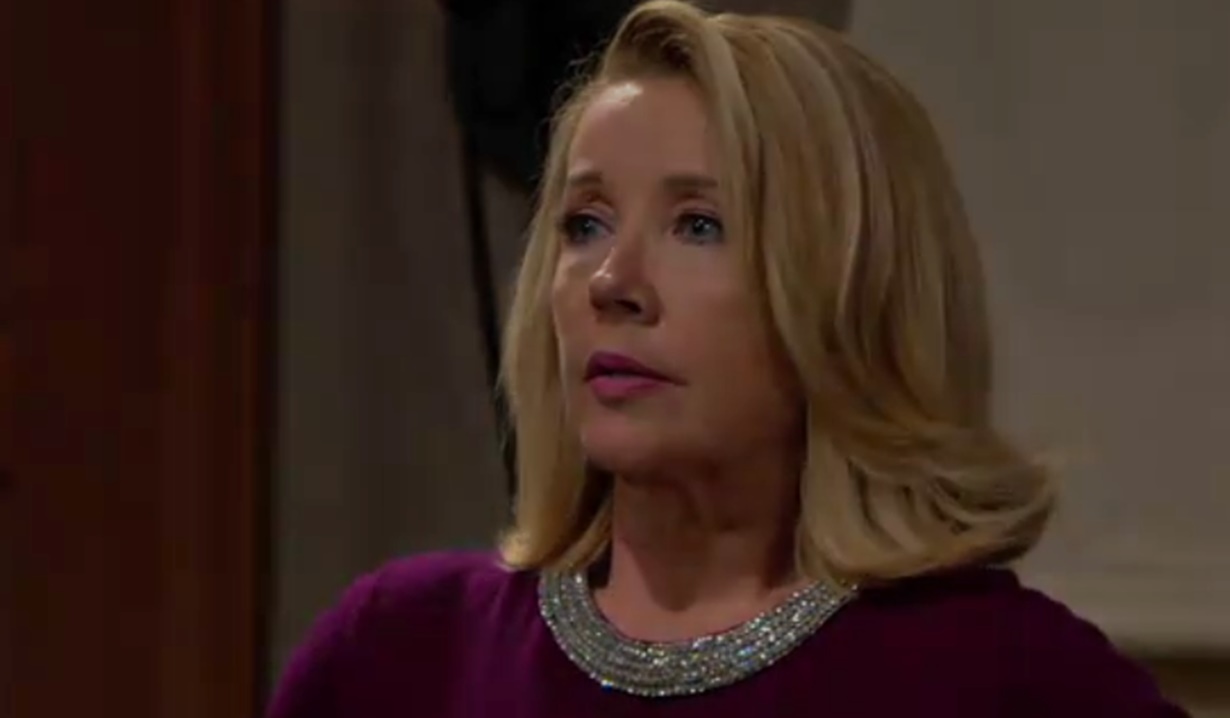 In Crimson Lights, Mia, carrying a box, bumps into Billy. He flirts that she was unforgettable from the Jabot launch and she relays she’s renewing her vows today – it’s not for a few more hours if he wants to sweep her off her feet. Billy muses, “Your husband carries a gun.” Sharon appears and Mia ensures she got her invitation for the renewal. Sharon wouldn’t miss it.

Arturo arrives at Rey’s apartment, where his brother asks him to be his best man. Arturo exhales, then says yes, he’s honored. Rey jokes the bad news is they need tuxes. Arturo teases about his best man speech, then tells Rey he deserves this happiness. Mia enters and agrees – they both deserve it. Mia’s pleased to hear there’s a best man in place. Arturo learns it was her idea.

Rey joins Sharon in the coffee house and apologizes for Mia blurting out the renewal news. Sharon’s happy for him and won’t let Mia intimidate her out of attending – they’ve nothing to hide.

Ana’s writing with earbuds in when Devon startles her entering the penthouse. He asks about her songwriter friend – they’ll need his name for documents. Ana advises it’s Rezzy. Devon notes it’s flashy.

Cane arrives at Victoria’s house and relays that Billy visited Lily and told her what happened. Victoria feels he had no right to do that, but observes he was merely the messenger; they did wrong. They laugh that they don’t even like each other and wonder why this is happening. Vikki supposes they’re frustrated with their lives. They begin commiserating – life’s coming at Victoria too fast and Cane feels he’s drowning. 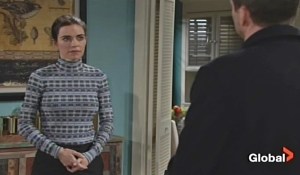 She thinks copping out is safer than fighting for the thing that’s hard. Cane muses, “Yeah.” He hopes to prove himself to Lily, and suggests they keep their distance. Victoria agrees. The doorbell rings – it’s Billy. Cane and Billy argue heatedly until Cane leaves. Billy snarks that he’s trying to blow them up. Victoria retorts, “How could you do that to Lily?” They bicker about whether it was his place to tell her. Victoria wants to be alone – this isn’t working. Billy counters he loves her, it didn’t work because she turned to Cane. Victoria complains about him rebounding after Phyllis turned him down. He feels he did everything right and wonders if she’s capable of caring about anyone any more.

At the Club, Nick takes a call from Phyllis asking if he can slip away from Dark Horse. He’s too busy. He disconnects as Nikki arrives. Nick tells her they need to dig deeper to find out who’s framing Victor – someone knows a lot about what she and Victoria did. Nikki’s glad her son’s back in Victor’s corner. Nick theorizes that if JT were alive and framing Victor it would explain a lot – who else would have a vendetta big enough to retrieve the poker from the lake? Nikki rushes out, bumping into a gushing Mia. After, Nikki calls someone – they need to talk in person. At the bar, Mia eyeballs Devon and Ana, then reminds 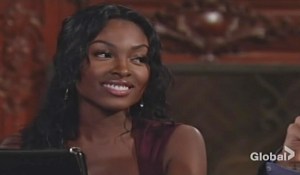 Devon she’s Lola’s sister-in-law. She talks up the new restaurant before asking about the Club for her vow renewal. He points out she’s not a member. Mia chirps that her friends are members and Lola’s her maid-of-honor. Devon grins – she reminds him of someone else who never took ‘no’ for an answer. Mia was a huge Hilary fan. Devon has Ana fit it into the schedule. Mia squeals. After, Ana tells Devon she was working him. Devon observes no one works him – sometimes he just lets them think they are. Ana laughs nervously. Later, Nick sits alone looking at a photo of him and Phyllis.

At home, Devon presses to see what’s in Ana’s notebook. She says the songwriter’s real name is in there. Devon advises she’s not as good a liar as she thinks she is. He’s found out everything he needs to know about the songwriter – the name on ‘Rezzy’s’ LLC is hers. When he threatens to pull Fen’s song from distribution, Ana admits she wrote the song.

Mia encounters Arturo at the coffee house. He questions her hatching the vow renewal idea right after he threatened to tell Rey about their encounter. Mia is getting on with her life and suggests he do the same.

At Jabot, Nikki accuses Phyllis of holding onto the fireplace poker to frame Victor for what she did. Phyllis rants. Nikki feels a fool to think they were ever in this together at all – this fits her like a glove. “Tell me I’m wrong,” she urges. Phyllis admits she’s not – she had no intention of going down for this and never threw the poker in the lake.

Arturo Proposes to Abby at Rey &...