Friday January 18, 2019: Victor arrives at the ranch, Kyle remains in love but frustrated, and Devon deals with a tense situation. 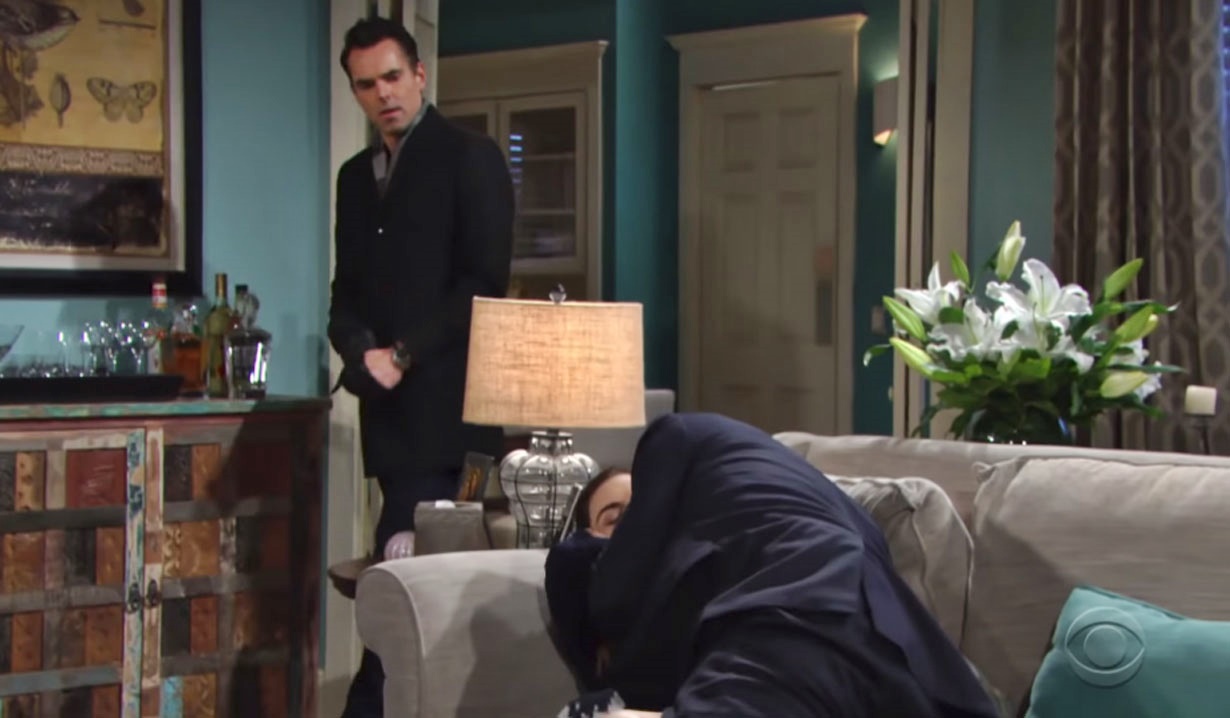 At the ranch, Victor emerges after Nikki fires her gun and chortles, “Thank God you’re a terrible shot!” Nikki’s relieved and can’t understand how he’s there. Victor explains Michael pulled strings to move up his bail hearing and he wanted to surprise her – he probably should have called first. Victor shows off his house arrest ankle bracelet, and Nikki asks him not to break the rules. They kiss as someone watches on the surveillance feed. Later, Victor mentions Nick’s visit. Nikki admits to Victor that she couldn’t keep the secret from Nick any longer. She tells him she struck JT in the back of the head and he died. Victor isn’t concerned that she let him be wrongly accused, but mulls how they will keep her safe.

At Crimson Lights, Mariah wants to know how Nick’s so sure Victor’s innocent. Nick thinks it’s clear he’s being railroaded. Mariah doesn’t believe he killed JT either. Nick asks what makes her so sure he’s innocent. Mariah figures Victor would have rather put JT in prison, and he’s being framed. Nick’s relieved GC Buzz will no longer cover it.

At the Abbott mansion, Kyle tells Lola he’s taking her to outer space tonight. She laughs, “What?” They go outside, where he shows her how to find the North Star and constellations in his telescope. They kiss, then he shows her a star near Cassiopeia, which he thinks could be their star. 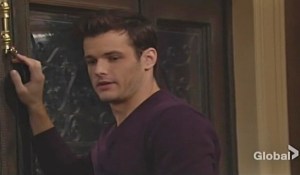 Back inside, Kyle ask Lola to close her eyes, then presents her paperwork for their star, which is named ‘Kola’ after them. He assures her it only cost $19.95. Lola calls it cheesy and perfect. They’re making out when Kyle’s phone keeps going off – it’s Jack warning he’s on his way home. Kyle says he’ll be twenty minutes, which is enough time to…make hot chocolate. On the way to the kitchen, Kyle looks frustrated. After their beverages, they express their love and Lola leaves.

As Cane and Victoria make out on her couch, Billy walks in and asks what the hell is going on. Victoria leaps up and exclaims, “Billy!” Billy figures Cane took advantage of Victoria, who claims she kissed him. Billy rants about Cane being a sleaze and Lily deserving better. Cane agrees and exits. 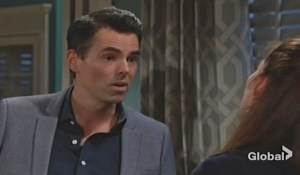 Victoria’s not in the mood for a lecture. Billy thinks she was acting out because of what Phyllis said – he has done worse, so he won’t judge. Victoria snarks that they’re not dating – she doesn’t owe him anything. She adds that he’s on the rebound, but Billy insists the moment with Phyllis was a mistake. Billy urges her not to let Phyllis drive a wedge between them – the only future he wants is with Victoria. She questions what he’d have done if Phyllis had taken him back. Billy shrugs, “That’s hypothetical.” That non-answer tells her everything she needs to know. As they bicker, Billy learns that Victoria and Cane kissed before. Victoria asks Billy to just go.

Nick arrives at the ranch, pleased to see his parents together. Nikki relays she told Victor what she did. Nikki displays the clothes and the poker and explains what’s been going on. Victor will take care of everything now – they must find out who knows. Nick muses it’s no coincidence the poker showed up the night of JT’s memorial. Victor wants to destroy the evidence but Nikki refuses – they can prove Victor’s innocent. Victoria arrives, hugs Victor, and gets up to speed. Victor takes Nick aside – he can’t leave the perimeter of the ranch, so they agree to work together. Meanwhile, Victoria assures Nikki she understands her confessing. Talk turns to Billy and Vikki relays he only came to her when Phyllis said no. Nikki doesn’t believe she’s second in his eyes. Victoria’s confused and doesn’t know what she wants.

Devon admits a frantic Cane to his penthouse. Cane rambles about getting into it with Billy Abbott and needs to take Devon’s jet to see Lily in order to save his marriage. 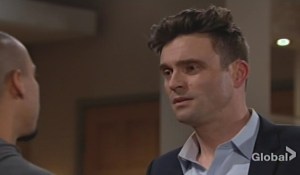 Devon worries about his emotional state and wants to know what’s going on. Cane stresses at length about not being able to be with Lily and the distance between them getting bigger. He admits he ran into Victoria, who had been arguing with Billy, and they kissed. Devon snaps, “What?!” Cane hates himself and hollers, “I don’t know what is wrong with me!” He wants to be honest with Lily and pleads with Devon to help him. Devon thinks he wants to make himself feel better and suggests he go home and figure out to deal with it so Lily can get through her sentence.

Billy arrives at the prison to visit Lily.

Sharon tells Phyllis she doesn’t respond well to threats, especially from her. Phyllis responds that she is not a threat, it’s the Newmans they need to worry about.

Lily Learns Cane Cheated on Her and...