Wednesday January 9, 2019: Nate intervenes with Devon and Ana, a nervous Lola gives her presentation, and Cane gets a letter from Lily. 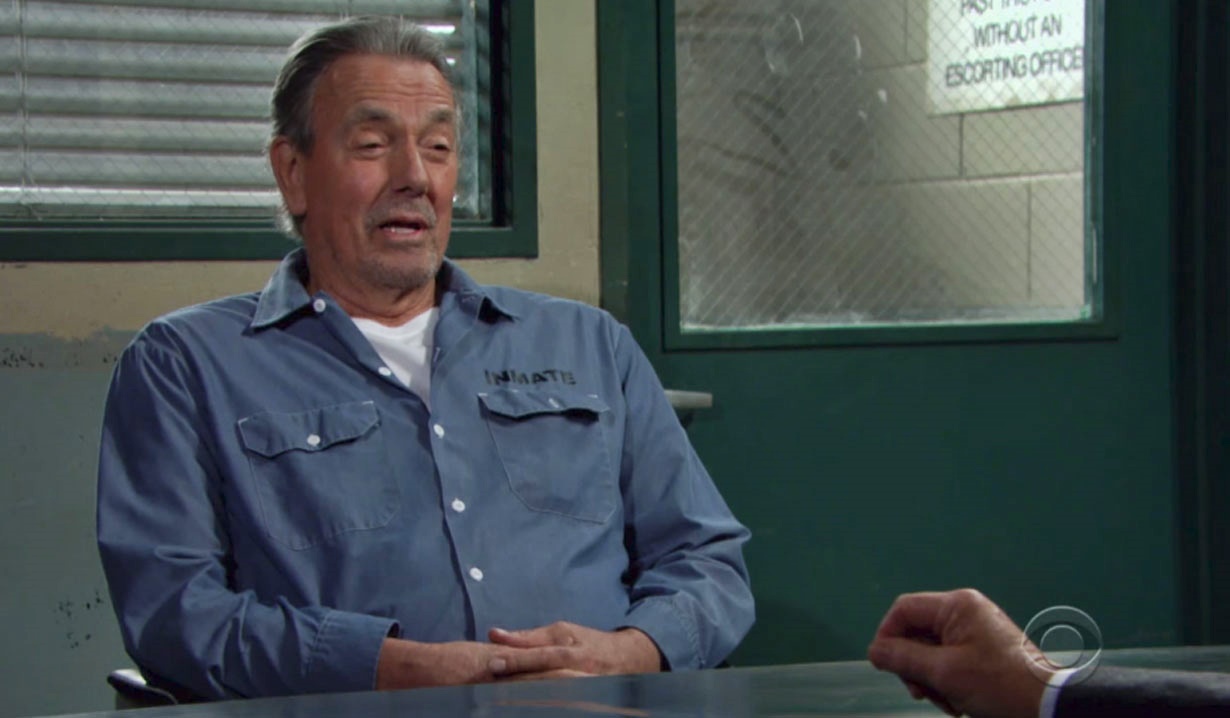 At the penthouse, Ana makes her way down the stairs with her luggage and looks around sadly. She leaves Devon a note and exits. Later, Devon arrives, calls out for Ana, and finds her note.

At the Abbott house, Abby finds Jack reading up on Victor’s arrest and proclaims he’s innocent. She sneers that Christine loves putting her father on trial, but needs to face reality. Abby realizes Jack thinks Victor is guilty. Jack says a jury will decide, not him. He doesn’t want to fight, and asks about the restaurant. Abby says Lola’s presenting her menu options today and invites him along, but Jack has something important to do.

At home, Cane finds a letter from Lily in the mail. It starts out noting that their calls have been strained. Cane opens a beer. Lily reflects that it’s helped having her dad close by, and talks about getting to know the women there. 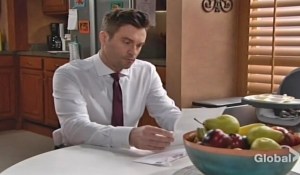 Lily notes their phone calls are hard sometimes because they avoid discussing the ‘now’. The life she’s living is becoming more normal, as though she’s losing who she was, and is never coming back. Lily thanks him for being the best husband and father possible and expresses her love. He puts the letter away as the twins appear. Mattie and Charlie feel the three of them should attend Reed’s memorial for JT. Cane blurts, “That’s not a good idea.” They argue Cane into submission and he agrees to go as a family.

At Crimson Lights, Lola admits to Kyle that she’s nervous about her presentation for Devon and Abby. She’s there working to keep from going crazy. Kyle reassures her. 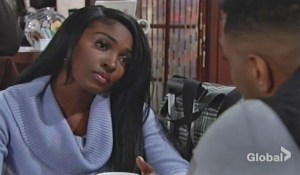 Lola keeps second-guessing herself. Kyle advises her to just lock it down. Inside, Nate spots Ana and asks if she’s going on a trip. Ana tells him Devon doesn’t want her around, so she’s leaving and won’t be back. She explains what happened. Nate feels Devon over-reacted. Ana argues it’s not the first time this has happened; he doesn’t want her around. Nate offers her a shoulder to lean on if she’ll give Devon another chance and tell him how she feels in person.

At the station, Victor learns he has a visitor – it’s Jack. Victor smirks, “I’ll be damned.” He mocks Jack for working for his son. Jack came to check on him – an act of charity. He informs Victor he’ll look out for his family no matter how long he’s ‘away’. Victor doesn’t need his help – he runs things from in there. They spar about Jack being accused of killing Victor last year, and now Victor being accused of murdering JT. Jack thinks he’s guilty. Victor informs him he’s wrong. Jack muses that Victor’s radar was on the fritz with JT, and sympathizes with Michael having to try and win this case. Jack’s amazed he won’t even look out for himself. Victor wonders if maybe Jack set him up. Jack denies it. Victor admits he hated JT’s guts but wouldn’t kill him in cold blood – he wouldn’t do it to Reed or Victoria, nor would he leave a gun or bloody clothing as evidence. Jack marvels that he could be telling the truth, but warns the police are determined to nail him. Victor says they have nothing. Jack wonders how many people in for life have had that same thought.

Ana and Nate arrive at the penthouse, where Devon thanks Nate for convincing Ana not to go yet. Devon admits he doesn’t know what he’s doing – he doesn’t know why he flipped out yesterday, but he shouldn’t have because he trusts Ana. He concedes she was right about the song needing more feeling – 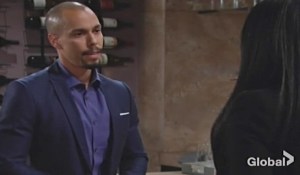 most of the time he’s trying not to feel at all. Devon promises to be a better brother if she’ll stay. Ana agrees. Devon gifts her with a ‘family’ photo frame. Later, Abby arrives, and they discuss Victor. Devon asks Ana to stay as Lola comes in with her food. They all agree the dishes should set trends. Lola’s presentation goes over perfectly except Devon feels her pricing suggestions are too low. Lola is offered a contract and advised to have a lawyer look it over. They also give her an advance with ‘zeros’ – she’s worth that and more. After Lola’s gone, Abby and Devon enthuse about working together. Abby thinks Devon seems good and it’s because of Ana.

Lola arrives at the Abbott house and tells Kyle her presentation went incredibly – it was like they were a team. Kyle agrees to give her a lawyer recommendation and convinces her she earned the big advance. Kyle gushes, then tells her, “I love you.” Lola loves him too. They kiss.

Nick tries to keep the peace.

Arturo Cozies up to Mia While Fixing...