Cane & Victoria Make a Pact to Keep Their Kiss a Secret

Wednesday January 2, 2019: Kyle asks Lola for another chance, Abby learns Victor was charged with murder, and Mariah wants to change. 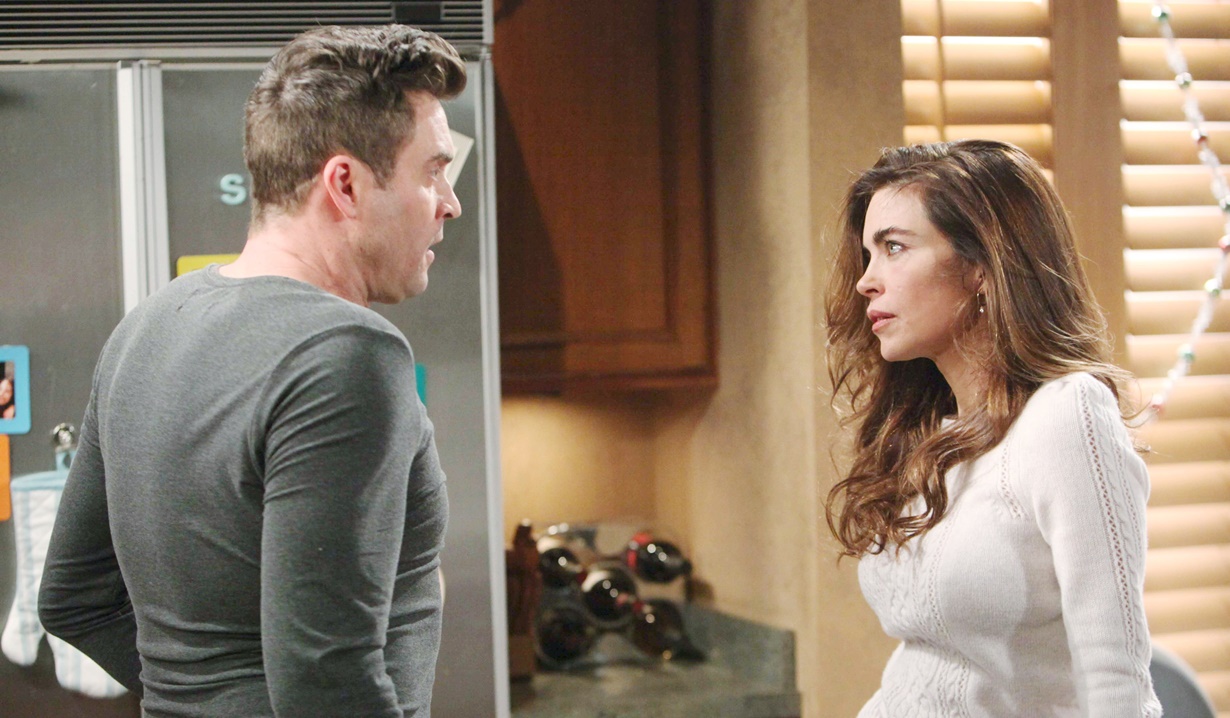 In the Ashby kitchen, Cane and Victoria’s liplock ends and Cane hollers her name as she bolts out the door.

Victoria arrives at home with Cane behind her insisting they talk about the kiss. Vikki explains that her recent stress led to the reckless impulsive move. Cane wants to be clear they won’t tell a soul as he could lose his marriage and family. Billy arrives and senses he’s interrupting. Victoria explains they were discussing Reed and Charlie’s involvement in Nikki’s accident. Cane and Billy bicker. 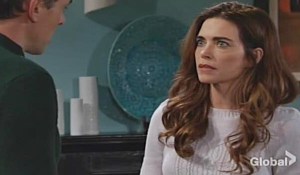 Vikki assures Cane she agrees that no one should know their private business. After Cane leaves, Victoria tells Billy she and Cane will have to work together to protect their sons. She’s relieved to get a text from Reed. Billy breaks the news about Victor being charged with JT’s murder. Victoria says he’s innocent. Billy offers up a pep talk and his support, and she kisses him.

In Crimson Lights, Fenmore scoffs that he forgot to wish Kyle a Happy New Year since he was busy kissing the hottest girl in GC. He taunts that he and Lola will be seen together everywhere soon. Kyle warns the ‘cocky punk’ they were only on a break and to stay away from her. As they bicker about whether she belongs to Kyle, Lola appears. She doesn’t belong to anyone and wants them both to leave so she can run her business.

At the station, Victor informs Rey that once he’s proven innocent, he’ll have a lot to answer for. 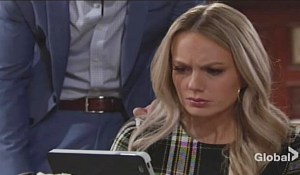 Kyle joins Abby at the Club and relays that he made things worse with Lola. She’s disappointed he got caught arguing with Fen and urges him not to give up on Lola, who knows deep down he didn’t mean to offend her. Abby gets a GC Buzz alert – Mariah reports Victor’s been charged with JT’s murder. Abby and Kyle watch as Rey confirms that Victor is being held without bail. Abby’s furious about being the last to know and heads out the door.

Cane bellows for Charlie to come into the Ashby kitchen and confronts him with keeping quiet about being involved in Nikki’s hit-and-run. Charlie explains he didn’t know Reed had hit a person, he was so messed up that night. When Cane asks, Charlie admits he talked Reed out of confessing because he panicked. Cane reassures his son, who doesn’t know how he’ll live with himself if Mrs. Newman dies. Cane supports Charlie, and they hug.

Abby arrives at the station and lashes out at Mariah for making her father seem guilty in her report. Mariah defends herself, but Abby keeps going. She warns that what Mariah is doing is wrong, and when this is over, her father will make her pay. Abby moves on to Rey, who refuses to let her see Victor initially, then gives in. Victor assures her this is temporary and worries about the bad publicity affecting her new restaurant – he’ll never stop caring. After, Abby informs Rey she’ll do everything in her power to prove her father’s innocence. Victor’s returned to his cell.

At the Club, Mariah tells Tessa about her run-in with Abby. Mariah feels Abby’s not wrong – she helped put a lie out there…they both know who killed JT, and it wasn’t Victor. Mariah beats herself up at length and decides she must change. She wishes she could tell the truth, but Tessa warns Rey would lock up the four women and throw away the key – it’s better Victor go down for the murder than her mom. Tessa then urges Mariah to check in on Fenmore, who’s alone at the bar. He complains his music is going nowhere fast, like the rest of his life, and alludes to wishing he’d kept his mouth shut. Mariah advises him to ask for a do-over.

Kyle returns to Crimson Lights and tells Lola he wants to understand where he went wrong, and asks for a chance. Lola doesn’t think it’s that hard to get. Kyle wonders if she’ll really punish him 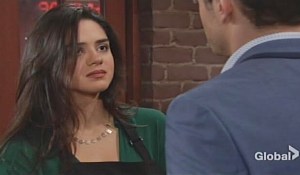 for being able to buy her nice things. Lola shakes her head; he really doesn’t get her. Kyle asks, “And Fen does?” Lola’s frustrated – she thought he knew her well enough to know the gift would make her uncomfortable, and doesn’t want to be with someone who uses money to show they care. Kyle confides his mother showed her love by buying him things – so did his dad and Victor. He wants to respect her boundaries and vows to change. Lola kisses him. Fen arrives with a flower and looks dejected.