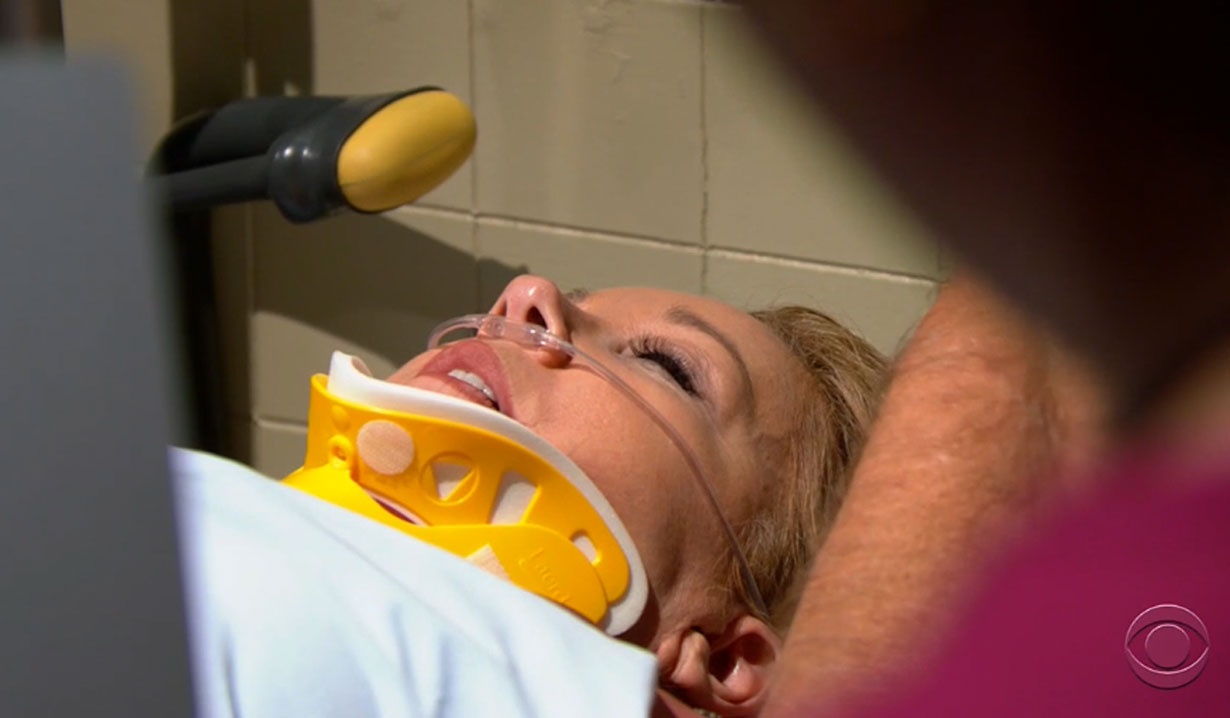 At the Ashby house, Charlie and Reed argue about whether to tell Cane about what happened to the car. Reed doesn’t think it’s a good idea. Charlie declares that tonight sucks and exclaims over the dent in the car. He worries if something was alive it’s not anymore. Reed feels awful but it’s bad for both of them. He urges Charlie to go to sleep. Later, Cane chats with Charlie, who tries to get away from him. Cane can smell the beer on him and asks if he drank and drove. Charlie denies it. Cane lectures and asks if this is a regular thing and if it’s about Lily. Charlie admits what happened with Shauna. Cane advises him to go to bed, unless there’s anything else.

At the hospital, Nikki’s wheeled in unconscious. Nate arrives and finds out the hit-and-run patient is Nikki Newman. He examines her and intones, “Keep fighting, Nikki. Keep fighting.”

At Victoria’s place, Billy realizes she’s concerned about her father’s disappearance. Victoria says it’s not like him to neglect Newman, but Billy thinks he’ll show up back in town with JT’s killer’s head on a platter. Victoria grimaces. Reed arrives, and Vikki senses something’s wrong. Reed rambles about a lame party and heads up to bed. Victoria talks about the turmoil Reed’s faced this year. Billy feels it’s not her fault. 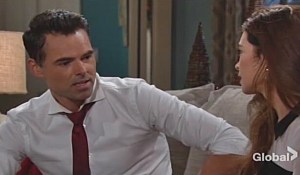 Victoria wants to make some good memories before the year’s over and Billy vows to help. Talk turns to him pushing Phyllis’ buttons tonight. Billy insists she’s his boss, that’s it – he’s sucking it up until he can get the company back. He assures Vikki he’s not gambling again. She compliments him on being a hero with the Jaboutiques idea. Billy regrets his bad judgement calls with Brash & Sassy. Victoria suddenly gets a shocking call. After she and Billy leave, Reed, in bed, gets a text from Charlie updating that Cane busted him for drinking. Reed doesn’t want to go check the road.

At home, Phyllis and Nick discuss the success of the Jabot party. 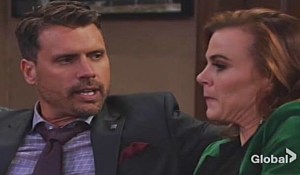 She enthuses that morale is up and Nick compliments her drive and ambition. Phyllis tells him he got sexier with ambition. They canoodle and she pours a toast. They remark on Billy and Victoria showing up together and agree he feeds on attention. Nick wonders if it would bother Phyllis if they got back together. Phyllis is happy and hopes Billy can grab the same thing…even if it is with Nick’s sister. Nick worries Billy’s trying to send them a message. Phyllis reflects that no one will hurt Victoria again, and acknowledges having respect for her. They go to bed and make love. After, Nick gets a call about his mother and says, “I’m on my way.”

At the Abbott house, Jack’s brought Kerry home after the party to see how he fixed the tree. 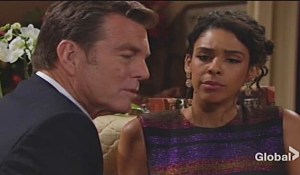 They find themselves beneath the mistletoe, which she notices has multiplied, and kiss. Kerry tells Jack it felt good being a part of something tonight. Jack wishes his dad could hear her say that, and Kerry makes an observation about the Abbotts being okay with the current CEO. She asks about the history with Jack, Phyllis, and Billy. Jack explains, and assures her he’s past it. Jack gets a message from Billy about Nikki and they head to the hospital.

Nick and Phyllis arrive at the hospital, followed quickly by Victoria and Billy, and Jack and Kerry. Nick becomes upset about Nikki being left in the snow, and when a police officer appears, he hollers that he wants the person who did this in jail now! Jack calms him, and Nick leaves to try and reach Summer to see if she’s heard from Victor. Phyllis updates Kerry that Jack and Nikki were married, and Jack still sounds like Nick’s stepfather…he’s loyal. Kerry wonders how many wives he’s had. Jack reappears and Kerry heads home. Nick returns, unable to find Victor, and urges Phyllis to go. Billy reassures Victoria, and leaves to relieve Hannah. Jack, Nick, and Victoria sit, and pace, for hours. Nick fumes that GCPD still has no idea who hit his mom. Jack heads home for a shower.

At Victoria’s house, Billy updates Reed that his grandmother is in the hospital.

At the hospital, Nate reports to Nick and Victoria that Nikki’s spleen was removed. He recommends they reach Victor and reveals Nikki had a high alcohol content. Nate walks off, and Reed rushes up to his mom and uncle. He learns his grandmother was the victim of a hit-and-run in front of the Club.

At the Ashby house, Cane’s happy Charlie didn’t drive – he doesn’t want to be like Reed. He exits, and Charlie takes a call from Reed, who says it was his grandma on the road last night…he’s at the hospital and she might not make it.

Reed and Charlie cover their tracks.

Nikki's Run Over by Reed & Charlie...

Reed Decides to Confess to Nikki's...