Thursday December 13, 2018: Abby carries out a plan, Victoria makes amends with Reed, and Cane gets in the Christmas spirit. 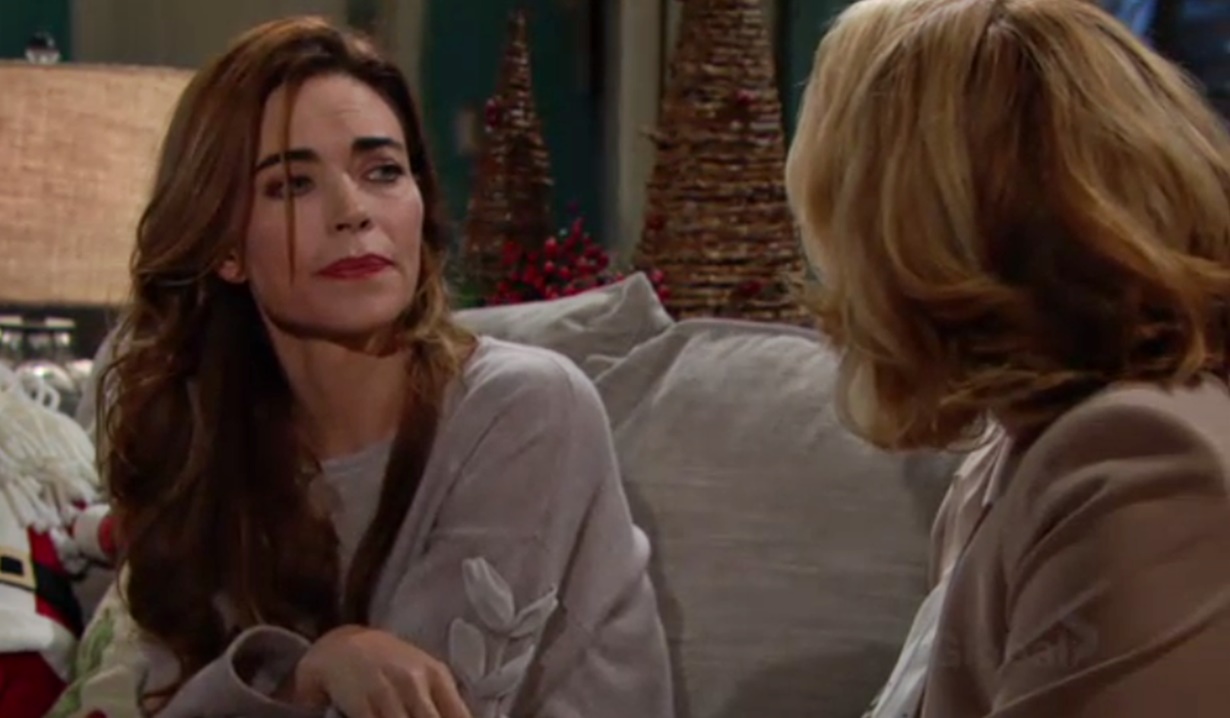 At Victoria’s house, she and Nikki tell Reed that someone is trying to frame Victor, who would never kill his father. Reed wants the murderer to pay, whoever it may be. Once Reed’s gone, Nikki muses to Victoria about how bad it would be if Reed ever found out they are protecting themselves. They aren’t keen on him talking to Rey, who may try to recruit him to get information. Nikki wants to convince Rey that Victor’s innocent…she’ll start tonight. Later, Reed assures Victoria he’s not mad at her, but he wishes she’d told him the truth; he could handle it. Victoria’s pleased with his maturity. He confides in her about Cane not seeing he’d grown up – he made it clear he doesn’t want him around Mattie. Victoria decides she’ll get involved.

Mariah arrives at the apartment and finds Tessa curled up on the sofa. Tessa mumbles about karma, but Mariah insists she was victimized – this was Sharon, Nikki, and Victoria traumatizing her. 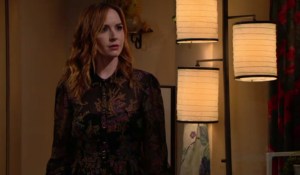 Tessa doesn’t want to talk about what happened to her. She rushes out. When she returns, Tessa is happier – the GCAC is hiring help for the holidays. Mariah refocuses on her being traumatized and threatens to go to Sharon about Nikki and Victoria. Tessa reveals that Sharon was there too – though she was clearly uncomfortable. Mariah reels and refuses to keep quiet about it, when Tessa asks.

At Crimson Lights, Lola introduces Mia to Fenmore. Mia’s impressed to hear that she’s catering a dinner at Devon Hamilton’s place tonight, and hopes Lola will get her an introduction. Mia’s got a booking for a Genoa City A-lister tonight as well, but won’t say who it is.

At the Club, Abby tells Devon she’s got a top chef from Miami to cater a private event at his penthouse tonight. He warns the chef will have to impress Ana too.

At the Ashby house, the twins are upset that Cane seems to want them to ignore the Christmas holiday because their mom’s not there. After Cane leaves, Mattie and Charlie discuss the situation. Charlie decides he’ll get the ball rolling on Christmas on his own. Mattie will help.

At Devon’s penthouse, he and Ana thank Abby, who goes into the kitchen to warn Lola she has to stay in there. Lola argues it’s traditional for the chef to go out and introduce themselves. Abby pleads with her to do this her way. Later, Devon and Ana are raving about the food. Fenmore returns to the kitchen and updates Lola that they love it, and that he thinks Ana wants him. Before the final course, Fenmore announces he’s a musician and hands Devon a demo. 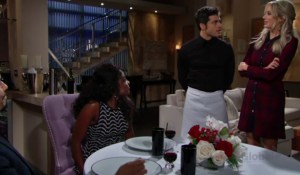 Abby and Lola read him the riot act in the kitchen. After, Devon and Ana declare the meal the best they’ve ever eaten. Abby gets Devon to commit to opening a restaurant with her. Devon wants to meet the chef, so Abby brings in Lola. Devon wants an explanation. Abby lays out her plan to center the restaurant on rising star, Lola. Devon isn’t happy she played him, and points out Lola hasn’t accepted an offer. Lola didn’t even know about it. Devon commits, and so does Lola. Abby squeals.

Nikki arrives at Mia’s apartment and tells her there’s nowhere else she’d rather be tonight. Mia offers up candy cane cocktails to start, and Nikki declines. As Mia gets to work on her make-up, she asks about making contacts among the Genoa City social scene. Nikki notes she’ll need introductions, and she’d love to help her, but she has reservations because of her husband being fixated on Victor. She hints he could get Rey fired for wrongfully accusing him and muses about women having to set their husbands straight. She thinks if Mia could find out enough to stop this insanity it would save a lot of ugliness. Mia will help. When she leaves the room, Nikki pours vodka in her coffee cup and drinks it. Later, Nikki gushes about her make-up and tells Mia she reminds her of younger self – she was once a working-class gal who worked as a dancer. Mia loves this. Nikki thinks she can learn to fit in with her social set and gives her a big tip…she looks forward to a mutually beneficial relationship.

At Crimson Lights, Cane and Victoria discuss Reed and Mattie. Cane’s worried about history repeating itself, and Victoria argues Reed’s matured, and they’re not dating. She advises against forbidding them from hanging out; they’re a support for one another. They commiserate about single-parenting. Cane confides his trepidation about the holiday. Victoria finds one thing each day to make the kids happy. Cane grins.

Cane arrives at home and surprises the twins with a Christmas tree and ornaments from the Chancellor Estate. He got Christmas spirit from an unlikely person.

At Victoria’s house, Nikki updates her daughter on her ‘negotiation’ with Mia, who has certain goals she’d like to achieve. Victoria worries Rey will find out and she’ll become his number one suspect – this could have been a fatal mistake.

Reed Rages at Victoria for...

Rey Explodes at Mia Over Her...