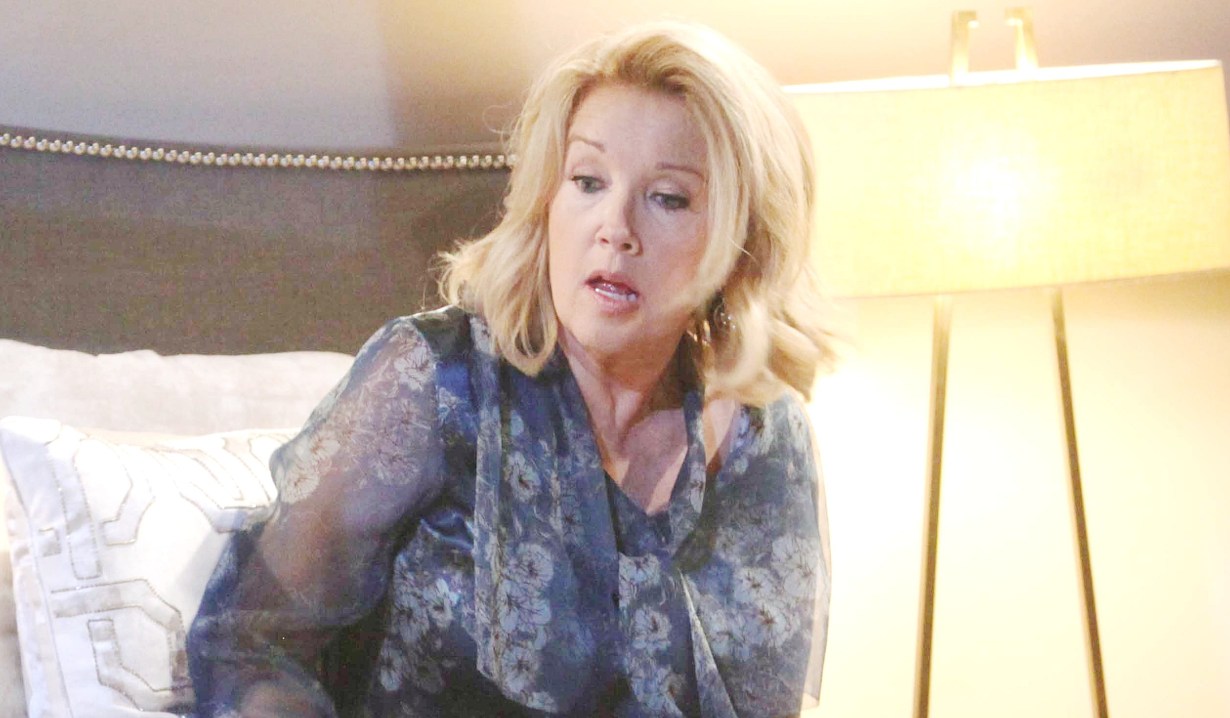 At Victoria’s house, Nikki, shaken, pulls out the clothes they buried JT in. Victoria asks her to put them away, as she describes finding them on the bed. Vikki wonders how the culprit got past security…it has to be someone close to them. Nikki hides the bag as Reed enters. Victoria greets him, and Reed says he wanted to surprise them. Nikki observes, “You certainly did that.” Reed reveals he plans to find out how his dad died over his break. Victoria helps him take his things upstairs, and Nikki drinks from Victoria’s wine glass.

Phyllis arrives at home where Nick asks if there were any problems with the contract. Phyllis muses she just tied up some loose ends.

At the Abbott mansion, Billy wants Abby to go someplace and hang out. Abby notes they roll up the streets pretty early in this town, and offers apple pie instead. Billy declines, and Abby heads upstairs.

In the Abbott living room, Billy hears Jack give a statement by phone about Jabot’s Barlow deal. Jack asks about Phyllis, and Billy reveals she’s moving on with Nick. He knows he brought this about himself, 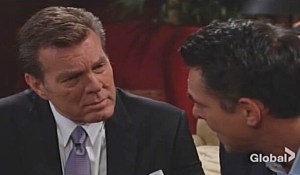 and recalls Jack advising him that lashing out at Phyllis would come back to bite him. Jack surmises she won’t forgive him for whatever he did out of revenge. Billy knows she still loves him – maybe she just needs more time. Jack advises Billy to let her go. Billy won’t give up. Jack suggests he drop over to see Victoria and his kids. Billy asks about Kerry, and urges Jack to get back out there.

At Dark Horse, Abby tells Nick about Billy wanting to go out the night before and she realized there’s no hot spot for young people once his bar closed. She wants to open a hip eatery 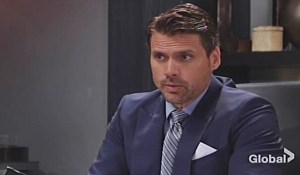 that turns into a bar after hours in her new building. Nick warns of the difficulties, and Abby wants him to guide her. He’s too busy, but suggests she put a strong business plan in place. Abby leaves, dejected, and complains to Arturo, who suggests other ideas for the space, but Abby is determined. She decides she knows just the person to help. Meanwhile, Nick is on the phone with Summer and vows to find her grandfather.

At Victoria’s house, Reed tells his mom and Nikki he wants to meet with Detective Rosales. Victoria insists they can fill him in. He wonders about an autopsy, and Vikki explains they never found his body. Reed, buoyed by this news, thinks maybe he’s alive and the police are wrong. They warn the authorities believe his body was moved. Reed asks who would do that? Nick arrives, greets Reed, and they all discuss Victor’s absence. Victoria cuts it off when Reed worries about Grandpa. After Reed and Nikki leave, Victoria tells Nick that Victor is Rey’s prime suspect…she thinks someone’s setting Dad up. Phyllis arrives and gets up to speed. Nick recalls Victor was mad enough to kill JT. Phyllis muses that it’s a possibility. Victoria argues the point. Nick has to go, and Victoria asks to pick Phyllis’s brain. After Nick’s gone, Phyllis tells Victoria that Victor being a suspect takes the heat off them. Victoria updates her on JT’s clothes showing up, and adds Nikki would never let Victor take the fall for something she did.

At the Club, Nikki confesses to Jack that she drank alcohol. 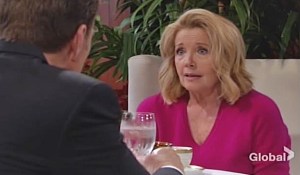 Jack asks what has her so stressed, and she explains the stables burned down, and Reed came home and is in pain over his father. She clucks that it’s breaking Victoria’s heart. Jack says Nick told him Victor is incommunicado, and complains about him worrying Nikki. She tells him this is different; he’d just hired Summer and then disappeared. Jack’s pleased she’s going to a meeting and will go with her. Nearby, Abby tells Arturo that she plans to pick Devon’s brain about her idea.

At Jabot, Phyllis worries Billy was avoiding her this morning. He assures her he wouldn’t do that. Phyllis is glad because she enjoys working together. She speaks in a professional tone about a press release she’s going to send him. Billy answers politely, then briskly exits.

Phyllis kisses Nick at home. He thanks her for backing him up about his father. Phyllis knows she’s right where she belongs.

At Dark Horse, Jack calls Kerry and sets up a date.

At Crimson Lights, Reed thanks Billy for meeting him, then asks if he thinks his dad’s really dead. Billy replies, “Unfortunately, I do.” He’s sorry, and knows what it’s like to lose your dad. Reed says it’s not the same. Billy advises him to mind his anger. Reed intends to find out who killed JT and make them pay.

Tessa Is Dumped in the Cold Woods by...

Reed Rages at Victoria for...