Tessa Is Dumped in the Cold Woods by Sharon, Nikki & Victoria

Monday December 10, 2018: Billy opens up to Jack, Phyllis worries about her deal, and Mariah has a change of heart. 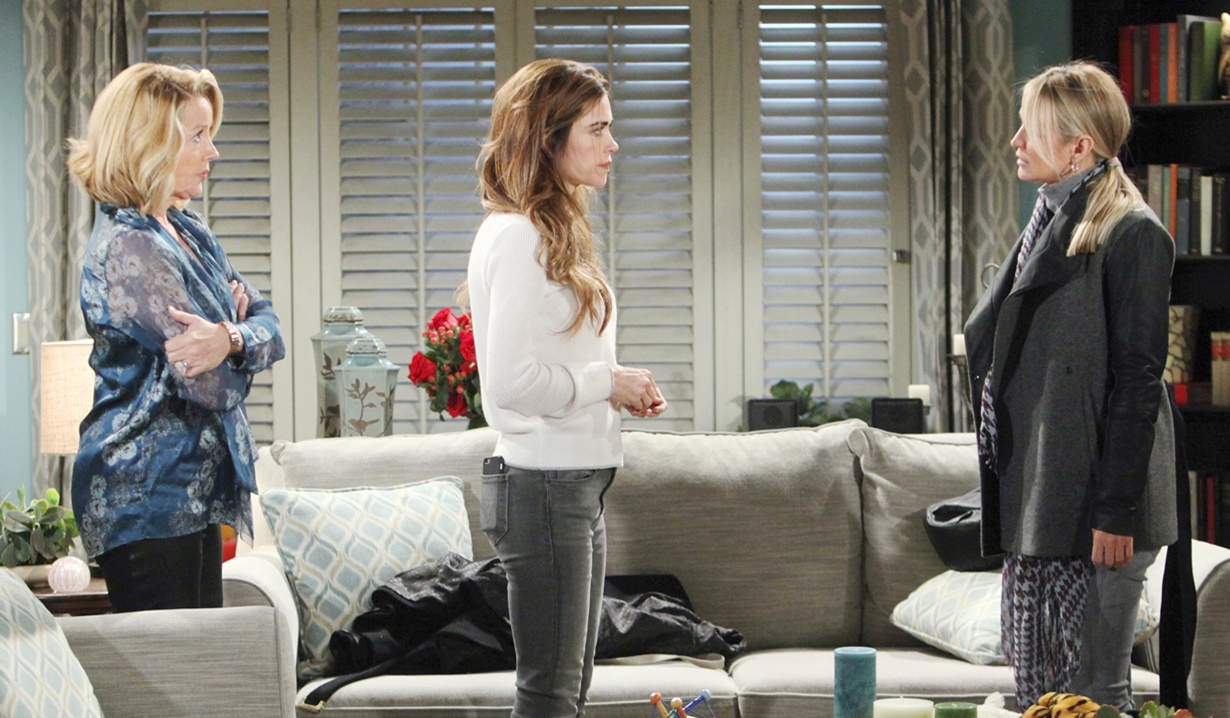 At Crimson Lights, Mariah texts Tessa, wondering if she’s coming to meet her. Lola joins her, and Mariah asks her to talk about something funny, so they discuss Kyle. Lola laughs about thinking he’s hot, and Mariah goes on about the important things, like trust, before admitting she’s waiting for Tessa to show up so she can break up with her. She alludes to being hurt too much even though no one’s touched her soul like Tessa. She regrets letting her wall down. Lola suggests they go for a drink, but Mariah opts out.

In the back seat of a car, head covered, Tessa begs, “Please, please! You don’t have to do this!” The car stops and Tessa cries that she gave them the money and Cristal was supposed to be safe – that was the deal. The bag over her head is removed, and she’s stunned to see Sharon, Victoria, and Nikki. Tessa sobs that she’s sorry about the blackmail as Victoria snarls that she warned her about messing with them. Nikki adds Tessa lived with her and with Sharon and knows the grounds of the ranch; she insinuated herself into their lives, and now it’s not about money, it’s personal. They grill her about how she moved JT’s body and the evidence she planted at the ranch to frame Victor for murder. 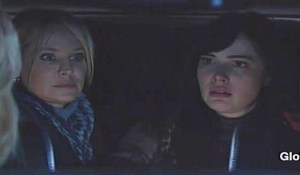 Tessa exclaims, “Do you think I have a death wish?” She just wants to live her life. They feel that’s exactly what a guilty person would say. Tessa keeps crying and protesting, but they’re unmoved. Sharon has Nikki and Victoria step out of the car. She doesn’t think Tessa knows anything. Nikki snaps that she’s a liar. They get back in the car and Nikki levels more accusations. Sharon asks her to stop and Tessa sobs denials. Victoria’s satisfied she’s innocent – they had to be sure. Nikki and Victoria elect to leave Tessa in the woods to find her own way back, despite Sharon’s complaint it’s freezing. As they leave, Sharon tells the Newman women they should be ashamed. In the woods, Tessa phones Mariah, who will come to get her.

At the Ashby house, Charlie’s showing Shauna his bare chest on a video call when Cane sneaks up and teases him. After, Charlie worries to his dad that Shauna will meet other guys and wants to go to Colorado to see her. Cane wants to get through the holidays and take it from there.

In Rebekah Barlow’s suite, she’s up close and flirting with Nick in her lingerie when Phyllis enters and shouts, 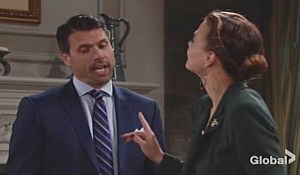 “No, no, no! That’s not happening!” Phyllis says this wasn’t part of the deal and blames herself. Nick says they had a nice dinner. Rebekah snaps, “Stellar.” Phyllis worries the deal is blown. Once dressed, Rebekah surprises Phyllis by signing the deal, since it’s a good one, and this was partly her fault too. After she leaves, Phyllis rambles reassurances to Nick, who is unbothered and hugs her. They banter, and Phyllis thanks him. Nick will go home and wait for her in bed while she goes to the office.

At the Abbott house, Jack asks Billy about the Barlow deal. Billy explains they’re close to signing and he and Phyllis worked together on the successful pitch. Jack wonders if the two of them are getting back together. 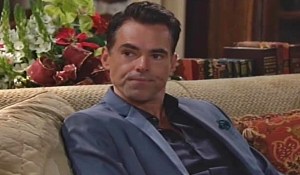 Billy admits they started clicking and ruminates that they’re not perfect; they screw up. He adds, “What if this is just another step in our dance?” Jack notes they were ready to kill each other, and that Phyllis is with Nick, but Billy dismisses that as a PR move; they’re not taking it seriously. He concedes he and Phyllis hurt each other badly, but they were good before, and that doesn’t go away. Jack notes the bad doesn’t go away either. Billy gets a text from Phyllis, who wants to meet.

At the Club, Billy’s happy about the deal, but he wants to go back to their earlier conversation about trying again. Phyllis notes she lied to Nick about going to the office, and instead, is there with him. Billy asks where they go now; he doesn’t want to discuss Nick, who is background noise to him. He wants to forget the other stuff and move forward. Phyllis notes that other stuff is Summer – she can’t take him back. Phyllis is with Nick now, and she’s sorry, but they’re done.

At Victoria’s, she tries to convince Nikki to spend the night there. Nikki will be fine at the ranch and assures her they’ll find out who’s behind this and put a stop to it soon.

Sharon, unsettled, sits at a table in Crimson Lights.

In the woods, Mariah finds Tessa, who cries in her arms. Once in Mariah’s car, Tessa sobs that she’s a terrible person and blackmailed the person who took her in. Mariah says she didn’t deserve to be dumped there by thugs. Tessa reveals it was Nikki and Victoria…they think she moved JT’s body. Mariah assures Tessa she’s not evil, but admits she was going to break it off with her tonight – but now she knows she needs her. They kiss.

At home, Nikki gets into bed in the dark, senses something, and turns on the light. She screams when she sees the pants and jacket JT was buried in beside her.

Phyllis keeps something from Nick.

There's an Abduction in Genoa City