There’s an Abduction in Genoa City

Friday December 7, 2018: Nikki struggles with an old demon, Devon strikes a deal, and Billy thinks Nick is cheating on Phyllis. 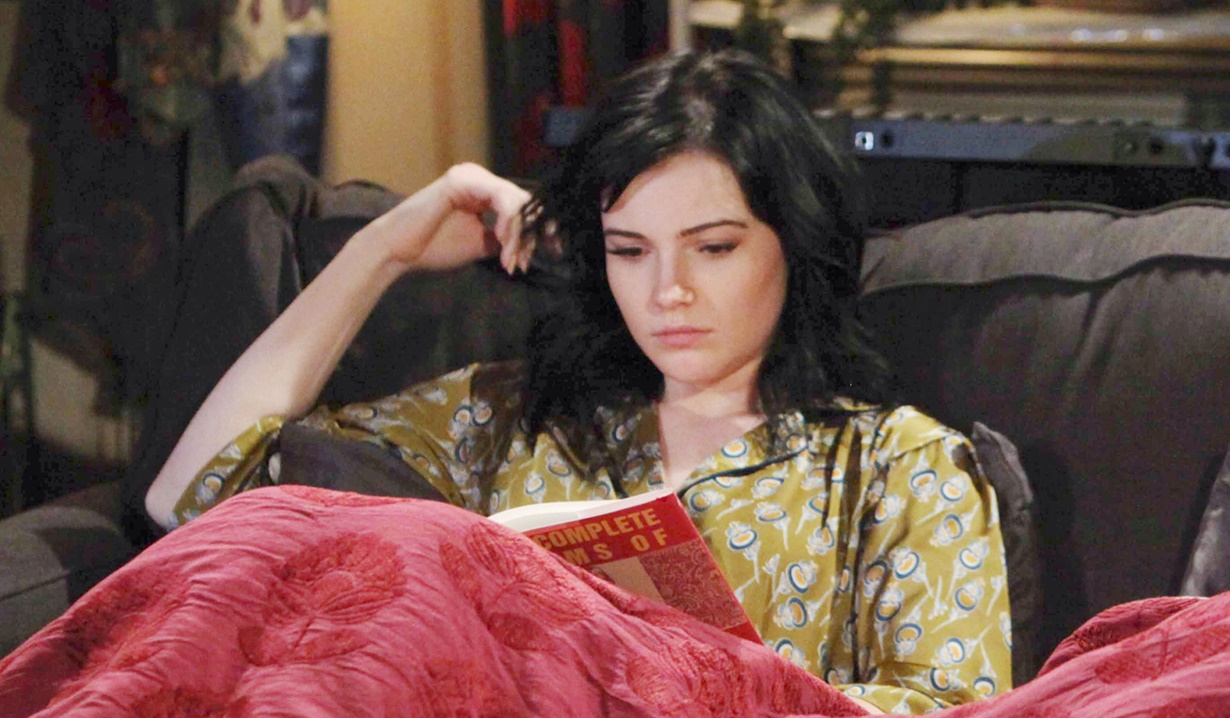 At Devon’s penthouse, he struggles to control his anxiety. While Rebecca Barlow listens to a recording by Renee, Ana pulls Devon aside and advises him to take his anti-anxiety medication. Devon resists, but takes a pill. It helps, and Devon rejoins Barlow to announce they’re arranging a video conference with Renee right now. Afterward, Barlow strikes a deal with Devon. Once alone, Ana and Devon discuss his medication – he tries to downplay the need for them. Ana states he had a panic attack. Devon admits it. He confesses he thought he could handle his grief, but things got away from him. Ana won’t back off. Devon says, “Please don’t.”

At the station, Victoria and Nikki argue with Rey, who wants to know – if they’re so positive Victor didn’t kill JT, then who did? Rey has Nikki exit, and Victoria warns he doesn’t intimidate her. Rey baits her about Victor going AWOL. Victoria doesn’t know where he is, and even if she did, wouldn’t tell him. Rey senses there’s something she’s not telling him. Rey butts heads with Nikki next, who is angry about him targeting Victor.

At home, Nick reacts to Phyllis asking him to go on a date with another woman by wondering if it’s a test – he’ll pass. Phyllis explains it’s Rebecca Barlow – they’re close to signing a deal, but she wants to have dinner with him to discuss the properties. Nick chuckles as Phyllis asks him to flash his killer smile to help her, and wants her to admit she’s pimping him out. Phyllis muses that Barlow could prove to be a useful contact, and reveals that she has no idea they’re a couple. Nick wonders whether to be insulted or flattered, but agrees to help. He’ll expect something in return…they start making out.

Tension remains between Mariah and Tessa at home. Mariah doesn’t know what will help, and says she has to go.

At Crimson Lights, Sharon’s surprised to hear Billy crow about how well he and Phyllis are working together. Billy assures Sharon he’s still there to lean on if she needs. Sharon wants to know if all he’s interested in is peacefully co-existing at work with Phyllis. Billy doesn’t want bitterness anymore and can’t hate her. 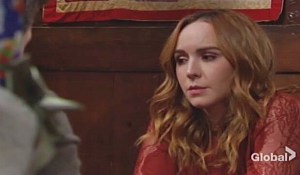 He admits he still cares about her. Sharon still cares for Nick too, but can never go back to him. Elsewhere, Mariah meets with Kyle and updates him on her difficulties with Tessa. He thinks it may be time to call it quits. Mariah can’t walk away because she’s scared to death…that she won’t find someone else. Kyle scoffs – she’s smart, funny, beautiful and real. Mariah realizes she has to break up with Tessa. Later, Rey happens by and Mariah alludes to having a bad day.

At Victoria’s house, Nikki’s overwrought about Victor’s disappearance, the gun and the bloody shirt. She rants, “Who is doing this?” Victoria replies it’s somebody who wants to get to them, and they can’t let them. She goes upstairs to text Sharon and Phyllis. Nikki eyes the alcohol and pours a glass of wine, 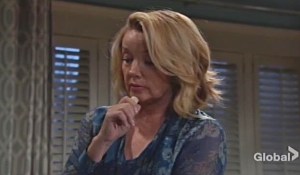 which she hides when Victoria returns. Sharon arrives, and they tell her Rey found a literal smoking gun. Sharon gets up to speed and wonders if Victor killed JT after they ‘thought’ they did. Victoria maintains Victor wouldn’t have left evidence behind, and Nikki considers Jack may be setting him up. Sharon decides it’s obvious who did it – the person who should be here with them. Nikki states, “Phyllis.” Sharon lays out her theory that Phyllis went back for the body and hid it. Nikki and Victoria deem it implausible. Sharon asks if not Phyllis, then who? Nikki can think of only one person. Victoria wants to put an end to this now.

At the Club, Nick chats to Rebecca Barlow about the properties, and she flirts. 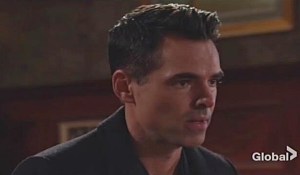 They compliment one another, and she hopes she’s not keeping him from a girlfriend. Nick replies that he’s where he wants to be. Billy arrives at the bar and notices the pair. At the table, Barlow tells Nick they’ll close the deal in her suite. Billy watches them leave together. In the suite, Barlow pours wine, spills it on herself, and changes into lingerie. Nick awkwardly urges her to sign the contracts. She purrs it can wait.

Billy arrives at Nick’s place and angrily informs Phyllis that Nick is already cheating on her. Phyllis laughs and explains Nick’s doing them a favor. Billy’s skeptical. Phyllis wonders about his concern and reminds him he bedded Summer. Billy regrets that, and still cares about Phyllis. She wonders if he’s asking her to get back together. They both decide he should leave.

Tessa leaves her apartment to meet Mariah, who texted her. She is locking the door when someone puts a black bag over her head from behind. Tessa screams and drops her keys.

Victor's the Prime Suspect in JT's...

Tessa Is Dumped in the Cold Woods by...