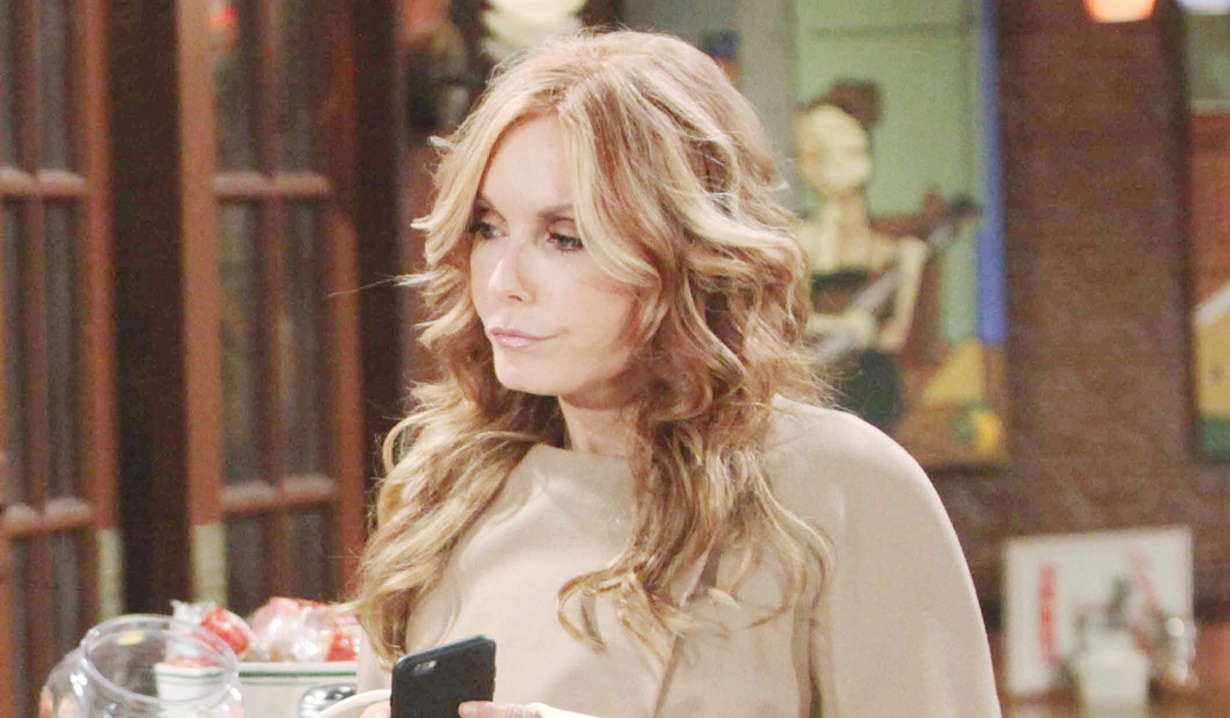 At Devon’s penthouse, he pleads with Shauna, “Please don’t go.” He explains Cane has no say and this is her home; she can stay as long as she likes. Shauna explains she misses her family; things were really good at Thanksgiving. Devon promised Hilary he’d take care of her and give her every opportunity life has to offer – he still wants to do that. Cane and Charlie arrive. Charlie hugs Shauna. In a moment alone, Charlie can’t believe this is happening. Shauna doesn’t want to break up. Charlie will update his data plan. In the kitchen, Devon accuses Cane of ripping the family apart. Charlie pulls Cane out to ask if Shauna could live with them if it doesn’t work out with her family. Cane declines, but agrees it sucks. Rejoining Devon, Cane reminds him drugs were found in his couch…what would Hilary think? 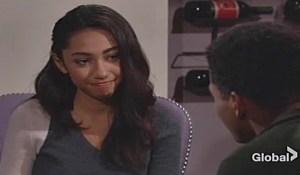 He advises Devon to let it go. Devon feels if she’s gone, another part of Hilary is gone. Cane advises there comes a time when he has to stop living life for Hilary. Devon feels he wants to erase her from his memory. When it’s time to go, Devon lets Shauna know she can call him day or night. Shauna cries that he gave her love and a home when she needed one, and urges him not to shut his family out. She assures him Hilary knows she’s okay, and wants him to be too. They embrace.

At the Club, Lauren’s telling Michael she’s attending Mia’s party tonight, but he’s distracted. He thinks the guy across the room looks like Fenmore. He turns, and Lauren gapes, “Fenmore?” It turns out their son’s been struggling with law school. Michael promises he can help, but Fenmore announces he’s leaving school to become a musician. 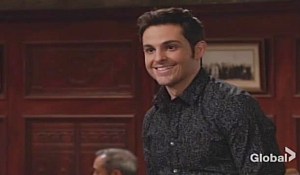 Lauren worries he’s in trouble with drugs or something, and Michael wants to know what this is all about. Fen says his heart’s not in law, but music. A girl he met convinced him to sing at a bar one night and he loved it. Michael rants about his impulsive decision, but Fen interrupts – he has a plan and budget…and will move back in with them. He’s hoping to get signed at Hamilton-Winters. Lauren recalls she was singing with Danny Romalotti at his age, and suggests they discuss it in the morning. Fen warns they won’t change his mind.

At Rey’s place, he helps Mia prepare for her party, and she talks about bringing the town’s most powerful people there and the need to win. She worries he doesn’t think she’ll succeed and asks for support. Rey reassures her as Lola arrives. Mia hopes she didn’t bring cheap napkins.

At Crimson Lights, Phyllis and Victoria confer with Sharon about Tessa. Sharon thinks they’re in the clear. Phyllis says they’d better be, or the singing barista will find herself six feet under 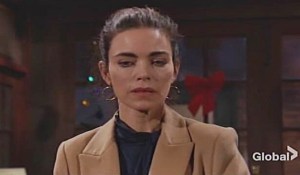 a sculpture of her own. Sharon speaks to Rey on the patio about Mia’s party. Sharon worries she’ll walk into some kind of trap. Rey explains Mia’s trying to get her business going and make friends. Victoria and Phyllis watch as Sharon says she doubts she can make it. After, they call her out on the tension between them. Talk turns to the party. Phyllis reveals she’s invited, as is Victoria. Phyllis feels it’s good to be chummy with Rey’s wife due to the investigation, but Sharon resists. Victoria agrees with Phyllis, they’re not safe since JT’s body’s still out there.

Victoria, Phyllis, and Sharon arrive at Mia’s party, where Mia enthuses that she’s read about Victoria for years and probably knows more about her than she knows about herself. After a time, Esther has arrived and Victoria and Phyllis debate cosmetics. Mia’s surprised Sharon came – hair and makeup doesn’t seem to be her thing. She offers her a makeover. Abby arrives in the same dress as Mia and wonders if she’s in a nightmare. Mia chuckles about her great taste, but Abby points out Mia’s is a knock-off. Vikki takes Abby aside and she concedes she may have gone too far. Vikki’s surprised she even came. Abby refuses to be intimidated and complains about 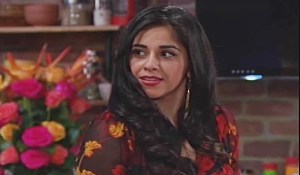 Mia playing the Rosales brothers. Nikki arrives, and Mia gushes before apologizing for the paint – she’ll have to talk to the lady who owns it about that. Nikki asks Mia about Rey’s investigation. Mia alludes to his late hours and chuckles to Esther that women like them have needs. The JT foursome whisper frustratedly in the kitchen area, while Abby tells Lola her food is better than sex. Mia chimes in that she must be doing it wrong. Abby assures her she and Arturo do fine. Lauren arrives, and Mia pitches a partnership with her and Jabot. Sharon gets involved and snaps at Mia when she gripes about Rey’s long hours again. The women squabble until Sharon walks out.

On the Crimson Lights patio, Rey asks Sharon what happened with her and Mia. Sharon will only say they’ll never be friends. Rey doesn’t know if he’ll ever be able to forgive Mia, but he’s trying. Sharon learns they’re not having sex. He’s not sure if it’s because he’s picturing her with his brother, or picturing himself with…someone else. Rey moves closer and confides he’s losing the fight against his feelings for her. Mia and the other women appear. Mia says the party was a success, and takes Rey away. Nikki gets a call from the ranch and gasps, “What?” She tells Victoria the stables are on fire!

Devon Throws Cane Out, Then Suffers...