Devon Throws Cane Out, Then Suffers Shortness of Breath 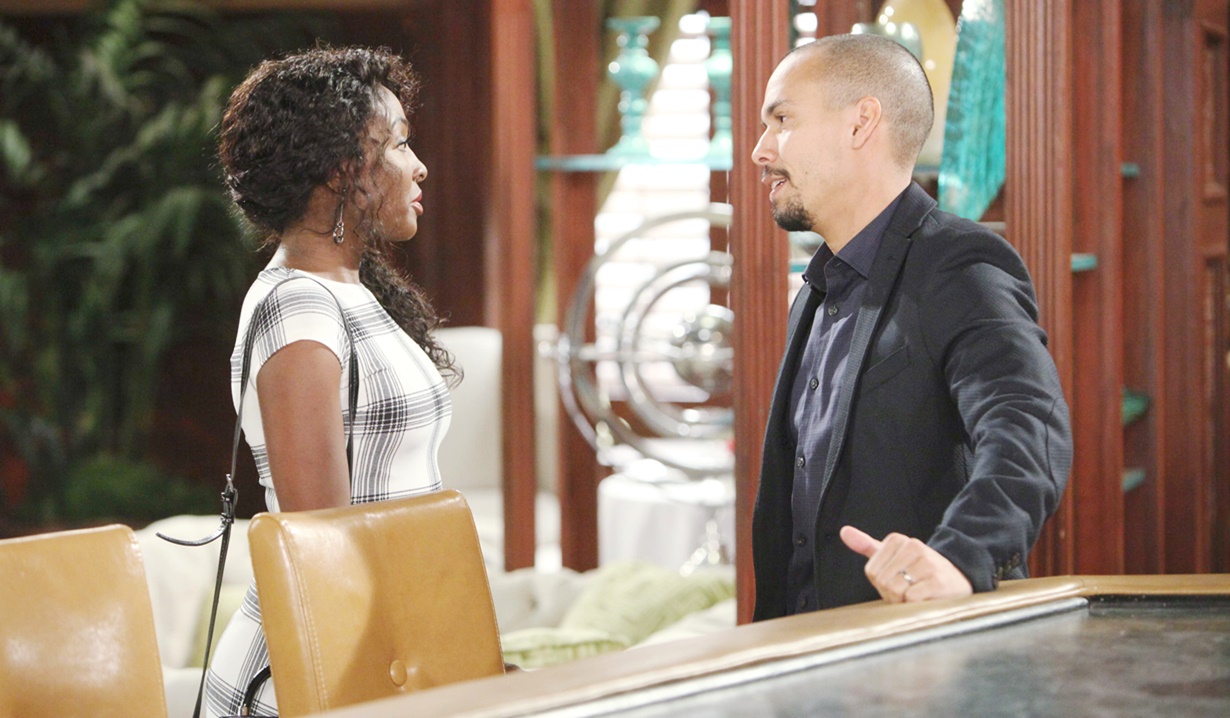 At home, Rey serves Mia breakfast and she admits she ordered last night’s dinner from the Athletic Club. She plans to go shopping for the apartment, so she can work and throw parties there. Rey teases about lowering the credit limit on his card. Later, she returns with bags full of items designed to impress even the Newmans – she wants to get to know influential people, including Abby, Nikki, Victoria, Phyllis, Lauren, and Esther of the Chancellor Estate…also Mariah and Sharon. Rey’s not entirely on board and Mia informs him she is doing this, and it’s ladies only.

At Dark Horse, Abby and Arturo kiss and enthuse about work. She reveals she’s about to go sign to buy the property she wanted. He thinks it’s great and tells her she’s the best as they discuss how she handled his past. Abby respects him too much to throw it all away over ancient history.

At Jabot, Billy tells Kyle he wants his help on a special project involving a collaboration with Rebecca Barlow. Kyle muses they’ll be heroes if they pull off this deal. Phyllis appears, and they pretend to discuss hockey. Phyllis calls Billy into the office and confronts him about hiding something with Kyle. He says she’s paranoid. Phyllis next meets with Kerry and offers to take her out for drinks later. She warns Kerry that Billy and Kyle are conniving and Kerry reveals she heard Rebecca Barlow was meeting with Jabot representatives. Phyllis, suspicious, sends her to find out more. Later, Phyllis summons Billy and reveals she knows about the planned meeting with Rebecca Barlow, 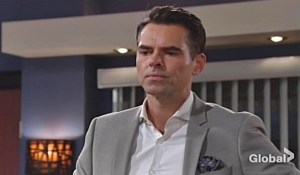 whose people were under the impression she was unavailable. She confronts him about keeping her in the dark and insists they’ll team up on the pitch. Billy relents and fills her in on how it could benefit Jaboutiques. Kyle enters, and Phyllis informs him Billy’s busy on the Rebecca Barlow pitch and to show himself out. After takeout and hours of work, Phyllis and Billy are grooving on a presentation and complimenting one another – they’re a dynamic team…professionally. After Phyllis leaves, Kyle joins Billy to complain. Billy assures him he’s Team Abbott all the way, he just has to be smart about it.

Ana wants to make Devon breakfast at the penthouse but he’s running late and reminds her not to ‘babysit’ him. Once alone, Ana finds a baggie containing pills and phones someone for help. Cane soon arrives. They debate if the drugs are Devon’s or Shauna’s. When Shauna comes home, she’s upset when Cane and Ana ask her about the drugs. She has no idea who they belong to, and the only person she’s had over is Charlie. Cane learns Devon’s 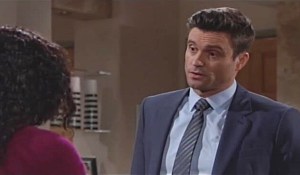 new friends have been coming over often and they’re ‘sketch’…she locks herself in her room, but hasn’t told Devon how she feels. Cane tells her to call him if needed, and she leaves. Ana worries about Devon’s reaction, and feels he wouldn’t use. Cane says having people around who do is reckless – the kids shouldn’t be exposed to this. He says, “Changes have to be made and I’m not asking Devon’s permission.”

At Crimson Lights, Abby encounters Devon, wearing shades, who updates her on Ana’s return. Abby talks about Arturo living with his sister, Lola, and he zones out. She notes he looks like he could use some sleep and something to eat.

When Devon returns home, Cane is waiting to talk. He pulls out the drugs. Devon figures they belong to some guy from the party. Cane reminds him this is where Shauna lives, and his son hangs out. He reveals Shauna doesn’t feel safe and is going back to Colorado. Devon says Shauna’s not going anywhere and orders Cane out. Devon experiences shortness of breath and holds his chest.

At the Abbott house, Abby gets a giant card from Arturo saying he’s so proud of her, along with a bottle of wine. He appears, and Abby reveals she has a huge case of buyer’s remorse. She fills him in on her track record with the tech start-up/sex ring and laments she has no credibility. Arturo makes her feel much better by revealing he discovered they’re developing in that area – her new investment is about to shoot up in value! They toast and can’t wait to get started on the building.

At the Club, Phyllis brings up Jack, and Kerry alludes to him already being on her good side. They discuss Billy, who Phyllis admits is a marketing genius. Kerry begs off, and Nick texts to see if Phyllis is on her way home. Phyllis tells him not to wait up.

Phyllis rejoins Billy at Jabot. They get in proximity, and Billy admits he enjoys working with her.

Lauren and Michael are stunned when Fenmore, (played by Zach Tinker), returns to Genoa City.