Monday November 26, 2018: Sharon walks in on Nick and Phyllis, Rey opens up to Mia, and Jack tries to romance Kerry. 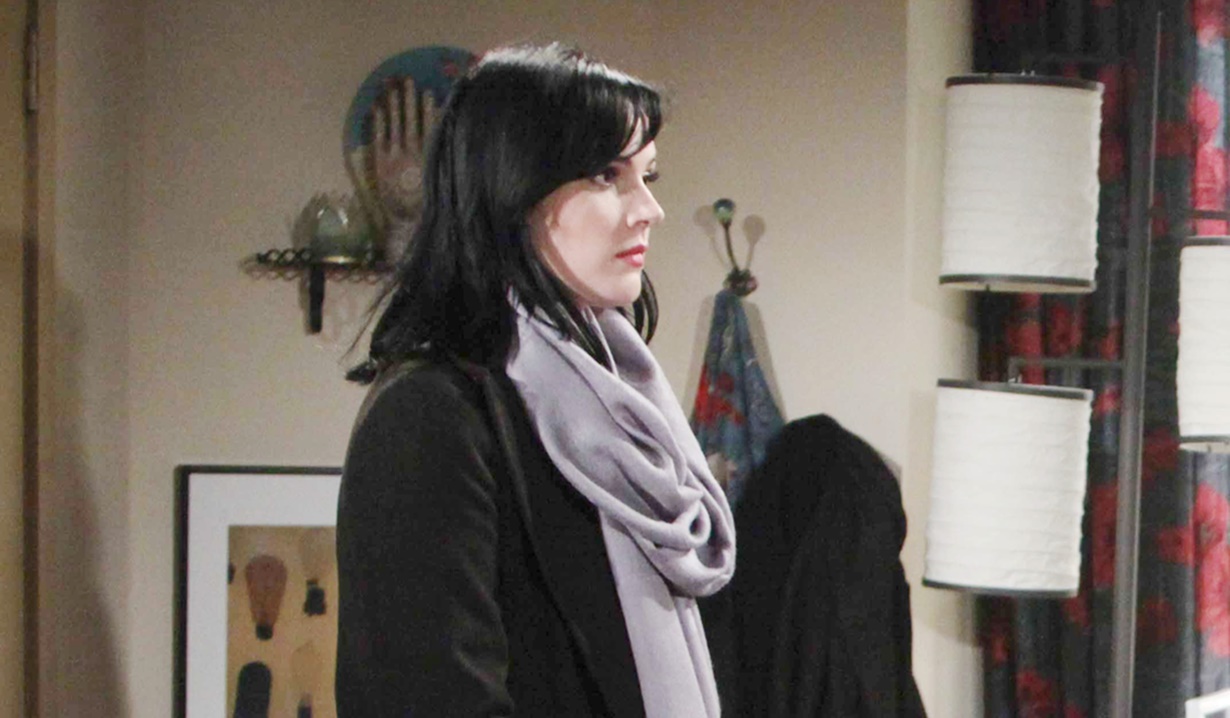 At Nick’s place, he updates Phyllis that Billy knows about her moving in. Phyllis isn’t interested in his reaction until she’s back at work…right now, she’s all Nick’s. They eat pie and decide to watch football before recalling the night they shared at Summer’s apartment. Nick and Phyllis decide they were being true to themselves, and start making out. After sex, Phyllis leaves the room in a t-shirt. The doorbell rings and Nick answers wearing just jeans – it’s Sharon looking for Faith’s book. Phyllis re-enters, talking about taking her things out of storage, and Sharon blurts, “You’re living here?” Sharon tells them to enjoy their housewarming and exits. Later, Nick’s tense and irritated as they discuss the situation while gaming. Phyllis asks if he’s having doubts about her living there. Nick assures her he’s all in, and over Sharon.

At Rey’s place, Mia stews and confronts him when he attempts to go to bed. She complains she gave up everything in Miami to come and give things another shot. He snaps, “With me or my brother?” Mia rants that she may have wanted to bring Arturo into it just a bit, to see Rey fight for her. 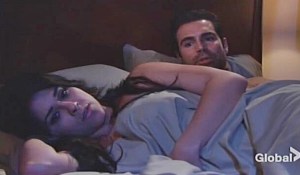 Rey grabs her and kisses her. In the bedroom, Rey’s stunned when Mia halts making love. Mia sulks that it has to be real – pounding the mattress won’t resolve their issues. Later, in the living room, she asks if he wants out of their marriage. Rey wants her, but he’s no good at this emotional stuff. He admits he’s afraid and questions if she still wants to be with his brother. Mia denies it. Rey is conflicted because of the past. Mia’s glad he’s opening up – they can fix her mistake. She regrets causing him pain and only wants to be with him. Mia promises Rey can trust her. They kiss and embrace.

At Tessa’s apartment, she claims to have no idea why Victoria’s there, but Vikki thinks she knows exactly why, and wants the truth from here on out. Tessa threatens to call the police, but Victoria’s certain she won’t – Victoria’s not committing a crime by dropping off a gift for Mariah, but Tessa’s guilty of felony blackmail. She advises Tessa if she cooperates, her position will improve. She suggests Tessa relocate – Mariah deserves better. If she sticks around, JT’s murder will be solved when the police charge an unexpected suspect with first degree murder. Tessa doubts Victoria could pin it on her, but Victoria muses her motive would have been money, like always. She recalls how she cozied up to Nikki, then Noah, and theorizes that JT was onto Tessa’s scheme and confronted her…and she killed him. Tessa argues, but Victoria points out she has no credibility compared to them. 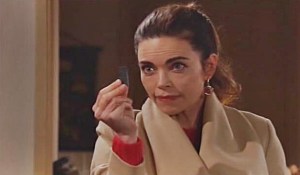 Tessa reveals she has footage that incriminates them, but Victoria had cameras installed in Tessa’s apartment and rips open the teddy bear, dumping out the cash and thumb drive. She holds up the thumb drive and glares at a stunned Tessa. Victoria advises she’ll also take the cash. Tessa asks what it will take. Victoria demands to know where the body is. Tessa, rattled, has no idea – her involvement begins and ends with the blackmail. Victoria warns she’d better be telling the truth, because as she’s seen, she’ll find out if she’s not.

At the Abbott manse, Jack shows off his wine nosing skills for Kerry in front of a crackling fire. They clink glasses and relax on the sofa. Soon, they’re talking the business side of the wine industry. Jack finds her fascinating, but Kerry insists her ‘story’ would put him to sleep. Jack persists. Kerry reveals she spent her childhood in boarding schools. Jack talks about holidays with his dad; and shares he was 15 years old when Dina left. Kerry’s parents divorced when she was age 10 – she was relieved. Talk turns to John’s many wives. Kerry muses about Jack sharing John’s penchant for romance and relationships. Jack asks about her history, and Kerry admits she’s never found ‘the one’. They toast to finding that elusive partner. They flirt and Jack runs for another bottle of wine. Kerry pulls out her phone, sighs, and texts someone. Jack returns to find Kerry missing and receives a text that she called for a car, having to work early.

At Victoria’s place, Sharon encounters Billy, who guesses she’s upset about Nick and Phyllis. Sharon doesn’t want to drag him down, but Billy is glad to have someone knowing how he feels. They agree their ‘shacking up’ happened too fast…and it hurts. Billy feels Nick and Phyllis lost the best things that ever happened to them. Sharon likes his positive angle. They’re hugging it out when Victoria returns. Sharon explains, and Billy asks about Victoria’s crisis at Newman. She glances at Sharon and replies, “It’s mostly handled.” Billy leaves, and Victoria warns Sharon they’ve another problem…Tessa claims she didn’t move JT’s body and she believes her. Sharon panics – who else knows their secret?