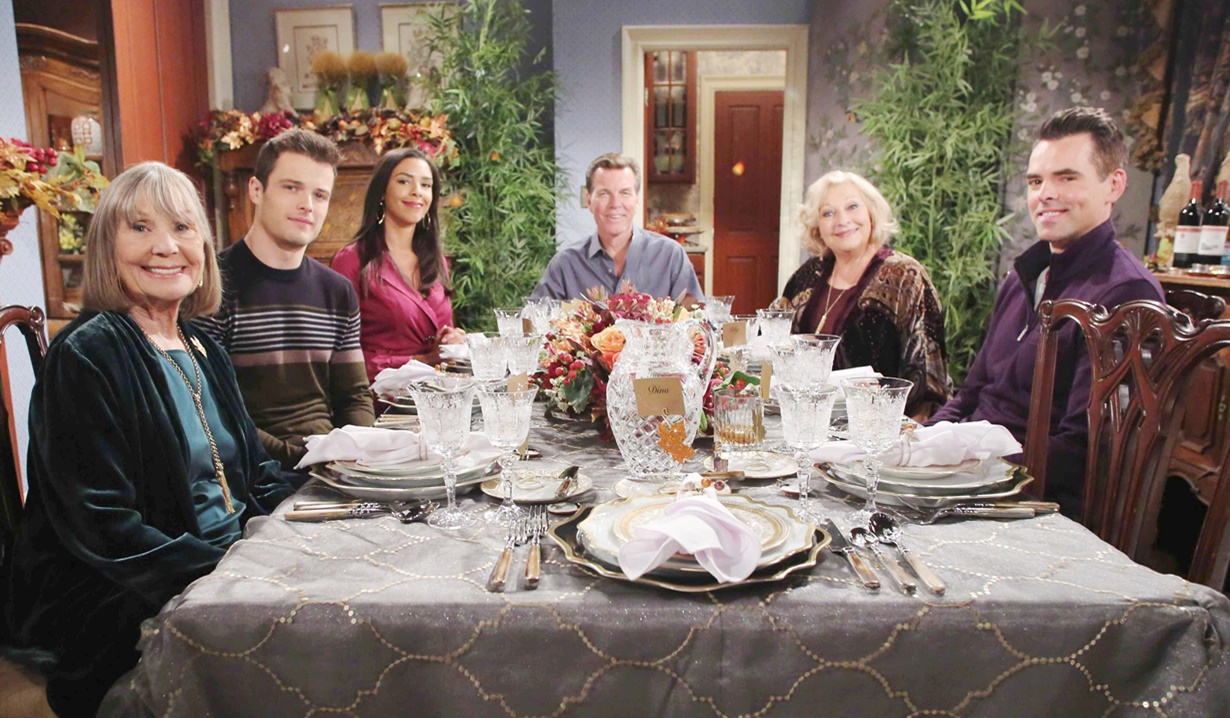 At Rey’s place, Lola and Mia bicker over who will cook. Lola insists she’ll look after the menu and complains about being in the same town with her brothers but Arturo not being able to suck it up and spend Thanksgiving with them. Mia urges her to get him there, no matter what. Lola calls, and Arturo agrees to come, but not without Abby. Lola texts Kyle, who would love to come, but has to be there for his dad.

At the Abbott house, Jack and Traci admire the Thanksgiving table, and Traci teases him about inviting Kerry. Abby, Kyle, and Billy enter. Abby realizes a place was set for Ashley. Jack hopes she’ll show up. Billy’s skeptical. The doorbell rings – it’s Kerry. Dina appears and snipes, “Get out of here, Missy. Go!” Arturo arrives and explains to Abby he wants her with him today. Abby gets her jacket…the look on Mia’s face will be better than dessert. Meanwhile, Kerry gets on Dina’s good side by recalling her business prowess when she ran Mergeron. Kyle tells Kerry she’s good with Dina, which is usually his claim to fame. In the dining room, Kerry gets the rundown on them all looking after Dina, and Jack’s invitation to Ashley.

At Nick’s house, Faith is downcast. Nick wonders if it has to do with Phyllis. Faith is used to Phyllis, at least she’s not some ‘rando’, and she didn’t expect him and her mother to last. She assures him Phyllis moving in isn’t a big deal.

At Victoria’s place, Rey is looking for Victor, but Nikki and Victoria insist he’s not there. Rey wonders what could keep Mr. Newman from his family on Thanksgiving. They explain he’s held up in Singapore and is not evading justice. After Rey leaves, Victoria and Nikki focus on Tessa. Vikki says the video proof is gone, but she can still talk. Nikki wonders how Victoria could stop anything from happening. Just then, Nick arrives with the kids. He learns Victor’s not coming and admits it’s weird without him there. The women insist he takes his business seriously. Nick argues he does too. Faith, with her cellphone, asks if Phyllis is coming since she and Nick are Genoa City’s next power couple. Billy arrives. Nick snarks, “No Thanksgiving plans with Sharon?” The men spar verbally. Billy notes Nick’s been more ‘up front’ about being a tool lately. Nick announces Phyllis moved in with him. Nikki’s appalled. Billy doesn’t care because unlike Nick, he’s over his ex.

Sharon welcomes Mariah and Tessa at Crimson Lights. Mariah announces she’s going away for a few days after Thanksgiving. Tessa remarks on how much it means for Sharon to serve food to the homeless today. 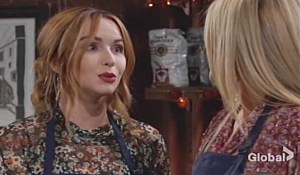 In a moment alone with Sharon, Mariah updates her on how difficult it is to keep up the façade with Tessa. Tessa rejoins them and ruminates about having so much to be thankful for this year. Sharon lists off her thanks, then the pair look to Mariah, who is thankful for love…and lattes. Mariah pulls Sharon aside to complain she can’t keep pretending with Tessa. Sharon is sorry Tessa hurt her, but doesn’t want Mariah to shut down again.

Rey arrives at home, followed closely by Arturo and Abby. 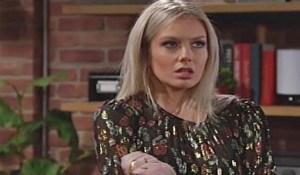 Arturo thought Rey would be working. Mia asks if he’ll storm off. Arturo and Rey get beer and Mia tells a peeved Abby to help her set the table. Lola and her brothers share stories as the meal preparation continues. As the conversation turns to Dark Horse, Rey learns Mia went there to see Arturo. Mia claims she told him she was with Rey. Snarking ensues. Lola decides they should go downstairs and orders them all to shut up and grab food.

Sharon’s surprised to see the Rosales family appear bearing a turkey and food dishes. She’s grateful for the help and encourages them to spread kindness to the patrons. In a moment alone, Mariah advises Abby as long as Arturo’s being honest, all the rest should fade away. Rey compliments Sharon on what’s she’s doing for the homeless as Mia watches jealously, then walks out. Arturo rejoins Abby and apologizes for Mia. She won’t let his ex ruin what they have. Arturo insists Mia is Rey’s problem. They kiss. Tessa slips her arm around Mariah before going to thank Sharon for supporting them. She vows not to hurt Mariah. After, Sharon texts someone ‘Tessa just left’. Nick brings the kids to Sharon, as Rey looks on.

Rey joins Mia in his apartment, and the woman complains about his interest in Sharon. Rey hollers that Arturo sat at his table. She blames Lola, and accuses Rey of wanting to keep punishing her. Rey counters that she takes any reason to run to Arturo. Mia asks him to give her a reason not to.

More: Y&R spoilers for next week

At the Abbott house, Traci, Kyle, and Kerry listen as Jack recalls Thanksgivings with John. Jack receives a text from Ashley, who says she couldn’t make it and attaches a press release for her line, which debuts in the spring. Kyle exclaims – there’s no way they’ll have a new line by then, but Kerry advises they’ll see her in the marketplace with Jabot’s all-new products. Jack has one more thing to be thankful for. When Traci takes Dina upstairs, Jack’s alone with Kerry and wants to share a bottle of wine.

At the Club, Kyle meets Lola to recap their dinners. He invites her to spend the weekend at the Abbott cabin. Lola balks; she has plans.

Someone is threatened by Victoria.