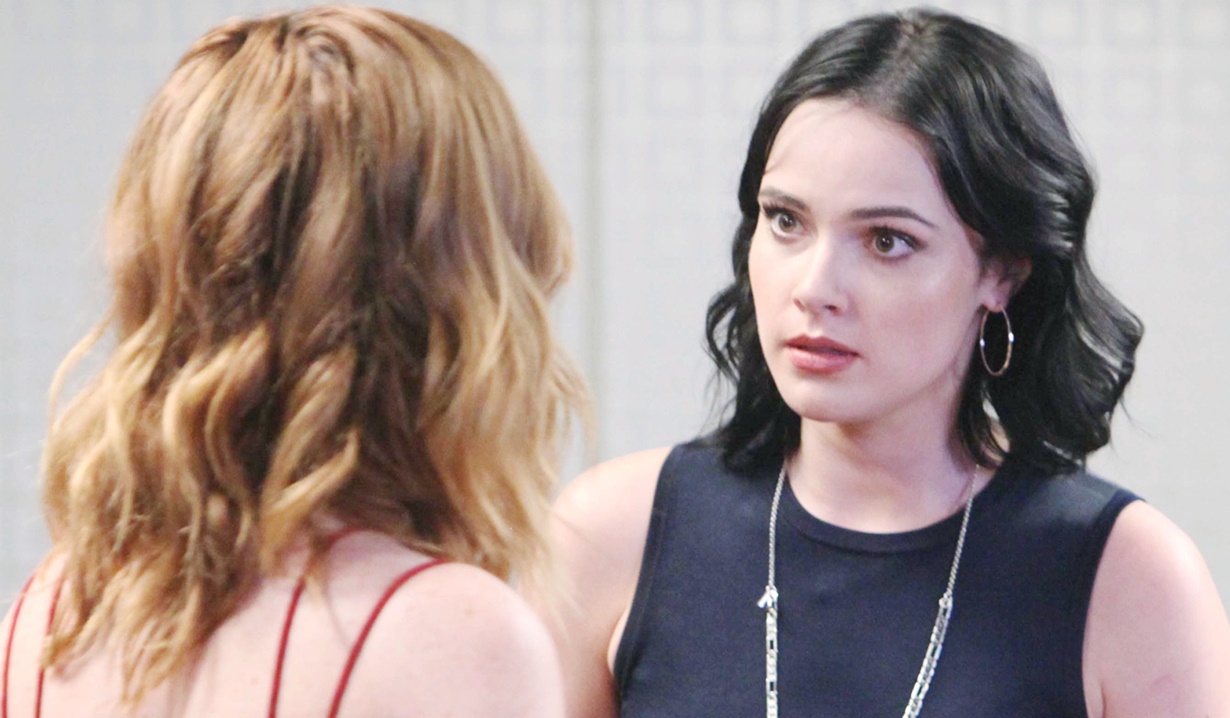 At Jabot, Lauren and Kerry join Phyllis and chide her for forgetting what they’re supposed to be doing today. Phyllis hollers for Ted and asks why she doesn’t know about the photo shoot today. Ted shows her the reminders. Phyllis scrambles to pull it together. Lauren reminds them the importance of promoting themselves as the new faces of Jabot, and Kerry gives Phyllis a pep talk about all she’s done already.

At the Club, Billy’s surprised to hear Sharon came there for coffee and asks if everything’s okay at Crimson Lights. Sharon insists she’s just checking out the coffee. Billy joins her, he’s in no hurry to see Phyllis. Sharon updates him about Nick and Phyllis sharing a latte the other day; they have to move on and be happy.

In Rey’s apartment, Mia catches her husband trying to sneak out and questions him. Rey claims he was letting her sleep in, and has to get to work. Mia grabs him around the middle and says, “I’ve missed you so much.” Rey’s missed her too, but has to go.

At Tessa’s place, she’s awakened by Mariah slamming her duffle bag on the bed. She asks what’s going on. Mariah angrily yanks out some cash and replies, “You tell me!” Tessa complains about Mariah touching her things. Mariah hollers it’s a big deal. Tessa warns she’ll ruin things, but Mariah needs to know what’s going on. Tessa begs her to let it go, and leaves.

At the station, Mia’s surprised to see Sharon working there. Sharon explains Rey’s in a meeting. Mia muses about Sharon being her husband’s landlord and partner. Sharon says she’s a victim liaison. Mia continues to question her. Sharon reveals she almost remarried her ex recently, so Mia talks about being separated from Rey. She needles Sharon about being a friend to her husband. When Rey appears, Mia greets him enthusiastically and mentions him getting his ‘friend’ Sharon a job. Mia leaves, but stops to watch them from a distance. Once alone, Rey tells Sharon things might have been very different last night if Mia hadn’t shown up. Sharon notes he has to fight for his marriage – she’s rooting for them.

At Crimson Lights, Tessa hides her bag and scrambles to get Lauren’s order right. Esther appears to help out. She hears Lauren on the phone trying unsuccessfully to line-up a make-up artist for Phyllis, and offers her services. Lauren stresses it’s an important shoot and she needs someone with editorial experience. Rey’s wife, Mia, appears and has the credentials Lauren’s looking for. She’s hired. Meanwhile, Tessa gets a text from Mariah asking to meet. Tessa agrees to meet at their apartment.

Mariah arrives at the apartment and informs Tessa she needs answers. Tessa starts in about Mariah following her, but Mariah corrects her and warns her not to make it seem like she did something wrong. She asks where Tessa got the money. Tessa claims she sold a song. Mariah questions her getting $230,000 for a song. Tessa goes on to say she paid off the smugglers. Mariah then knows she actually got $250,000 – she needs to know everything or she’s walking out and not coming back. Tessa claims she stole lyrics from Mariah’s journal again. Mariah demands to hear the song. Tessa can’t – she feels too bad. Mariah screams at her to stop lying, then cries about how hard she’s falling and not knowing what’s real and what’s not. Tessa insists they’re right together, but Mariah says it’s not enough. Tessa offers to give back the money and they can forget this, but Mariah can’t do that; moving in with her was a mistake. Tessa sobs that she loves her as Mariah packs. Mariah retorts, “If you really did, you’d tell me the truth.”

At Jabot, Lauren arrives and introduces Mia to Phyllis and Kerry. After Mia works her magic, Phyllis calls her a keeper. Billy arrives, and Phyllis introduces him as a bad boy. Billy’s dismayed to learn he’s not appearing in the shoot – it’s about powerful women. The shoot takes place, then Billy talks to Phyllis alone. He advises she can hate him all she wants personally, but she’s not going to push him out of Jabot. Billy wants credit for Jaboutiques. Phyllis says anyone can come up with a risky idea, but she’s bringing it to fruition and dragged Jabot out of the ditch he put them in. Billy thinks it’s payback for sleeping with Summer. Phyllis wants him to get back to work and warns she’ll be bringing a plus-one to the launch, he can bring whoever he likes.

At Rey’s place, Mia talks about breaking into the job scene in Genoa City. He’s glad she will be busy; so will he. Mia moves in close – it’s time to solve their problems. Rey feels sex isn’t the answer. Talk turns to Arturo living there. Rey asks if she’ll be able to keep her distance. Mia wants her husband back. Rey needs more time. Mia decides to go for coffee.

At the coffeehouse, Mia lets Sharon know she’s moving in with Rey and alludes to a ‘loud’ reunion happening tonight. She then says, “Rey’s mine. You want him bad, but you can’t have him. Back off, you understand?” Sharon understands.