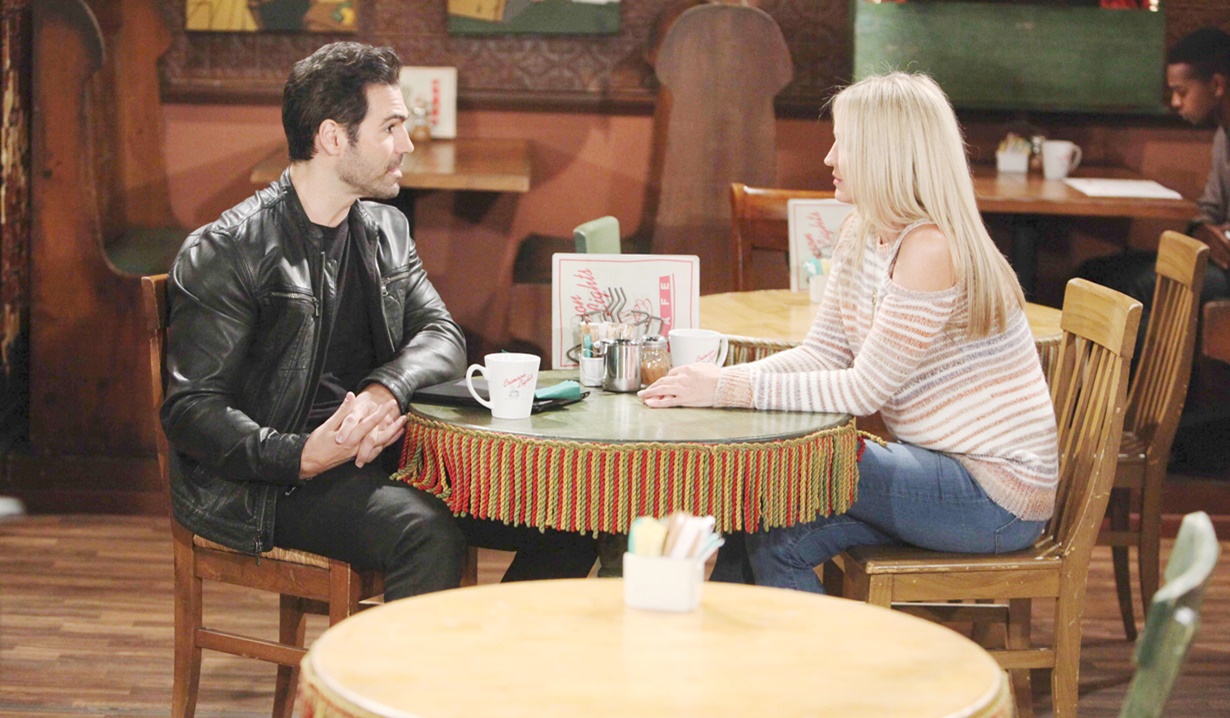 At Chancellor Park, Mariah reports an area of the park has been cordoned off by police but they don’t know what they’ve found, or what they’re looking for.

At Jabot, Phyllis texts Victoria to ask if she’s heard anything new. In reception, Lola appears with lunch for everyone. Kyle’s impressed. In the office, Phyllis reads that the police have remained silent about the crime scene. She gets a text from Victoria that no news is good news. After, Phyllis complains about Kyle not progressing on his assignment. Lola appears and hands Phyllis a sandwich before leaving. Kyle texts her thanks for the save.

At the park, Victoria and Nikki eye the crime scene. Vikki informs her the repair crew found JT’s watch, Rey ended up with it,

and connected it to Mac. She urges her mother to hold it together. After Vikki leaves, Mariah approaches Nikki for a statement. Nikki says she’s in the dark. Rey appears, and tells Mariah he has no comment. He spots Nikki in her car, and advises he needs answers about who does the park’s landscaping and who designed the sculpture. Nikki fishes for more information on his investigation, but Rey can’t divulge anything.

At the station, Sharon spots a woman who looks like Nikki being booked and is rattled. She takes a call from Nikki,

who tells her Rey wants to know everything about the park. Sharon soothes that without a body there’s no murder. Nikki snaps, “Until one shows up!” She presses Sharon to get answers. Later, Mariah arrives, and Sharon realizes she’s looking for scoop. Rey arrives and Mariah asks about new developments. Rey says it’s too early for statements. Sharon and Rey step aside, and he confides they may have a significant lead and if there is even the slightest bit of evidence at the park his team will find it. Sharon breathes, “That’s great.”

At Crimson Lights, Tessa questions Phyllis getting coffee at Sharon’s establishment. Nick appears and they sit down. Phyllis tells him Billy and Summer know about them. Nick shrugs that it’s not scandalous; they’re consenting adults. He asks her out for dinner. Phyllis questions if she’s his rebound girl, and he assures her it wasn’t revenge sex. Phyllis admits she got

a kick out of telling Billy they had sex after what he did. Nick asks what he did. Phyllis says it’s not important. Sharon arrives and confronts them. Phyllis reminds her they all have dirt under their fingernails. Rey looks on as Sharon wishes heart break on Phyllis. Nick says they’ll leave, as Rey stands next to Sharon and warns Nick there’s nothing left to be said. On the patio, Kyle arrives and greets Tessa, explaining that he’s meeting Lola. She arrives and Kyle chats about her delicious samples before ruminating about Phyllis counting on his expertise. Lola assures him he doesn’t have to impress her. Kyle admits he didn’t get the big project on his own merit – Summer maneuvered it. Lola’s not intimidated by her any longer. Kyle croons, “Where have you been all my life?” Inside, Esther compliments Mariah on her show and offers to do a segment about her life and times with Mrs. C. Mariah stammers that she’ll get back to her as Tessa sends Esther off with a free coffee. Kyle and Lola appear – they saw Nick and Phyllis take off, and then Sharon and Rey. Mariah and Tessa fill them in. Lola hands out her new delivery menus. Mariah’s impressed, and Tessa offers her services. After, Kyle wants to invest in Lola’s business, but she refuses since it’s a conflict of interest; she doesn’t want his money and will make her own. Tessa spots them kissing and tells Mariah they’re such a cute couple. Inspired, Mariah decides to ask Tessa if she wants to live together.

In Rey’s apartment, he advises Sharon never to apologize for being passionate. She regrets letting them get under her skin. Rey doesn’t understand how people walk away from a promise to love forever. He thinks she should let go of old dreams and make room for new things…and people. After musing about relationships taking work, and needing a partner who brings out the best in you, Sharon labels him a romantic. She likes being there with him. They almost kiss, but Rey catches himself. He gets a call about a break in the case, and leaves Sharon exhaling.

At Dark Horse, Nick worries about his kids growing up watching Sharon at his throat. Phyllis advises him to protect himself and his kids, cut Sharon loose and give her what she wants.

At the park, Rey gives a press conference and reports that due to new evidence, the JT disappearance is now a murder investigation.

Mariah Moves in With Tessa, Who's...