Monday November 5, 2018: Sharon and Billy commiserate, Rey meets Kyle, and a discovery is made in Chancellor Park.

At Jabot, Kyle’s pacing while waiting for Phyllis…he has plans with Lola. She arrives and informs Kyle and Billy they’ll meet when it’s convenient for her, and they’re in for a long night. Phyllis outlines the plan to fill the shelves until Kerry has new products…she wants their boutiques to be a haven for women. She wants to work all night. Kyle protests that he has plans with Lola and can’t cancel. Phyllis snarks, but Kyle walks out. Billy points out Kyle’s in the rosy part of a new love, and she doesn’t know what love means.

At the Club, Nick updates Nikki that he and Sharon won’t be working things out. Nikki remarks on how upset Sharon was after she told him. Nick’s surprised she saw Sharon and asks what they were doing. Nikki assures him they weren’t fighting, and takes a call from Arturo. She says she’ll be right over with a check. After, Nikki tells Nick she has faith he’ll get past this and hugs him.

At the park, Arturo disconnects from Nikki and a watch sits nearby in the dirt. Nikki arrives, gives Arturo the check, and he walks her to her car.

More: Y&R spoilers on the JT investigation and more

At the station, Sharon complains to Rey about the breakroom food and suggests Lola bring her truck by twice a week. Rey notes Lola’s trying new recipes at his place tonight. Sharon accepts an invitation to join him there.

At Crimson Lights, Lola tells Tessa and Mariah that Kyle’s going to help her test sandwiches upstairs. They presume he’s meeting Rey, but she says he’s working and doesn’t know. Rey appears and advises Lola he’s invited Sharon over to eat. Lola steps out to send a text. Sharon arrives, and Mariah questions what kind of message she’s sending Rey. Sharon decides she’ll cancel, and tells Rey she needs to keep things professional. Rey informs Lola, who sends another text. Inside, Sharon learns about Mariah’s romantic pumpkin, which she thinks is adorable. Billy arrives and chews to Sharon about Phyllis. Sharon compliments him on beating his gambling addiction and notes he’s in a better place now. He replies, “That’s what they say about dead people, Sharon.” Sharon maintains he’s decent and brave. Billy rants more about Phyllis. He concedes he’s cheated before, and doesn’t want to be a hypocrite, but he thought they were supposed to get wiser as they got older. Sharon indulges in the vent session about her nemesis. Billy asks why she’s in a charity thing with Phyllis. Sharon insists she made a commitment. Billy just can’t understand it. They go over past mistakes. Sharon notes she made one with Billy. He shrugs it off. Sharon believes she’s changed.

In Rey’s apartment, Lola buzzes Kyle up and warns he has to give actual opinions on the food. He gifts her with an apron that reads ‘Kiss the Cook’, puts it on her, and kisses her…as Rey enters. Rey muses the kid kissing his sister is also the kid who likes to dig up graves. Kyle explains his regretful actions. Despite her best efforts to get rid of Rey, it’s decided that Rey and Kyle will hang out while Lola creates. Rey decides to test Kyle with a hot pepper. Lola thinks it’s too much, but Kyle bites it. He coughs and sputters and Lola rushes over with milk while Rey smirks. As Kyle worries about passing out, Rey gets a call from the chief and leaves. Lola teases Kyle about committing suicide by pepper to impress her brother…now she’s afraid to kiss him. When he has to go, he kisses her quickly as she grins.

In the coffeehouse, Billy thanks Sharon for cluing him in about Phyllis and Nick. Rey appears. Sharon asks what’s up. He says, “JT Hellstrom.” He reveals that unless he finds him in the next week, they’re shutting him down. Sharon feigns disappointment; “That’s terrible news.”

At Jabot, Phyllis tries to reach Summer to return to the office, but gets no answer. She calls someone else and asks, “What do you think about some burgers and fries?”

Phyllis arrives at Dark Horse with takeout for her and Nick. She admires his office and the view. Nick’s impressed that she’s in the ‘big chair’ at Jabot. Phyllis believes she’s hitting her stride. Nick’s fine with her confidence. Talk turns to Sharon blaming him for a night when they were on a break, and not appreciating his drive. She thinks Sharon made him into a fairy-tale prince in her mind…he’s ambitious, independent, and a force to be reckoned with. Phyllis adds, “If you want something, you grab it.” Nick jumps up and kisses her. He worries, “We can’t do this.” Phyllis thinks they’re more than capable actually, since they’ve nothing left to blow up, but elects to go back to work. Soon, she returns, Nick carries her into the office and they start kissing and undressing.

At the park, Arturo picks up the watch in the dirt. It’s engraved, ‘Love Mac’. 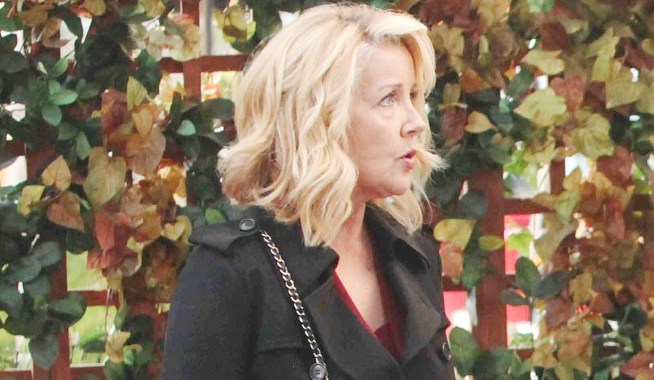 Cane Wants to Move His Family to Be Closer to Lily 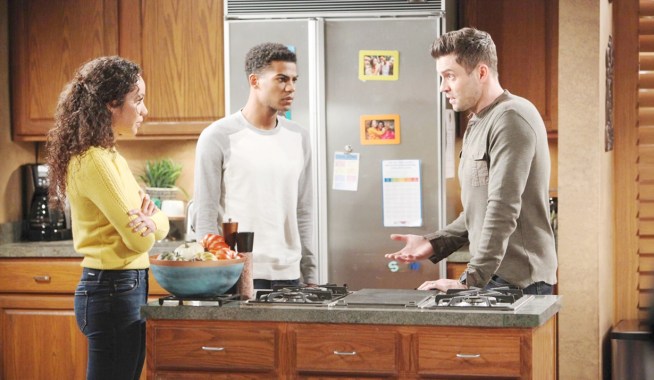