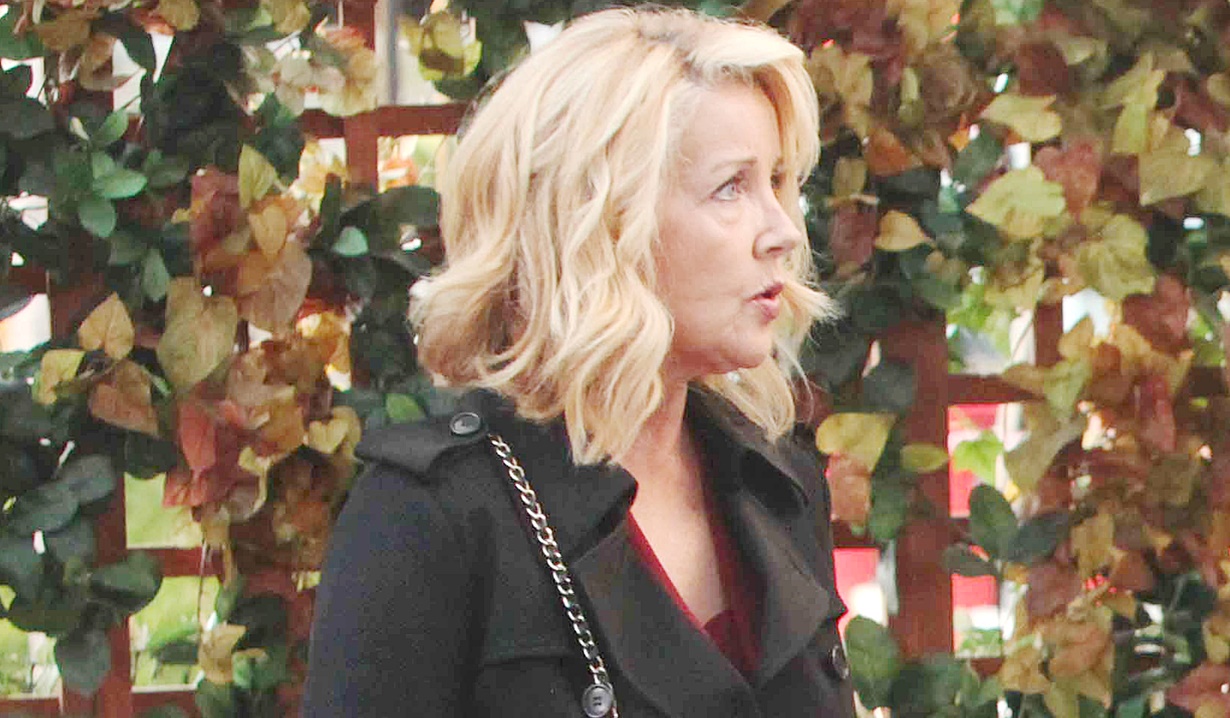 At Chancellor Park, Phyllis, Nikki, and Victoria are tired and crab about Sharon leaving the dirty work for them. They’re wondering if she’s turning them in to Rey Rosales when they hear a noise. A masked person appears, and the women scream. It’s Sharon. She reminds them they told her to blend in with Halloween and complains she was dealing with the mess Phyllis made. Phyllis tells her to dig and snaps that she and Nick ran into one another by chance the day she took her ring off. Sharon suggests Phyllis leave town with JT’s body…what’s keeping her here? Phyllis informs her she was elected CEO of Jabot. Nikki laughs but Victoria confirms it. Just then, Billy calls Victoria, who lies she’s at Newman Towers.

After, they brace themselves to look into the hole…it’s empty. Victoria asks, “Where’s JT?” Nikki breathes, “I have no idea.” Phyllis decides the corpse must have moved itself…and they just wired it a half a million cash. The women fret over what to do now. Victoria points out they have to put the dirt back. Phyllis says the good news is they don’t have to move a corpse, and Sharon says the bad news is whoever has the corpse is a bigger threat to them now.

At Dark Horse, Nick recalls Sharon telling him he needs to accept they’re over.

At Crimson Lights, Kyle tells Summer he and Lola had a fantastic Halloween…together. Summer snarks about Lola not sticking around and claims she’s been at a cooler party. Kyle’s skeptical. She needles him about her mom being his new boss, and predicts Lola will dump him.

At the Abbott mansion, Kyle wants to talk strategy with Billy. They argue whether Kyle is qualified to become COO. Kyle tells Billy as far as him being COO, that Jaboat sailed when he had sex with Phyllis’ daughter. Billy concedes the point. Kyle worries about the struggle facing the company. Billy advises him not to underestimate Phyllis, but adds her one weakness is her hatred for him.

At Jabot, Lauren admires Phyllis in the CEO chair. Phyllis frets about dropping the ball…she’ll need Lauren’s help. Lauren can’t wait to watch her kick enough ass to silence her opposition. Phyllis wants her to do more than watch. Summer arrives with plans to put her mother’s stamp on the office,

but Phyllis wants her to save her money and credit. Lauren thinks Summer’s onto something, so they start boxing things up, including Ashley’s Innovator of the Year award, the Abbott family photo, and the painting on the wall. Kyle and Billy enter. Billy expects she called a meeting to dump Jaboutiques. Phyllis reveals she’s expanding on them. Kyle offers his services as COO, and so does Billy. Phyllis has chosen a COO…Lauren. She goes on that Kyle will continue in his current role and she’d like Billy to resume his former position in marketing. He agrees. Lauren brings Kerry in, and Kyle

remarks on the new girl-power management style. Billy worries the Abbotts will be marginalized and Phyllis asks them not to be paranoid. Kyle leaves, followed by Billy, who is dispatched with the box of Abbott belongings. The ladies meet about the products they have to replace. Phyllis wants to fill shelf space with exclusive products from around the world in the meantime. Lauren decides it’s brilliant. Kerry confirms they’ll make new products reminiscent of Jabot favorites in a minimal amount of time.

At the coffee house, Sharon, Victoria, and Nikki discuss their dilemma. Victoria wonders if JT’s dedicating his life to getting revenge on them. They puzzle over how the body could have been removed with the heavy sculpture on top. Rey appears and guesses he’s interrupting another high-level charity meeting. He wants to join their cause. Nikki sniffs that there really isn’t much left to do. Rey asks what the charity actually is. They explain they’re collecting clothes for women in need, but blunder and have to cover. Sharon gets Rey to walk her to the car.

Abby questions Nick at Dark Horse…she senses something’s happened and Sharon’s involved. Nick admits he still loves her. Abby muses he did cheat, but Nick argues that one little mistake shouldn’t ruin everything. He plans to come up with a grand gesture, but Abby tells him to back off and give Sharon space. Nick’s frustrated…all the things he did were for her and their kids, he thought she would forgive him for the night with Phyllis.

At the station, Rey quizzes Sharon about leaving her Halloween party early. She shrugs that she and Nick got into it – she told him it was over. Rey thinks it’s a positive step, and offers his support if she needs it. Sharon rushes off to a meeting. Later, Sharon lets Rey know she’s not single and available. He offered support as a friend. She asks about his wife. He shares they’ve been talking and making progress.

At the Club, Kyle and Billy marvel that they can barely stand one another but have to work together to monitor Phyllis. Billy warns Kyle no playing dirty.

At Chancellor Park, Vikki tells Nikki she’s hoping to find some clue as to what happened to JT. Victoria suddenly feels she can’t be sure of anything…none of them can. They embrace.

Nick and Phyllis kiss in his office.