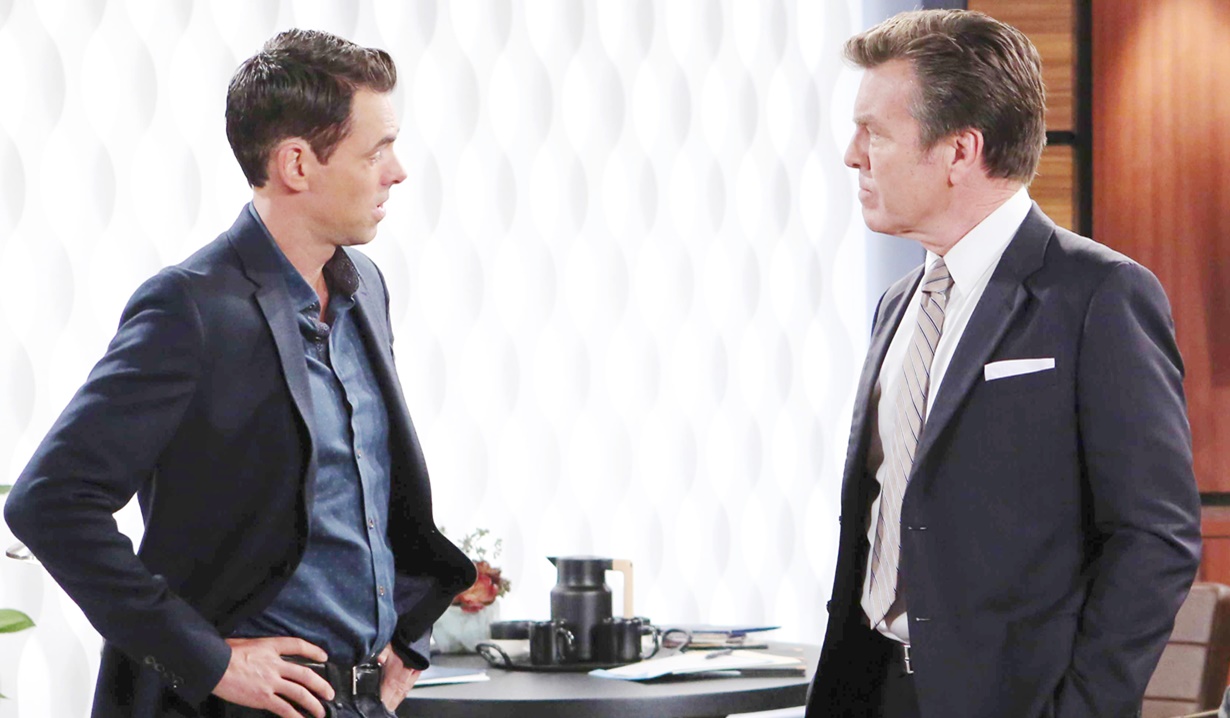 At Dark Horse, Arturo canoodles with Abby – he’s checking in since her mom left. Abby understands she had to do what’s right for her. They discuss Abby’s job. She likes being away from Jabot and Newman.

At Crimson Lights, Mariah and Tessa are sneaking a kiss while decorating when Rey appears. He questions Mariah about Sharon’s charity, but she can’t come up with anything. She encourages him to ask Sharon. After, Tessa joins Mariah and relays that Rey asked her the same thing a while ago.

At Newman Enterprises, Sharon meets with Nikki and Victoria about digging up JT; Phyllis is tied up at Jabot. Victoria thinks Phyllis was right it’s the only way. Nikki wonders if Victoria can do it. Vikki reflects that this was a man she loved, who will never have a chance to make amends or heal; he’ll always be the man who gave her Reed. She knows there was no other way in the moment, and marvels that a leaking pipe will bring them down. Nikki says it’s up to her whether they go ahead. Victoria feels they must.

At Jabot, Billy joins Phyllis in the elevator and they snark before falling silent. They join Kyle, Lauren, and Jack in reception, talking about who will be CEO. Phyllis and Lauren leave, and Ted the receptionist advises Billy there’s a pool on who will win, while Kyle tells Jack he’s the top contender. Jack knows he’s angling for the COO position. Kyle admits he wants to be his right hand, but also believes Jack’s the best man for the job. Jack muses that Billy has a lot to offer, and Phyllis should never be underestimated, then hints about tilting the scales in his own favor.

At Top of the Tower, Phyllis gets a text from Nikki. Lauren arrives and advises Phyllis to keep Fenmore’s as a priority if, and when, she becomes CEO. Phyllis vows if Lauren backs her today, she’ll look out for her interests. Lauren’s pleased at Phyllis’ confidence she can beat Billy and Jack. Later, Jack meets with a woman named Kerry Johnson, (played by Alice Hunter), who can replace Ashley in R&D. She considers his offer, notes he’s not CEO, turns him down, and walks off hoping they see each other again.

Kyle joins Summer at the Club and complains that thanks to her Lola believes he has too much baggage. He accuses her of wanting to tank him with Lola and playing head games to make herself feel better – it’s really sad. Summer, offended, thought they were friends. Kyle reveals he doesn’t hate her, but he doesn’t like her either. He warns her to leave him alone, and Lola too – he wants to be with her. Summer sniffs that he’s pitiful. Kyle admits he wanted Summer before, but he was wrong all along. When Summer stomps off, Lola appears. Kyle asks how long she’s been there. Lola replies, “Long enough.” Kyle’s hopeful. Lola kisses him, and tells him he has a shot, but he’ll still have to work for it.

At Newman, Nikki’s frustrated Phyllis still isn’t there, and updates Sharon and Victoria that she informed the city the park is her property and she will oversee the repairs. She arranged for Arturo to complete the project, so they have a window of time. They need a solution for where to relocate the body…tonight. Victoria suggests a lake or someplace quiet that will allow them to sleep at night. After Sharon leaves, Nikki tells Victoria they can do this without her. Just then, Arturo calls Nikki from the park – he has a problem.

At Jabot, Phyllis spars at Billy, who gets into the elevator to leave. She asks where he’s going, and he says it’s not her business.

At Crimson Lights, Billy meets with the same woman Jack met with, and he also makes her an offer. She informs him it’s not the right fit – she has other options right now. Later, Tessa gifts Mariah with a tattoo just before Sharon arrives. Mariah updates her on Rey’s questioning.

The board has assembled at Jabot when Kyle arrives apologetically. Billy makes his pitch to become CEO – he’s already vetting some top R&D possibilities, and Jack speaks next. He will protect John’s legacy and take the company forward. Phyllis calls him out for not having a plan to deal with the patent situation. She takes the floor and declares the company is screwed. She wants more women leading the way. Billy snarks she hasn’t said how she’ll deal with the patent debacle. Phyllis introduces Kerry Johnson, who will join the team only if she’s CEO. Billy cringes and Jack gapes. Nikki learns Arturo’s problem is Jill, who informs her the statue is not going anywhere. They spar verbally, and Jill announces she’s filing an injunction to have her own crew come in and deal with the problem. Nikki hisses, “You can’t do that!” Jill spits, “Watch me!” Arturo jumps in to say they think they can move the statue without damaging it. Jill agrees, but vows to supervise. Nikki will stay too.

At home, Lola updates Rey on the situation with Kyle. Rey warns sometimes what a guy says and what he feels are two different things, and advises, “Watch your back.”

Phyllis Wants to Be Jabot's CEO