Phyllis Wants to Be Jabot’s CEO

Tuesday October 30, 2018: Sharon agrees to join Nick for an outing, Nikki gets an upsetting call, and Phyllis decides JT must be dug up. 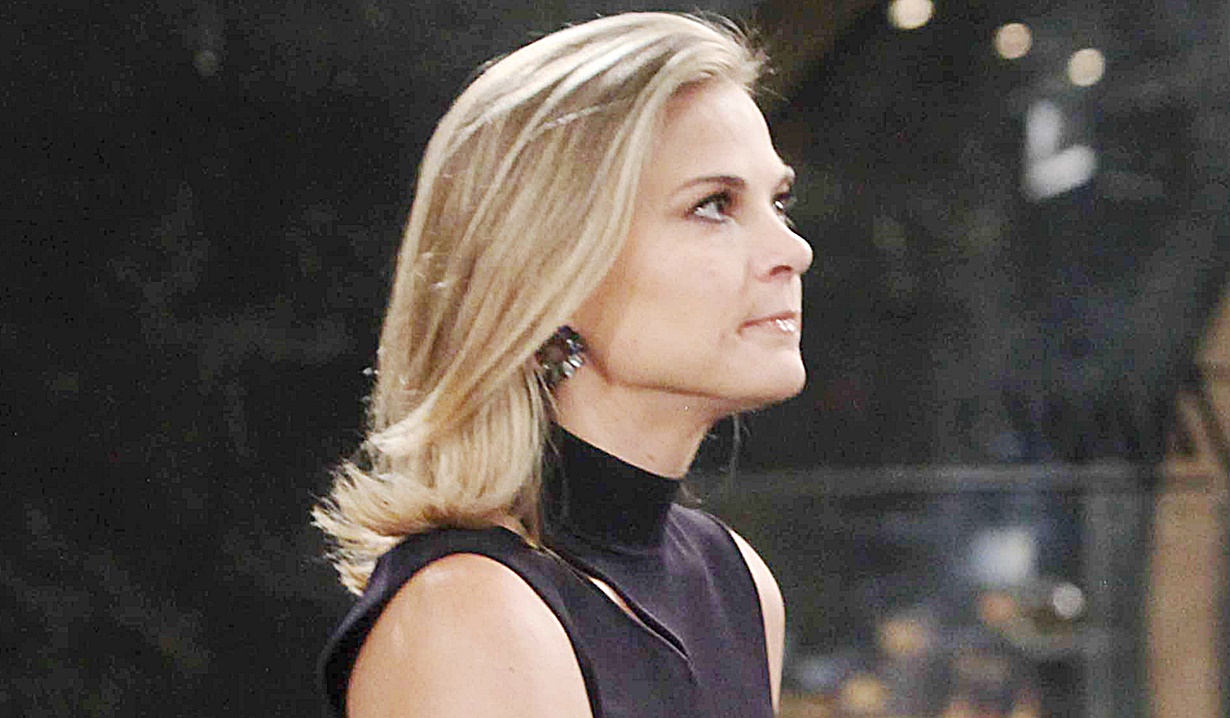 At the Abbott breakfast table, Jack confronts the tension surrounding Ashley’s departure. He believes they can face anything if they’re on the same team. Abby wishes they’d supported her mom more. Jack feels largely to blame, but Traci argues it was a group effort. Jack opines that they have to come together. Kyle and Billy agree to put their differences aside. They all toast to being ‘Team Abbott’.

At Jabot, Summer notices Phyllis dyed her hair red again before talk turns to Ashley’s departure. Phyllis thinks Fenmore’s is in a better position than Jabot, but when she sees crises, she sees opportunity. She tells Summer to ‘stay tuned’.

At Crimson Lights, Tessa and Mariah kiss before talk turns to Halloween. Mariah thinks it’s the best time of year. Nick arrives with Christian and Faith, who loves Halloween but doesn’t want to participate this year due to her parents’ split. Nick reassures her it will still be fun, but she’s unconvinced. Mariah let’s Faith know she’s always there for her as Nick and the kids leave. Lola appears, followed immediately by Kyle, who complains she hasn’t returned his messages. Lola needs two qualities in a man – honest and available. Kyle insists Summer’s just a friend – he’s moved on. Lola shows him what moving on looks like by walking away.

At the station, Rey watches Sharon on a call. After, Sharon tells Rey she’s frustrated she couldn’t help Devon, then invites him to the Halloween party at Crimson Lights. He teases she doesn’t want the grumpy upstairs neighbor calling in a noise complaint, but agrees. Suddenly, Rey realizes he’s late to meet Lola. Nick enters with the kids. Sharon’s happy to see Faith and Christian but warns Nick to call first next time. Sharon agrees to accompany them to the pumpkin patch when Faith asks.

At Crimson Lights, Mariah’s surprised to get a text from Sharon about the pumpkin patch and relays that Tessa’s invited too. They debate which car to take and Tessa worries about the guy who followed Mariah.

At Newman Enterprises, Nikki and Victoria feel encouraged that the blackmailer has made no more demands. Just then, Nikki gets a call. Distressed, she explains to Victoria that the parks department has to remove the statue where JT’s buried. She worries they’ll find him. Victoria can’t let that happen.

At Jabot, Jack notices Phyllis’ hair color as a meeting begins with Traci and Lauren. Billy arrives, and joins Jack and Traci in talking about presenting a united front. Billy defends Jaboutiques. Summer interrupts with a report and Billy snaps that it’s an executive meeting. Phyllis reminds him they all need to pull together. Traci wonders who should be the next CEO. Jack and Billy each think it should be them, but Phyllis says there’s a third candidate – her. Billy argues, and Phyllis points out he acts out when things don’t go his way. She makes a speech about what the company needs. Traci wants to table the discussion. After, Jack tells Phyllis she said some smart things and wishes her luck. Phyllis gets a text and leaves. Summer hears Jack and Billy agreeing that Phyllis has no chance to win the CEO seat. Summer thinks they’ll be surprised and warns it’s always a mistake to underestimate her mother.

More: Watch Jack give a warning about Phyllis

At the pumpkin patch, Nick takes photos of the kids with Sharon as Tessa and Mariah arrive. Next, Nick asks Mariah to take a photo, so he can jump in. Rey and Lola materialize, and Faith remarks she already feels she knows Rey since her mom talk about him so much. After, Tessa and Lola talk about Kyle while Nick tries to reminisce with Sharon. When he walks off, Mariah warns Sharon about letting Nick pressure her to reunite.

At the Abbott mansion, Traci and Abby discuss the possibility of Phyllis running Jabot. Abby thinks maybe it would be better for the family to stop grappling over the throne. Traci concurs.

At Crimson Lights, Lola confronts Kyle about his ego being fed by Summer’s attention. Kyle protests – he can’t get Lola out of his mind, and he misses her. Lola hints that he can give her a call…maybe she’ll be available, maybe she won’t.

At the station, Sharon admits to Rey she had fun at the pumpkin patch. Nikki arrives in a tizzy. Rey walks away, and Nikki informs Sharon they have a charity meeting. After they leave, Rey looks at his notepaper…he’s written ‘charity meeting?’.

At Dark Horse, Faith proposes to Nick that his company put on a haunted house. He agrees. Faith wonders if Sharon will invite Rey and wonders what he’d dress up as. Nick muses he’s the kind of guy who’d dress up as himself…whoever that is.

At Newman, Sharon, Nikki, Victoria and Phyllis debate what to do about the situation at the park. Phyllis decides they must dig up the body before it’s too late.

Jill proves to be a problem.

Phyllis Stuns Billy & Jack With Her...