Monday October 29, 2018: Devon turns to Sharon for help, and the Abbotts wonder what is next for Jabot as Ashley decides to leave. 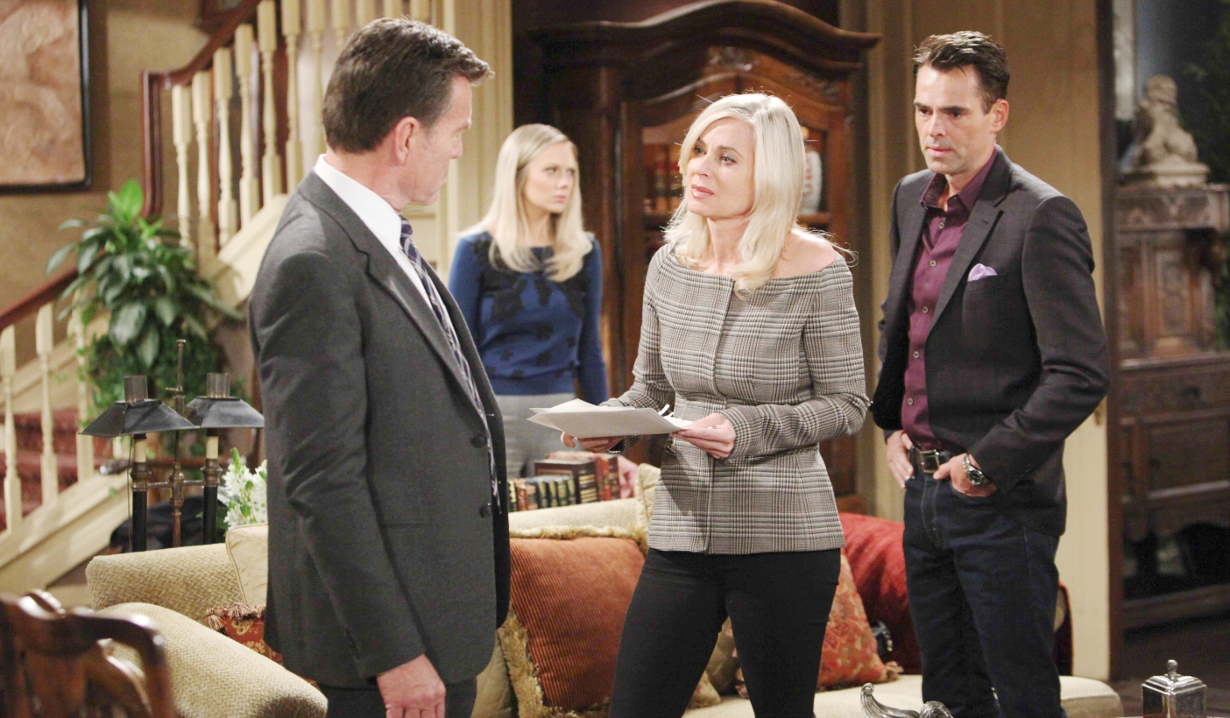 At Crimson Lights, Rey tells Sharon about his amazing new bed. He offers to give her a ride, but she turns him down.

At the Abbott estate, Ashley tells the family that she’s taking the patents and leaving Genoa City. She’s disgusted with them but not doing this out of spite. Billy points out that their offer would make her the richest Jabot employee in history and Kyle says she would leave the family with nothing. She’s starting her own company with her own products. She’ll call it My Beauty, just like John used to call her. Ash accuses them of always taking Jack’s side over hers. Jack says that if the family has looked to him for leadership, it’s because his father put him in that position when he was 15. He’s always stuck in there even while she’s left for company after company. They flash back to fighting as kids over cleaning up the pool. Back in the present, Ash says that they can’t make any offer she would take. She’s already booked a flight to Paris. She wants to build her empire in the same city her mom did. She’s made her peace with Dina so she’s sure she won’t miss her. Ash asks Abby to go with her, but she won’t pull up stakes. They hug and then Ashley tells Billy she hopes they can get past this one day. He doesn’t see that happening. Traci tells her sister that she loves her unconditionally, but she thinks she’s making the wrong choice. They hug. Dina comes in. Her daughter sits her down and explains that she left her something that has liberated her. Dina doesn’t want to think about that. Ashley gives her a hug and Dina files out. “I have nothing to say to you,” Ash tells Jack before she walks out. Left alone with Abby, Traci beats herself up for trying to mediate things with the family and only making everything fall apart. Traci sobs and wonders if she was wrong. Abby says you should never second-guess honesty. She also wanted to do right by Dina. Abby adds she caught Dina pacing and repeating to herself that she was a good mother. At the police station, Sharon tells Rey they need to establish boundaries, so he won’t get the wrong idea about them. Devon arrives and asks to speak to her in private. They go to a corner and he explains that Lily has been transferred to a prison a few hours away. He doesn’t think Lily can make it without her family visiting her all the time. Sharon says decisions like this are rarely reversed but she offers to call Lily’s case worker. She makes a call and then explains to Devon that she looked into placing Lily in a half-way house, but she doesn’t qualify. There’s nothing else she can do. Over at his desk, Rey takes notes about Sharon’s behavior. Later, he asks Sharon if she’s uncomfortable around him. She apologizes for snapping at him earlier, but she’s worried about how things look to Nick. Cane is with the kids in their kitchen. The kids worry about their mom. Cane insists that they write her a letter with pen and paper. That sounds very strange to the kids. Later, Devon drops by and talks to Cane about Lily and the kids. Devon assures him that his marriage is strong enough to survive this and he will do all he can to get Lily an early release. They hug. Billy and Kyle arrive at the Jabot office and try to figure out what to do with all the raw materials they are contracted to buy. They start bickering about Billy sleeping with Summer. Kyle complains about how Lola is cutting him out. Billy doesn’t care. They talk about John’s legacy and how Jack has been forced to live up to a family myth. Billy isn’t interested in discussing this. Ashley is at the Club. She gets a call from Neil and tells him she’s starting her own company in Paris. She’ll miss him and it would have been nice to see where their relationship could have gone. When she gets off the line, Jack chases her down. He hates himself for starting this war and what it’s done to their family, but if she cripples Jabot, she won’t just be hurting him but thousands of people. He admits that part of why the blood clause was added was so he wouldn’t have to compete against her. He’s deeply sorry. She hugs him. They flash back to when they were kids and she tells him she doesn’t like to fight with him. Back in the present, Ash refuses to change her mind. She needs to put herself first.

Jack goes home and thinks about his childhood. He sadly looks around the empty house.

Ashley flies out of Genoa City, raising a glass.

Nick won’t to give up on Sharon.

Phyllis Wants to Be Jabot's CEO