Friday October 26, 2018: Lily's family fight to prevent her being moved far away and the Abbotts make a final pitch to Ashley. 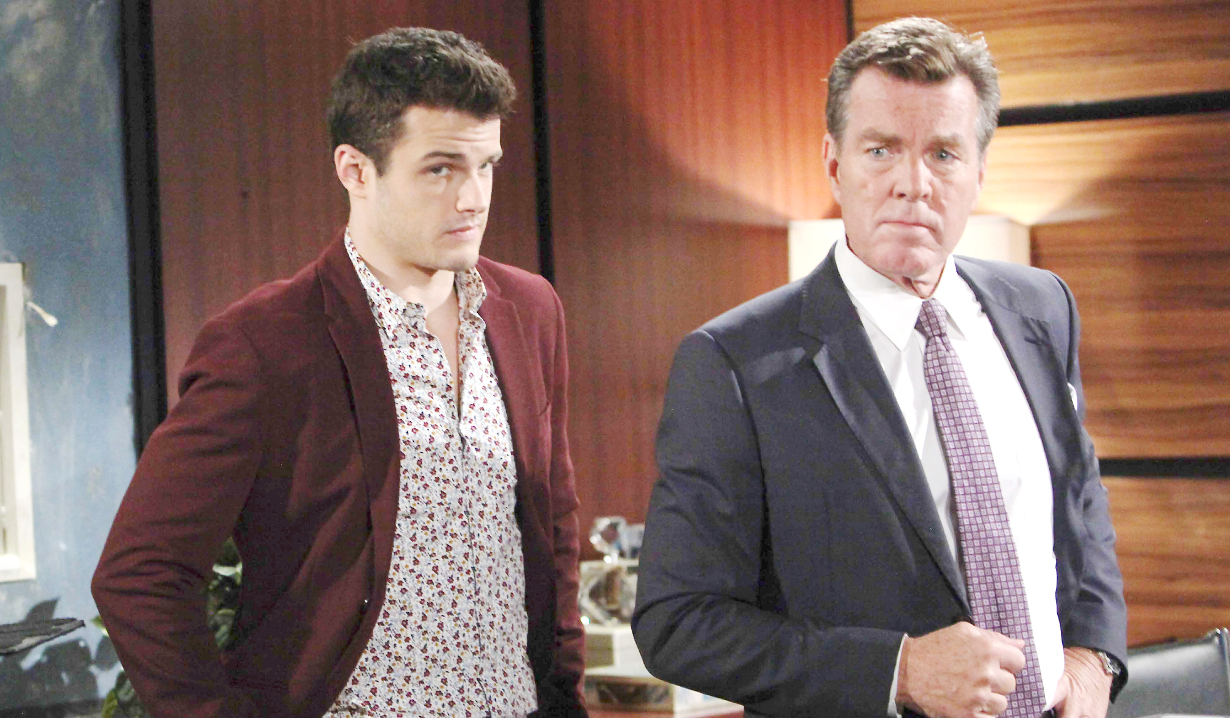 In the Abbott house in the 1970s, young Ashley tells John about her science experiments with soap. She thought that if she worked hard and won a ribbon at the science fair her mom would love her like she loved Jack, but she’s gone. Back in the present, Ashley sits with Dina in the Abbott parlor. Dina doesn’t know who she is. Abby listens as Ash tells Dina how she looked out for her with the patents. Dina doesn’t remember any of that. In another flashback, John assures Ashley that her mom didn’t leave because of her. As she cries, he promises to always be there for her as Jack and Traci eavesdrop. Later, Jack approaches his dad to talk about how sad losing his mom has been. John reminds him to be strong for his sisters. In the Jabot office, Jack and Billy argue about what to do about Ashley. Jack says they need to find some way to make her back down. Traci, Abby and Kyle join them. Bickering begins. They rehash John’s last years and Ashley’s complaints. Abby tells them about how much her mom always felt unloved. Traci says none of them are living up to John’s legacy and none of them should be running the company right now. Ashley joins them. Jack offers her a deal, including increased salary, royalties and so on. Ashley throws it back in their faces and accuses her brother of being willing to destroy the company for his own desire for power. Traci repeats that none of them should be CEO right now. Abby accuses her mom of going against everything John stood for. “Jack started it!” Ashley complains. The family assure her that they love and respect her. Ash keeps crying. She needs time to think and leaves. The family pace and Jack throws his hands up in frustration. He doesn’t know how things got this bad. Billy tries to be optimistic. Traci explains that Jack was left to hold the family together after Dina left. She cries as she talks about Jack buying Ash a cake when she won the science fair. He flashes back to when he and his sister were young and argued over her being John’s favorite. He worried that their dad wouldn’t always be able to be around to help her, so he promised that he would be there to help if she needed it. The Abbotts return to the house. Traci tells them how Jack used to look after everyone when they were growing up. That meant he couldn’t be the carefree boy he used to be. Jack downplays all of this, but Traci insists she saw how much attention John lavished on Ashley while Jack was left without anyone to comfort him. Jack admits he was jealous of his sisters. Ashley arrives and announces that she refuses to take a back seat to anyone. Jack refuses to change his mind about her being CEO. She turns down their offer and says she’s taking the patents and leaving the family, the company, and Genoa City behind. Cane arrives at the prison to visit Lily. Her transfer has gone through and she’s moving four hours away. She doesn’t know how she will survive being that far from her family. He promises to do all he can to stop this. She beats herself up for her mistakes. She asks him to tell the kids what’s going on.

At the penthouse, Devon tries calling Senator Palmer for a favor while Nate and Neil worry. When Devon gets the senator on the line, he suggests an early release or home arrest. He gets off the line and tells the others the senator will do his best. Nate calls to get an update from the prison physician about Lily. The senator calls Devon back.

At home, Cane tells the kids about the situation in the prison. Maddie and Charlie are eager to visit their mom. Cane and the kids go to the prison to visit Lily again. She tells them she’s moving after their visit. Lily assures them she will be safer there. Maddie offers to go to the media. Devon and Neil arrive to say that they didn’t have any luck with the senator. Cane tells his wife he loves her and she says that will help them get through this. Devon uses sign language to tell Lily he loves her. She sobs and tells her kids to take care of each other. “Remember the morning always comes after the night,” Lily tells them. Cane tells his wife he’s the luckiest man in the world and kisses her. A guard takes her away.

Jack tries to repair the damage in the Abbott family.