Thursday October 25, 2018: Lily has news about her future, Billy and Victoria discuss his revenge sex, and Nick apologizes to Sharon. 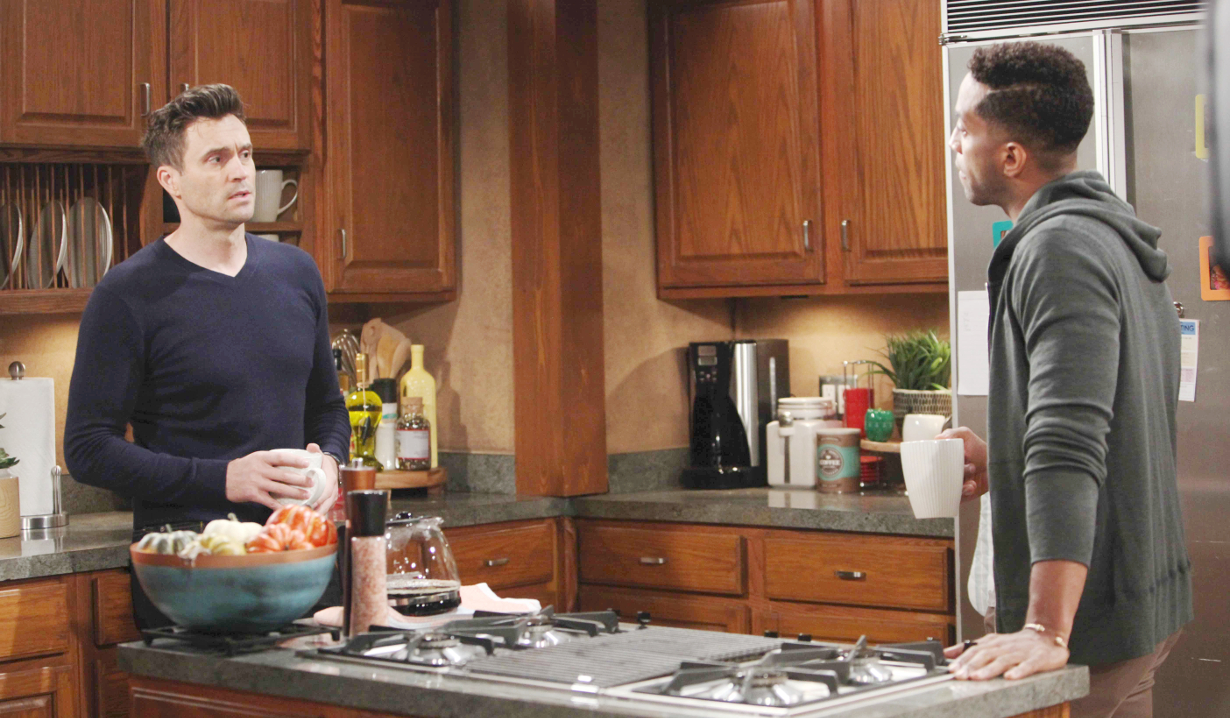 At home, Cane is on the phone to Michael, asking him to find a way to get him permission to see Lily. Nate answers the door to Neil, who says they are going to fix this situation today. Neil thinks they should head straight to the prison and act.

Cane and Neil arrive at the prison. Lily is shown in to see them and Cane hugs her. They talk about her stepping up for another prison and Lily assures them she’s safer in solitary. The warden wants to move her to a new prison. She’s being moved tomorrow. At the Abbott estate, the family tries to digest what the document handing the patent rights over to Ashley means. Kyle suggests something is wrong. Ashley insists that her mother never had any interest in her, not before and not now. Traci hands her the contract. Jack flashes back to arguing with Ash when they were kids after their mom left. Back in the present, Traci explains to Ashley that Dina had this contract written in the 1990s to make sure she was looked after. Ashley is in tears. The last time she saw Dina she said horrible things to her. She never would have asked for this. Kyle admits that he shredded the contract. Jack admits he shredded it with him for the good of the company. Ash accuses him of always taking things from her. Abby lectures Jack too. Ashley shoves the contract in Jack’s face and accuses him of thinking she’s garbage. Billy says what Jack did was stupid, but this could open a floodgate to employee claims. Traci lectures them for being shameful. Ash tells Jack he’s going to have to suck this up and accept it. Billy points out that they don’t know the legality of the document. Ashley thanks Traci and leaves to see her lawyers. Traci is sure that Ash just needs to process this, but Jack is sure that she’s just destroyed the family. That only enrages Traci, who keeps lecturing them for their schemes. Billy refuses to pick sides; he’s just worried about the company. Abby waves her arms at them and storms out. Jack thinks that Jabot is in a death spiral. Most of the family leaves Jack and Traci. He apologizes for what he said and wishes he had half of her faith in the family. She encourages him to just let Ashley have this. In tears, Traci talks about how this might have been planned to make them work together. They talk about when their mother left. She’s still upset that John used to call Ash ‘my beauty’. They flash back to when they were kids and Ash and Jack accidentally smashed a vase. Jack blamed Ash but John wasn’t angry.

Kyle finds Billy in his office at Jabot. They bicker and Billy storms off with a box of paperwork. At Crimson Lights, Sharon asks Victoria if the blackmail is over. Victoria doesn’t see that ever happening. She sits in the corner and watches Rey come in to get coffee. Sharon asks him out to a movie. He explains that he talked to Nick and doesn’t want to get between them. Sharon is not pleased and stomps off. Billy wanders in and bumps into Victoria. They talk about him having revenge sex to get back at Phyllis. She’s surprised he didn’t hit her up. He says it needed to be meaningless and it never would be with her. Victoria is glad he’s finished with his ‘combustible’ relationship and should look for something normal. He warns he’s going to outclass her with his Halloween costume. Nick and Arturo are having a business lunch at the Club. They talk about the business and how important family is. Nick quizzes him about Rey and Arturo assures him that he means well but can act extreme. Later, Abby joins Arturo and vents about her family being selfish and vindictive. She brings up his brother and Rey suddenly appears. Abby asks about his wife, but he refuses to discuss his marriage.

Sharon storms into Nick’s office and orders him to stay out of her life. He says he won’t stop worrying about her and still loves her. Nick promises to do better and he wonders if they can trick or treat together.

The Abbotts return to the estate, aside from Ashley. Jack has talked to the lawyers and the contract is sound. They have to sit down with Ashley and make a deal. Ashley arrives. “I wish I could patent the looks on your faces,” she says. Jack flashes back to John crying as he showed her the divorce papers from Dina. Jack wants to offer his sister an offer in line with what their parents would have wanted. Ashley doesn’t want money. She wants to be CEO.

Traci Forces Jack to Confess About...