Traci Forces Jack to Confess About the Contract

Wednesday October 24, 2018: Ashley tries to apologize to Billy, Cane is disturbed by what happened to Lily, and Traci gathers the Abbotts together. 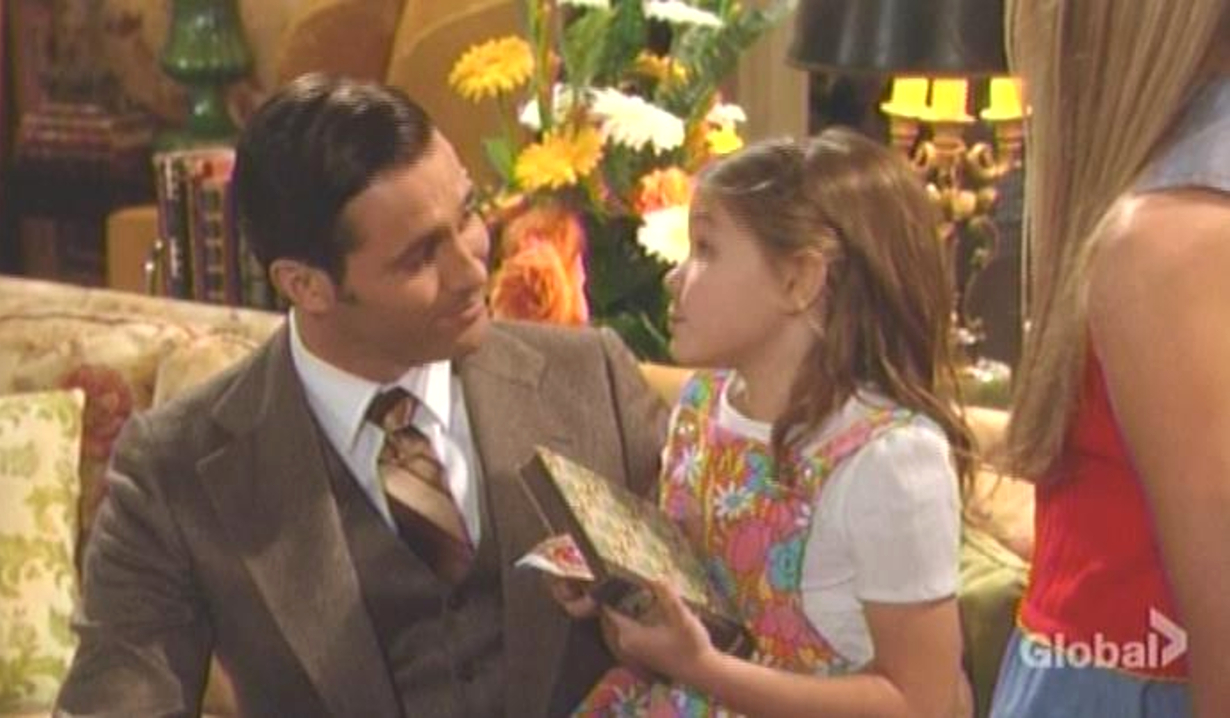 Billy is at the Club when Ashley joins him at the bar. He tries to fob her off, but she wants to talk. They sit down, and she apologizes for what happened with Kyle. She would have stopped him if she could. He can see she’s sorry but doesn’t accept her apology. They argue about how much she undermined him when he was CEO. She insists that she is the most qualified person to lead the company but still feels bad. He wonders if she’d be apologizing if her scheme had worked. She doesn’t answer. They get simultaneous texts and leave.

Traci sits in the parlor of the Abbott estate and stares over at the family photos. She flashes back to her childhood. A young John comes home and reveals his new convertible to Dina and the kids. He wants to take them all out to dinner and a movie. The kids are excited, but Dina announces she’s made her own plans. Ashley begs her to come but she won’t. Traci snaps out of the reverie when Kyle walks in. She tells him she’s feeling sick about the direction the family is headed. They talk about how much tension there is for Dina. Traci tells him how good he is with her. She starts quizzing about what he did with his grandmother yesterday. He squints and asks what Dina told her about it. They talk in circles and she suggests he’s hiding something. When he stops answering, she tells him not to text his dad to warn him. Jack arrives and asks what’s up. Abby jogs in, followed by Billy and Ashley. Traci asks everyone to take a seat. Kyle looks shifty. Ash and Billy are defensive, Traci assures them this isn’t another intervention. She wants to remind them all about what it means to be an Abbott because she’s worried about what will happen to them and Jabot. Traci says they need to go back to what happened when they were children and all the jealousy there was within the family. She flashes back to the new car again. Jack is annoyed when John lets Ashley pretend to drive the car first. Traci tells her siblings that Jack felt second best. To the chagrin of her siblings, she goes on about this and how her older siblings never let go of what happened. They talk more about the tension in the family before Dina left. Traci adds that Jack always had to work for his father’s approval and Ash had to work for her mom’s. They flash back to Jack complaining to Dina about not getting enough attention from his father. She tells him she needs to go away for a while, but everything will work out. Back in the present, Jack says he did the best he could for the family after his mom left. Traci lectures them all for fighting over John’s legacy. She says their father would demand they put the conflict behind them, so Dina can see the family at peace. They are supposed to be honest, fair and trust each other. She prompts Jack to tell everyone what he learned yesterday. They flash back again to John waiting for Dina to come home. Ash and Jack eavesdrop on them arguing. John tells her how agonizing things are and how she keeps pulling away. Dina admits she doesn’t want the life he’s given her. All he does is work and she needs more. In the present again, Jack explains that Dina was acting like it was the 1990s yesterday. She talked about wanting to protect Ashley and explains the contract that she made John sign which signed over all the patents she created to her. Everyone is shocked.

At home, Cane is flustered and Nate tells him how much he respects him for giving his wife some attention. Cane thanks him for helping out.

Cane and Nate sit in the waiting room at the prison. Cane paces and complains about how much he hates the place. Nate is happy that he can tell him this. They talk about the kids and how resilient they are. Sick of waiting, Cane demands to see his wife. Nate gets him to calm down and leaves to get some information. Soon, he returns with the warden. She explains there’s been an incident and Lily is a little shaken up. She’s being targeted by some inmates after having an argument with them. Cane stands up for his wife and rambles about how she is always fighting for justice and she’s not equipped to deal with this. The warden says he can’t see his wife until the situation has been reviewed. Cane protests but the warden insists that Lily is staying in isolation for her own protection.