Tuesday October 23, 2018: Abby tries to patch things up with Ashley, Cane pays Lily a visit, and Traci makes a discovery. 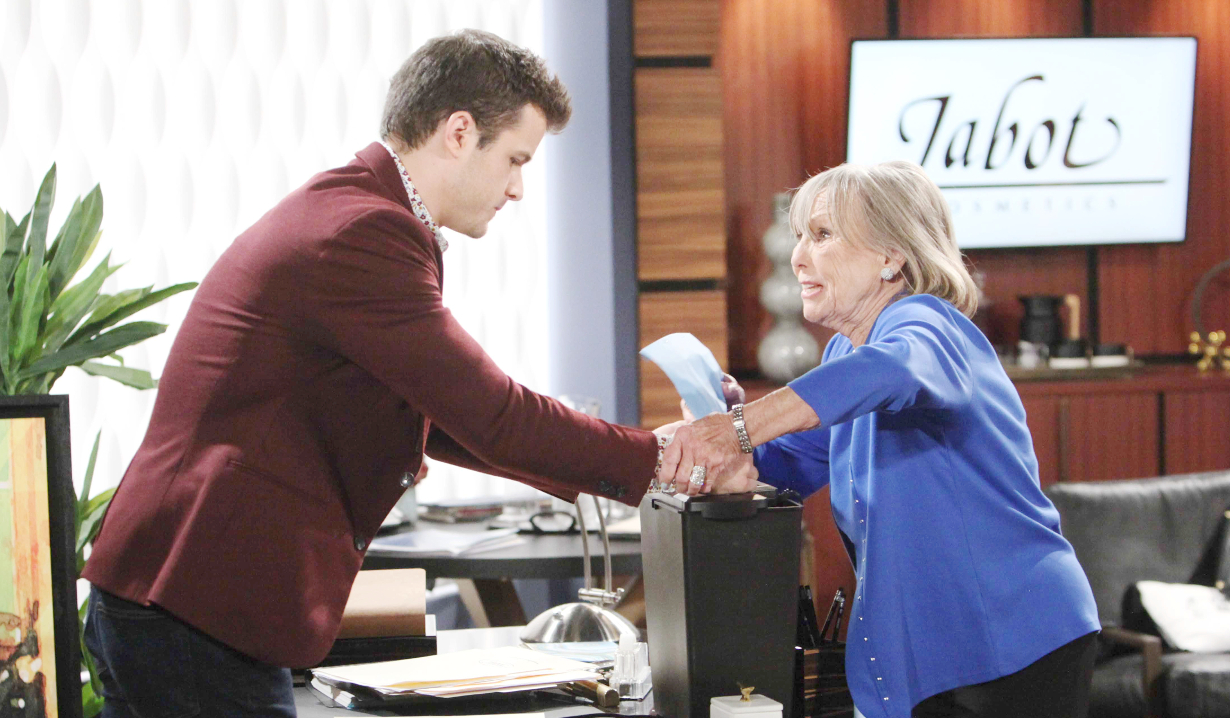 At home, Cane is on the phone, trying to make sure the kids are alright. Devon and Neil wait for him and Neil explains that Cane has been messing with Lily’s head and missing meetings. He grabs Cane’s phone away. Cane guesses Neil talked to Nate and admits that he’s felt beaten down but he’s trying to put that aside. Neil’s not sure he’s tough enough to deal with this. They try to reassure him that he can admit to his problems. They all miss Lily. Cane thanks them for their support. Lily is enjoying herself at the Club when she gets a text from Cane that he’s on his way. She snaps out of this fantasy and realizes she’s still locked up in her cell. She looks at cards from her kids and rubs the glitter off, so she can apply it to her eyelids with Vaseline. She goes to the visiting room where Devon and Cane are waiting. Cane apologizes for standing her up. They notice she’s wearing glitter and she tells them how it makes her feel human again. She tells them about getting used to life in prison and finding the right people to hang out with. Devon leaves them alone and they hold hands. He gets her to close her eyes and imagine they are out. She fantasizes about going to the Athletic Club with him. He tells her to remember this because they will make this a reality as soon as possible.

Abby runs into her mom at Crimson Lights. Ashley decides to leave immediately. At Jabot, Dina tries to stop Kyle as he is shredding documents. Jack walks in and demands to know what’s going on. Dina is disoriented, assuming that Jack is John and Kyle is her chauffeur. She talks about a signed contract in the safe. “The one for Ashley to protect her from Jack,” she explains. Kyle hands the document to him. Dina explains she’s worried Ash will be left behind while her siblings rise. She thought this would make things fair. Taking Kyle aside, Jack explains that the contract signs the patents of everything she designed for Jabot over to Ashley. The company would go bankrupt in a week if they honored it. Dina wants to lock the contract up again. Jack shuts the safe and tells her they can protect Ash better in another way. She believes him, but sobs as he shreds the contract. Meanwhile, Abby chases her mom down in the hall. She wants to talk. Before they can leave, they hear the shredding but leave anyway. At the Abbott estate, Dina goes to bed. Kyle explains himself to Jack, who never thought he’d be shredding a document of his father’s like this. Traci comes in and asks after Dina. Jack is sure the family has time to reflect and repair before addressing the CEO issue. He leaves for a meeting with Nick. Traci agrees that they can’t get carried away in appointing a new CEO. They chat about Lola and Traci tells him what a great catch he is. After he leaves, Dina comes down and tells Traci that ‘that boy’ is a liar. Tracy introduces herself and sits her down. Agitated, Dina tells her that John promised to help Ashley, but the plans changed, and the documents are gone. Now she doesn’t know if Ashley will get anything. She spots a photo of Ash but doesn’t recognize her. After she storms off, Traci runs out the door. Abby and Ashley go to the Club for a drink. Abby has been trying to see things from her perspective but she’s still in shock over what she did to Jack. Ashley explains she wasn’t just out for revenge, but to reassert her space in the family… and Abby’s place too. If Abby had known that, she would have told her to stop. Her mom tells her how rough things were with her mother and how much she resented her. She can’t bear the thought that Abby might feel the same way about her. Abby spots Jack at the bar and encourages her mom to talk to him. She gives her a hug and departs. Ashley approaches her brother and awkwardly mentions breakfast the other day. He doesn’t need explanations; he understands what part he played in pushing her to do what she did. He wants them to try and let the resentment go. If they can get past that, she would like that. Jack suggests they both stop working at Jabot for a while.

Traci sneaks into the Jabot office and empties the shredder. She glues the papers back together and gasps.

Traci Forces Jack to Confess About...