Friday October 19, 2018: Nick wants a favor from Abby, Sharon and Rey open up to one another, and Victoria and her group receive another message. 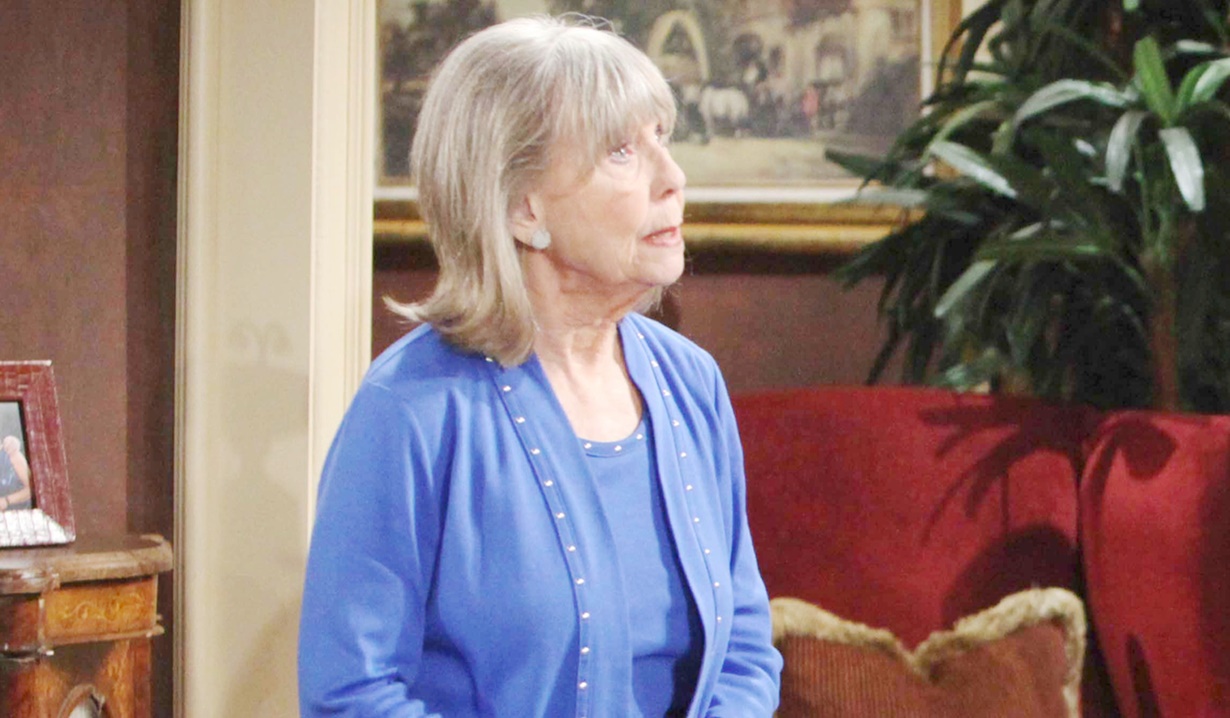 At the Abbott house, Abby tells Dina it’s Thursday and she enthuses about meeting Katherine and her poker group. Abby tells her they can’t make it today, and she has to go out. After, Ashley arrives and chats with Dina, who gets antsy when she mentions how much her children missed her when she was gone so long. Abby reappears and is short with Ashley before leaving. Dina snaps at Ashley, “Why did you upset that young girl?” Ashley announces she’s going upstairs to get her things and Dina protests only Abbotts are allowed up there – she’s calling the police – but doesn’t have a phone. Ashley reappears with a box of her mementos and Dina accuses her of stealing. Ash snaps, then sits in a chair and cries as Dina marvels at old photos. As she recalls good memories, Ashley throws up the bad ones to her. Dina cries that she can prove the idyllic family times existed as Ash storms out with the box. Later, Dina opens drawers and cupboards searching for something. Kyle arrives. Dina protests that she’s a good mother and is frantic to find something. Kyle deduces that she told John to put something in the safe for Ashley…at Jabot. Kyle suggests they take a drive.

On the Crimson Lights patio, Sharon wants Victoria’s opinion on how they handled the blackmailer. Vikki thinks they made the right choice and presses Sharon about Rey. Nick arrives. After Victoria goes, Sharon asks about Christian. Nick says he calls for her and misses Mariah and Faith. Sharon wants to be in Christian’s life, but not Nick’s. Rey enters, and Nick advises he’s interrupting, but Sharon wants to hear all about Rey’s new bed. He obliges as Nick simmers. When he’s had enough, Nick heads inside. He watches as Sharon goes with Rey to see his new mattress. Later, Ashley sits on the patio and is spotted by Victoria, who recommends running, and is shocked to hear she was voted out as CEO already – she thought she’d do anything to hold onto that. Ashley replies that she did, and her whole life fell apart as a result. Victoria understands what it feels like to have to prove you’re as qualified and deserving as your brother and muses the Abbotts dressed up as the Newmans for Halloween this year. Ash reflects that the Abbotts can be just as ruthless, and she was tired of being bullied. She senses Victoria’s been through something similar and asks if it was worth it. Vikki replies, “I hope so.” Once alone, Ashley gets up to leave, then sits back down again, seemingly torn.

At the Club, Arturo is with a distracted Lola. She explains Summer busted up her date with Kyle. Arturo relays how Summer once hit on him, causing trouble with Abby. Arturo tells Lola it’s obvious she’s upset despite her words. Abby joins them, and Lola goes. Abby complains to Arturo she hates her family. They go over the drama with her mother and Jack. Arturo can see both sides and asks what he can do. She doesn’t think there’s anything anyone can do.

At the police station, Sharon presents Rey with new sheets for his bed. He’s tickled. Talk turns to Nick. Sharon’s frustrated he wants to act like nothing’s changed. She feels like she’s turned a corner, however. Rey hopes it leads someplace good. After, Rey listens as Sharon makes a dinner date on the phone with Mariah. Sharon fills him in on Cassie and Mariah. Rey can’t imagine losing a child – he shares that his wife didn’t want kids, but he did. Sharon’s sympathetic, but gets a text and leaves abruptly.

At Dark Horse, Nick pulls Abby away from Arturo and asks about the bad blood between Rey and Arturo. Abby wonders why he’s interested, then realizes he wants information on Rey to spy on Sharon. Nick needs to know why Rosales is so interested in her. Abby sighs…she’ll see what she can do.

At Jabot, Dina asks where John is at, but Kyle reminds her they came to look for the safe. Dina indicates the safe is behind a panel in the wall. To his surprise, Kyle locates it, and Dina says the combination is her birthday. He opens it as Dina claps with glee.

At Newman Enterprises, Victoria concludes a call as Sharon barges in and tells her to check her email. Vikki finds an email with the subject line ‘We’re Not Through’ and Sharon relays that Nikki and Phyllis got it too. It indicates if they don’t pay the remainder of the money, the police will find out what’s buried underneath ‘here’. An attached photo shows the statue in Chancellor Park. They gasp.

Cane says he’d like to see his wife right now and a woman tells him it’s not possible.

Phyllis Smacks Billy for Having Sex...