At Jabot, Phyllis calls Billy and leaves him a voicemail – she’s glad he’s back and wants to talk; she won’t stop fighting for him.

At the Abbott house, Jack tells Dina his real father is John Abbott. Dina asks if she knew him. Jack advises she was married to him, and promises to set the family right again. Dina asks, “Remind me again who you are.” Billy comes downstairs, and declines Phyllis’ call before greeting Dina. Jack has something to show him. Traci, Abby, and Kyle join them as Jack announces they’ll be having breakfast together. They are all seated when Ashley appears. She sits and snarks that they can’t vote her out of the family. Breakfast proceeds quietly until Jack says they need to talk. Ashley wants to discuss Jabot, but Billy shakes his head – not after the hatchet job she did on his CEO position. He calls Kyle out for his plot to knock his ass out of the chair, and asks to be reinstated. Kyle points out Billy’s reckless. Jack wants to focus on being a family, and on forgiveness. He knows that is what John would tell them. Abby can’t get over what Billy did, and tried to cover up, but turns to Ashley and says what she did was so much worse. Ash apologizes for pulling Abby into this, and for making Billy feel disrespected. She won’t apologize to Jack, or beg anyone’s forgiveness. She’s bitter everyone gets a pass for conspiring against the family, but she’s a monster. Jack wants her to get over her persecution complex. Ash hollers he’s nothing like John Abbott. Billy heads to Jabot. Dina cries because they’re all so angry. Kyle follows Billy and confronts him about having sex with Summer; he needs to let her know where she stands. At the table, Traci’s disappointed in Ashley, who is also disappointed in her. After, Jack takes Kyle to task for luring Billy into gambling. Kyle regrets siding with Ashley against Billy now. Jack hopes Billy will forgive him.

On the Crimson Lights patio, Mariah gifts Tessa with a necklace. She hopes Tessa will come on her next trip, but Tessa can’t miss a minute of work as she has to pay the ‘sharks’. She updates that she’ll be done paying in about a year. Mariah’s disturbed. She spots Sharon with Rey inside and learns Sharon had dinner with him while she was gone. Inside, Rey teaches Sharon how to interrogate a witness. Mariah appears, so Sharon pulls her away to catch up. Sharon relays she’s trying to be strong and has no second thoughts about breaking it off with Nick. Mariah asks about her connection with Rey – she seems to trust him now. Sharon admits they’re friends, but he’s not a rebound. Phyllis arrives. Mariah wants to throw her out, but Sharon explains they have charity work together. Phyllis joins them as Sharon assures Mariah, “I can handle the bitch.” Sharon joins Phyllis on the patio, where they discuss Nikki paying a dollar to the blackmailer. Phyllis likes it, but Sharon worries it will antagonize the guy. Talk turns to Billy’s rehab. Sharon calls Phyllis another toxic habit he needs to quit. Inside, Mariah quizzes Rey about befriending Sharon and warns him it better not involve more benefits than free coffee. Rey reminds her he’s married; it’s platonic support. He then asks her about the party at Victoria’s when JT disappeared. Sharon overhears and interrupts to pull Mariah away. Rey wonders if Sharon’s irritated with him. Sharon complains she wants Mariah left out of the JT investigation. Rey reveals he assured Mariah they’re just friends. Sharon sputters, “Of course.” Later, Mariah tells Tessa that it’s weird Sharon was meeting with Phyllis, and odd she pulled her away from Rey – something’s going on.

Summer joins Billy in the Jabot office. He thanks her for coming. She’s ready to be a part of his new improved life, and believes they could be great together – there’s a reason he called her when he hit rock bottom. Billy says she’s right, there was a reason, but she won’t like it. Billy decides to be blunt – he has no romantic interest in her…none. Phyllis enters. Billy continues that he was just about to tell Summer the reason he slept with her was to get back at Phyllis. He concludes, “Now you know.”

At the Club bar, Kyle taunts Ashley about losing control of her experiment and being arrogant. Ash finds it priceless he’d talk to her about arrogance. Kyle muses she would have gotten away with it had she paid Andrew with her own money. He regrets having the audacity to believe he was better than Billy, and teaming up with her.

At the Abbott house, Ashley tells Jack, Abby, and Traci she’s moving out. 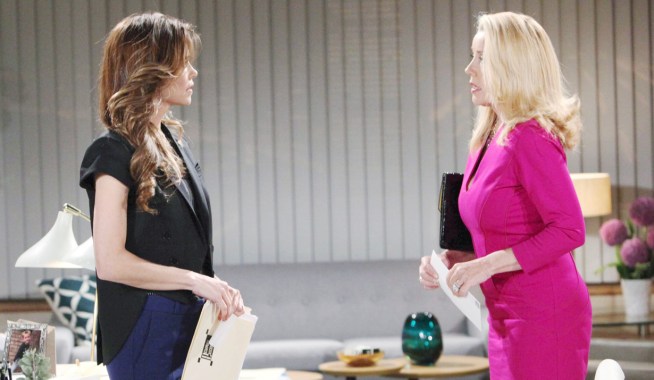 Phyllis Smacks Billy for Having Sex With Summer 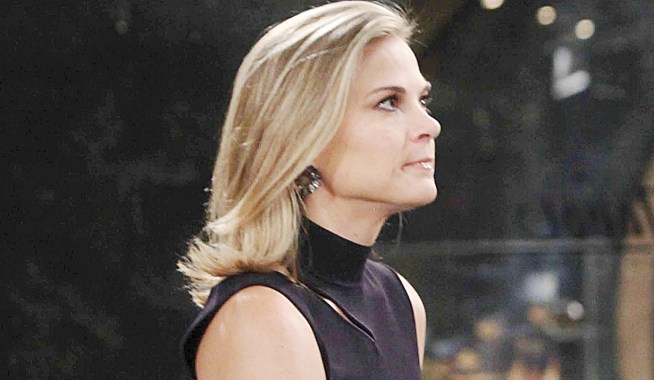