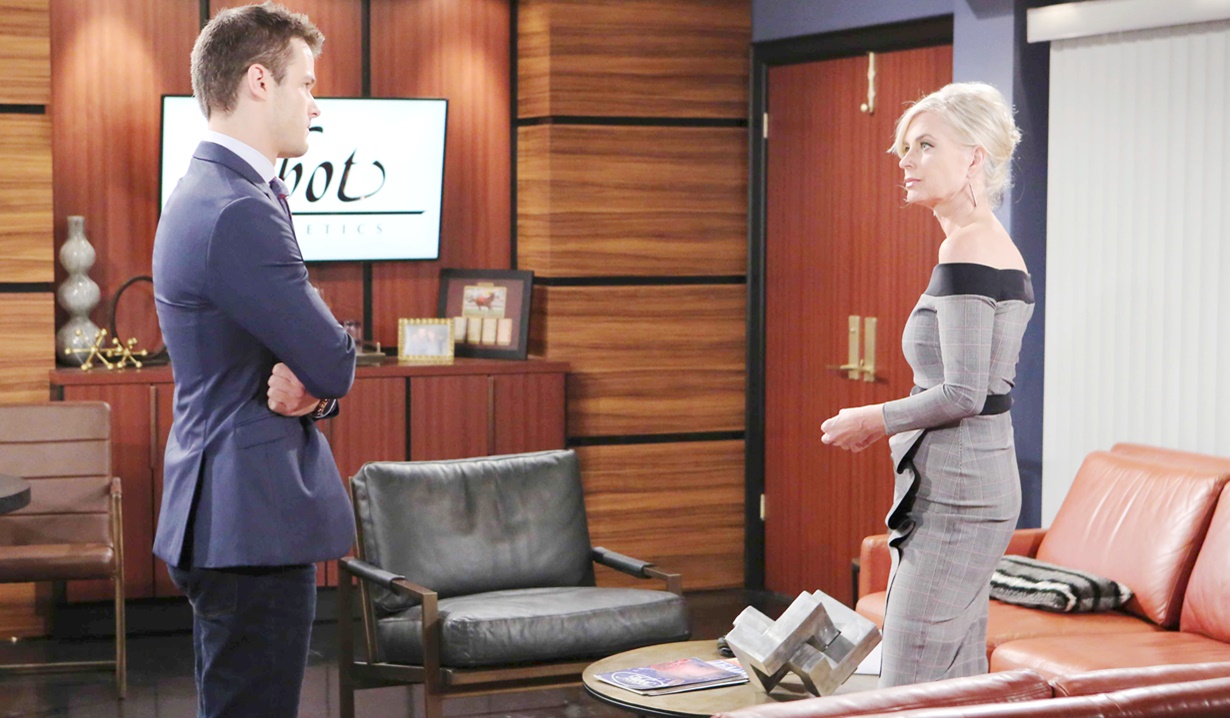 In the Club, Nikki and Summer dish on Nick and Sharon’s wedding debacle. Nikki notes Phyllis and Billy broke up and speculates on whether they’ll get back together – she’s glad Vikki’s not picking up the pieces from his gambling. Summer thinks he needs someone who can make him happy – not her mother. Talk turns to the situation at Jabot. Summer only knows Billy made some questionable choices. Nikki hopes he grows from it and leaves his mistakes behind him.

At Newman Enterprises, Victoria’s panicky after having received the cryptic note and reads it again. Later, Nikki arrives and senses something’s bothering Victoria, who shows her the note. Nikki’s disturbed and clarifies that there’ve been no calls or texts. Victoria nixes her idea to hire a discreet private investigator. Nikki decides it could be a prank and they should ignore it. Vikki promises to try not to obsess over it. After a time, Nikki returns, she received a note identical to Victoria’s. Vikki says it has to be about JT. They puzzle over who is taunting them and what they hope to gain. Nikki suggests Victoria leave town, but her daughter snaps at her. She apologizes and complains her nightmares are coming back, in fact, they’re living in one.

At Jabot, Neil arrives to find Ashley planning a meeting. They laugh as he gifts her with a pillow that indicates she’s the boss, talk about having dinner, and kiss.

At Crimson Lights, Tessa gives Lola a bag of power tools left for her by Rey. Kyle appears and buys Lola’s coffee. Tessa realizes she’s the woman he was excited about previously. Kyle updates Lola on the changes at Jabot. He gets a text about a staff meeting and Lola gives him a pep talk. He asks about their date. Lola suggests a movie. They agree to meet back there at 5:30 sharp, and Kyle exits. Tessa asks Lola how they met. Lola admits she’s looking forward to their date. Tessa is too, since Kyle’s ex is a nightmare. Lola learns he dated Summer Newman and they’re nothing alike.

Ashley’s staff meeting is underway at Jabot when Summer arrives late. Ashley notes Phyllis is also late. Lauren will update her. Ashley makes a speech about John’s vision for the company – she’s returning the focus to R&D and will take the funding from Jaboutiques. Kyle pipes up that he did a comprehensive review on the boutiques…but she won’t like his conclusions. Ashley reads it and is impressed. She thanks him for the tamales. He realizes Lola sent them on his behalf. Ashley decides that they’ll go ahead with Jaboutiques. Kyle clarifies that his vote yesterday was not a comment on her leadership. She realizes he was supporting his dad. Kyle suggests she make him her COO. Ashley’s leaving that position vacant for now. Kyle’s irked. Ashley confronts him about the tactics he used to oust Billy – she could have fired him. Kyle complains she had him doing the dirty work while she kept her hands clean and warns the world will catch up – he can’t wait until her true colors show.

At the Club, Ashley is celebrating with Neil when her consultant, Andrew, (played by Coby Ryan McLaughlin), shows up. He watches from a distance as she tells Neil she’s not proud of everything she did to make it to this milestone. Andrew approaches the table and asks to steal Ash for a moment. They step away, and Andrew wants to cut a new deal in light of her success. He suggests she double his monthly salary. Ash informs him she’s cutting it to zero since his services are no longer required. Andrew supposes secrecy is no longer required, which gets a reaction from Ash. He tells her he’ll be in touch.

Kyle meets Lola on Crimson Lights patio and thanks her for the sweet gesture of the tamales. He reports Ashley rewarded him with a knife in the back, but changes the topic to her truck. She dreams of opening a restaurant. Lola mentions him dating Summer Newman, and he realizes Tessa told her. He explains they’ve both moved on. They pinkie swear to be mature if Summer freaks out. As they wrap up their date, Summer watches from inside. Lola leaves, but returns to plant a kiss on Kyle. Summer’s eyes widen.

Ashley Becomes CEO of Jabot After...