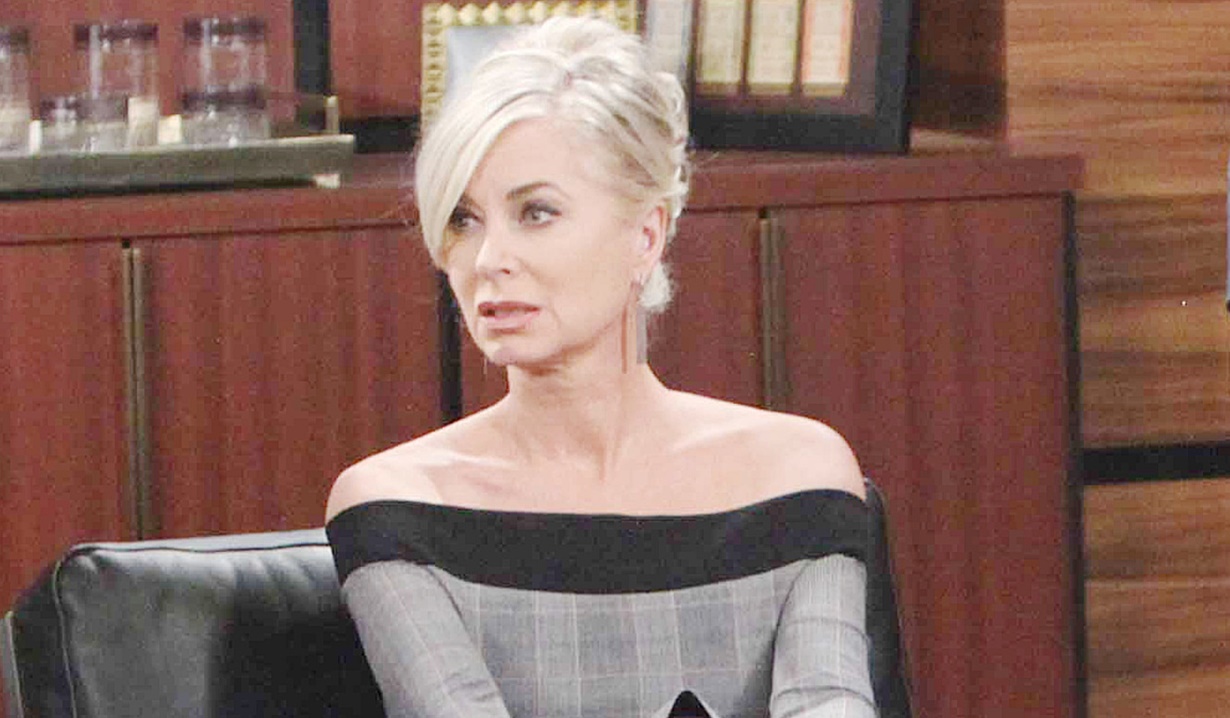 At home, Sharon and Mariah discuss Faith having gone to school after saying she never fully expected the wedding to happen. Sharon encourages Mariah to go to her planned location shoot, and reassures her she did the right thing by telling her about Nick and Phyllis.

At Jabot, Phyllis stalks past Ashley hidden under a hat. Ash joins Traci and Lauren and they agree Phyllis should have called in sick, but has guts. Ash wonders whether to involve her in their meeting. Lauren points out she’s hurting but showed up to honor her responsibilities. Traci’s worried Billy’s out on a bender since he didn’t come home.

Jack arrives at Dark Horse and tells Abby that Billy threw Phyllis out of the house. Tessa appears as Nick shows up and declares he’s starting over and still has every intention of marrying Sharon. Jack takes him to task for what he did to Billy. Alone with Abby, Nick muses about ending up alone. Victoria appears and recalls him taunting their dad about ending up that way – it’s ironic. Vikki asks why he would cheat on Sharon with Phyllis of all people. Nick explains he thought she was through with him, and Phyllis and Billy had just called things off. Victoria chirps, “Convenient!” Nick storms off – he needs to fix things. Jack appears and tells Abby they need to go to Jabot.

In her bedroom, Summer awakens with a smile, then realizes Billy’s gone. She texts him to come stay with her again tonight.

At Jabot, Phyllis texts Billy before taking a call from Summer, who wonders if Billy’s with her. Phyllis says he wants nothing to do with her thanks to Summer and her big mouth. Summer blames Kyle, and Phyllis rants about how angry Billy was with her. In the office, Ashley learns Billy checked into rehab. Traci’s relieved. Ashley announces she’s called an emergency board meeting so Traci can motion to remove the blood Abbott clause and be relieved of her position. Traci cautions her to slow down. Still in the hall, Phyllis is surprised when a temp filling in for Gloria calls her into the office. She joins Traci, Ashley, and Lauren and apologizes for hurting Billy. She invites them to let her have it. They fill her in on the emergency meeting and the need to protect Jabot and Fenmore’s. Traci thinks this should wait until Billy’s back from rehab. Ashley wants to proceed without even waiting for the others. Traci motions to remove the blood Abbott clause and Ashley seconds it. When Jack, Abby, and Kyle arrive, Ashley explains they voted to put the clause out of its misery…now they need to vote on a new leader. Ashley puts herself forth and Abby seconds it. Kyle whispers to Jack that he should be back in so they can run Jabot together. Kyle nominates Jack, and Traci calls for a vote. It winds up tied 3 – 3 and Traci abstains. Jack notes she already sided with Ashley previously. Kyle walks out and Phyllis follows. She accuses him of telling Sharon her secret, but he informs her Summer let Mariah overhear it. In the office, Lauren, Abby, and Traci congratulate Ashley, but Traci’s still uneasy about how this all happened. Ash’s left alone with Jack, who assures her he doesn’t resent her. He expresses regret over the blood Abbott clause and invites her to take the CEO seat – she’s earned it and John would approve. Sharon lets him know there was no wedding. They discuss there being only so many times people can forgive one another. Soon, Nick appears wanting to talk to Sharon, who is irked he’s at her place of business. Nick vows to fight for her as Rey materializes. Sharon ducks into the interrogation room. Nick asks for Rey’s help before leaving. Rey tells Sharon the guy doesn’t want to lose her, but she’s determined to move on.

At the Club, Tessa, wanting to treat her girlfriend, snaps at Mariah when she mentions the money she owes. Tessa apologizes; she just wanted to show Mariah how much she means to her. The pair decides their relationship won’t be like Nick and Sharon’s. Mariah feels lucky and will miss Tessa when she’s away. Phyllis appears to confront Mariah, who hisses she had every right to tell Sharon and advises her not to blame others because she got caught. Phyllis heads to the bar and runs into Nick. They compare notes as Sharon arrives and sneers, “Real classy.” Nick stammers this wasn’t planned and Sharon invites them to just do it on the bar. Phyllis insists Nick wants to marry Sharon, who calls her a conniving tramp. Phyllis complains about Sharon attacking her for speaking to Summer’s dad – they turned to one another in a weak moment and regret it. Sharon informs Nick that they are done, and advises Phyllis not to mess with her.

At Crimson Lights, Summer leaves Billy a voicemail – she can’t wait to see him again. On the patio, Summer spots Victoria opening mail. After, Vikki receives a cryptic note that says ‘I know what you did and I’m going to make you pay’.

Billy Has Sex With Summer After...